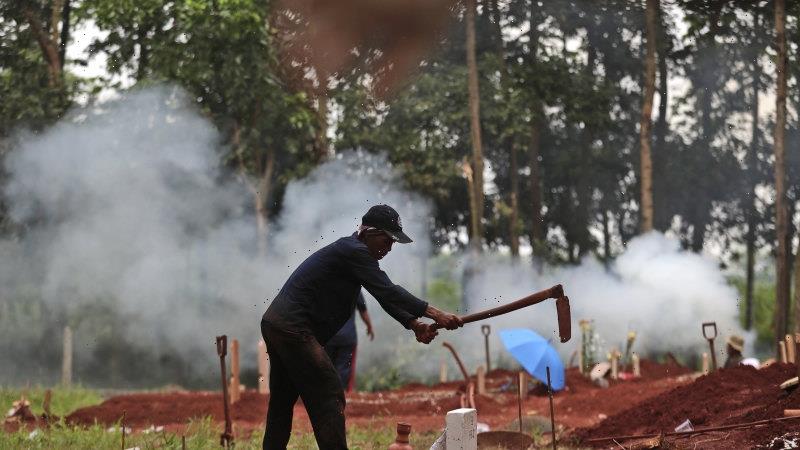 Singapore: Indonesia is making a new appeal for oxygen tanks as it enters its “worst case scenario”, surpassing even India and Brazil right now in new COVID-19 cases, but a leading epidemiologist believes the true number of infections there may be five to 15 times as high as what has been reported.

Unwanted records have been tumbling daily in the world’s fourth largest nation, which has faced shortages in hospital beds and oxygen as the Delta strain of the virus has triggered a devastating new wave across in the archipelago.

A gravedigger prepares a grave for a COVID-19 victim at Cipenjo cemetery in Bogor, West Java on Wednesday.Credit:AP

With 54,517 new cases on Wednesday, Indonesia surged past India, which has five times its population. It added another 991 deaths to surpass the per capita death rate in India at the peak of its outbreak in May and June.

As a percentage of population, Brazil still has double the daily COVID-19 deaths of Indonesia and Britain had six times as many at its lowest ebb last year, but south-east Asia’s largest nation has shown no sign of being able to slow down the rampant spread of the virus in the past six weeks.

With its health system under mounting pressure, Indonesia has already received support from countries including Australia with additional vaccines, ventilators, oxygen cylinders and medical equipment and ordered all industrial oxygen production to be directed towards the medical sector.

But senior minister Luhut Binsar Pandjaitan said on Thursday that the government began preparing for as many as 100,000 new cases a day, recruiting more than 2000 newly graduated doctors and 20,000 newly graduated nurses to be trained and added to the workforce. 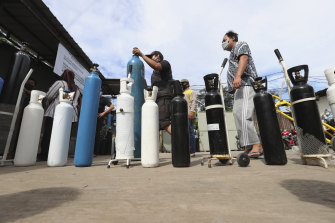 People queue up to refill their oxygen tanks at a filling station in JakartaCredit:AP

“We never imagined we would have the case as it is today with regards to oxygen,” he said.

“The issue now is with the ISO tanks [for liquid oxygen] as they are limited in numbers in the world. We are mobilising ISO tanks from various places in the country. We have asked Singapore [but] in fact they don’t have enough. We are now asking other countries such as the UAE and China.”

Luhut said Indonesia was “now entering the worst-case scenario period”, which he only last week set out as between 60,000 and 70,000 cases a day, and medicine was being imported for treatment of infected people with milder symptoms to reduce the demand for oxygen.

Indonesia, where overall cases have climbed to 2.67 million and the death toll has reached 69,000, is not alone in south-east Asia in facing its worst outbreak of the pandemic. Malaysia, Thailand, Myanmar and Vietnam are also enduring record infections and Cambodia hit a new high in daily deaths a fortnight ago.

However, public health experts estimate the real number of cases of the virus to be far in excess of what is being announced in Indonesia, even as the government moves urgently to correct under-reporting and lift low testing rates from from 100,000 a day to 400,000 a day.

“The situation is getting more critical obviously with such a sharp increase. In fact many are still under-reported,” epidemiologist Windhu Purnomo from Airlangga University in Surabaya told The Sydney Morning Herald and The Age on Thursday.

“In Surabaya [Indonesia’s second biggest city] itself the actual active cases could be 16 times higher and for East Java it could be five times higher. I haven’t counted the under-reported cases for Indonesia. My guess is between five to 15 times higher.”

Dicky Budiman, an Indonesian medical doctor and epidemiologist now based at Queensland’s Griffith University, has also said the true picture is far worse than what is painted by the official numbers and predicts the current surge may not peak until next month with as many as 2000 deaths per day.

The World Health Organisation’s new situation report on Indonesia, released on Thursday, reported a 44 per cent increase in infections and a 69 per cent rise in deaths in the country in the past week.

While the island of Java, home to 145 million people, has been the epicentre of the surge, there are increasing concerns about other regions with a 50 per cent rise in cases in the past week in 15 provinces.

Indonesia has begun administering booster shots of the Moderna vaccine to its medical workers after the deaths of at least 13 in Jakarta alone this month, even though the frontliners had been fully vaccinated.

Luhut said the government was using Facebook Covid-19 mobility data, Google Traffic and light intensity readings at night from NASA to measure the people’s movement during restrictions put in place on July 3, now enforced by more than 50,000 soldiers and police.