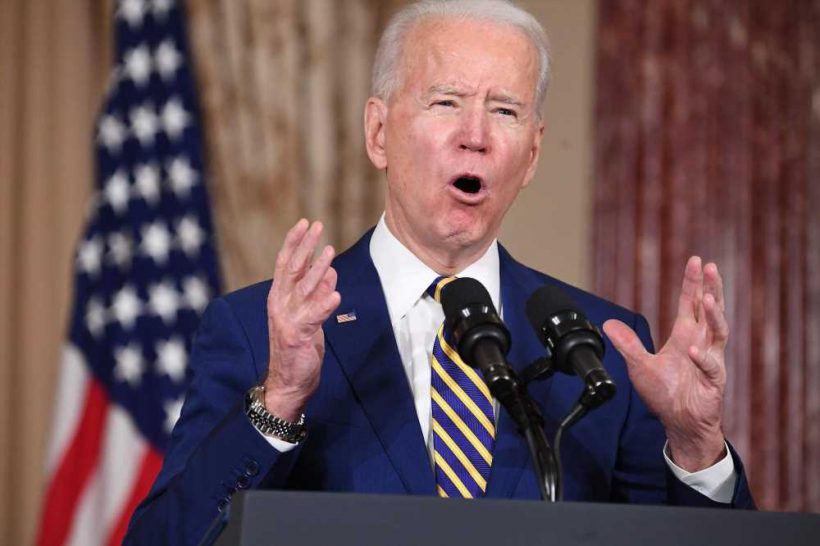 If it ain’t broke, Joe Biden will break it: Goodwin

The walls close in around Andrew Cuomo: Goodwin

The scare-Crow tactics of Democrats: Goodwin

A Monday New York Times front page headline on the explosion at a key Iranian nuclear facility claimed the “Attack May Hurt Efforts to Reboot 2015 Deal.” On Tuesday, also on the front page, the paper declared that “Israel’s Role in Iran Blast Casts A Shadow on U.S. Nuclear Talks”

Get it? Making a new deal with Iran is a very good thing, anything that hurts the chance is a very bad thing, including Israel.

Here’s an alternative view: the Times is still drinking the Kool-Aid that the original Iranian nuclear pact was a success and is worth saving. To committed dead enders, Iran’s violations of the terms and spread of regional terrorism are irrelevant.

The cult surrounding the deal at the Gray Lady includes the paper’s editorial board. Its Saturday screed, written before the weekend attack, began by saying “There exists now a brief window of time” for President Biden to reach a new accord. The reason: Iranian moderates could be gone by summer. Ah, yes, Iranian moderates, the unicorns that only blinkered leftists can see. So let’s hurry and make a deal, any deal.

The Times, of course, spews a lot of nonsense that is safely ignored, but this time it’s singing in harmony with Biden. The president is so eager to rejoin the pact Donald Trump wisely scuttled that he’s willing to help pin the blame on Israel for the sabotage of the underground facility at Natanz. With initial speculation that the U.S. and Israel cooperated on the attack, as they had in a cyber attack in 2010, the White House quickly denied any role in the operation, which knocked out all power to the centrifuges. “The U.S. was not involved in any manner,” press secretary Jen Psaki said Monday.

So much for the usual diplomatic ambiguity that would protect an ally and give the U.S. more flexibility when it is questioned in the future about classified operations.

But Biden clearly has no interest in protecting Israel’s likely role. On the contrary, he’s served notice in numerous ways that the full American embrace the Jewish state enjoyed in the Trump years is history.

Indeed, the efforts to separate from Israel and woo Iran illustrate how Biden is determined to breathe new life into the foreign policies of the Obama-Biden administration, even the failures. Chief among them is casting Israel as more of an obstacle to peace than a unique friend and ally.

A clear example is that Biden’s already given the Palestinians two gifts — hundreds of millions of taxpayer dollars and the heckler’s veto over America’s policies on their dispute with Israel. Trump had stopped the payments in part because some of the money went to salaries for the families of terrorists. Besides, Palestinian leaders refused even to talk to the Trump team, so why should they get rewarded with American cash. They shouldn’t but, incredibly, neither of those issues seems to bother Biden. Full speed backwards.

As for the Abraham Accords, the historic alliance between Israel and four Muslim nations, a new State Department spokesman couldn’t even bring himself to say the official name of the agreements. Had Trump been re-elected, it’s probable the Saudis would have signed on and gone public with their secret Israeli ties, perhaps even agreeing to full diplomatic recognition. That would be an unprecedented seismic shift, yet Biden began his administration by insulting the Crown Prince by saying he would only talk to the King.

He also cut our military support for the kingdom’s war in Yemen against the Houthis, a terror group that has been attacking Saudi oil fields.

The Houthis themselves offer a window into Biden’s strange priorities. Although — or perhaps because — the Houthis are funded and armed mostly by Iran, he removed the terror designation that Trump imposed on the group in the waning days of his administration. Trump’s action was a slap at Iran and a gift to Saudi Arabia, and Biden has reversed that. Again, why?

Still, the timing of the Natanz explosion is important, coming just after Iranian and US negotiators had their first round of meetings. With much of the Israeli press assuming it was a Mossad operation, the Times and Biden seem to have concluded the goal was to thwart progress that could lead to a new nuclear pact. They could be right, but here’s another, more likely possibility. Israel doesn’t trust Biden to make a good deal or Iran to abide by any restrictions. Therefore, Israel acted to set back the mullahs’ nuke program while it had an opening and before it was too late. As Prime Minister Benjamin Netanyahu said Monday, “I will never allow Iran to obtain the nuclear capability to carry out its genocidal goal of eliminating Israel.”

Whether the United States still shares that commitment is unclear. That doubt is a formula for trouble that already has emboldened Iran and led Israel to act without waiting for American approval or help.

Reader Ruth Cohen is baffled by the fights over early voting and other rules. She writes: “What is wrong with one election day? People know the date months in advance. They can prepare by registering, making sure there is child care, someone to bring them to the polls if they are disabled. “They can set the alarm clock to waken early, and eat and get hydrated. Everyone has one birthday, one anniversary; there is one Christmas Day. What is the rationale for 12 or 17 days, even voting within a month ahead of election day?”

Yahoo posts a detailed story from the Albuquerque Journal about the governor of New Mexico, Michelle Lujan Grisham, paying $62,500 to a former staffer to settle a sexual mistreatment suit. It’s a good read, but the story doesn’t say which party the governor belongs to.

That’s how you know she’s a Democrat.

Scared of the subway

The findings are such a no-brainer that you wonder why the MTA bothered to do a poll. Then you remember City Hall needs yet another reminder that subway crime terrifies riders and keeps other people off the trains. Some 72 percent of current passengers say they are “very concerned” about safety. Only 26 percent declared themselves “satisfied” about crime and harassment conditions, a 15 point drop from September. Some 36 percent of those who stopped riding cited crime as the reason.

“Our riders have sent a clear message,” interim transit president Sarah Feinberg told the Post. “If you make the system safer, [they] will come back.” The survey of 25,205 people should be a wake-up call that more cops are needed. But Mayor de Blasio, his term winding down and the NYPD shrinking, is less interested than ever in doing anything. Remember the survey the next time officials complain about ridership being far below pre-pandemic levels. There’s a good reason.