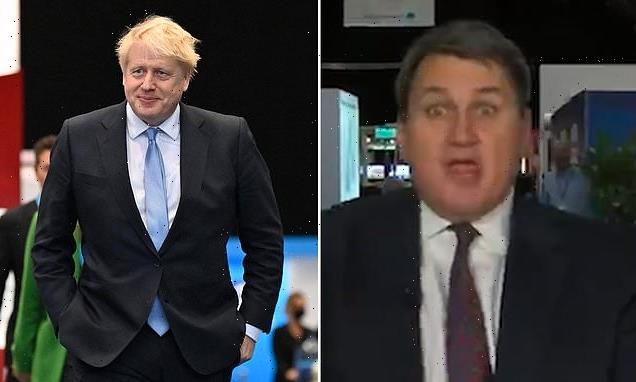 He’s behind you! Kit Malthouse says he ‘has no idea’ where Boris Johnson is live on GMB – before the camera pans to the PM talking a few feet away

Policing minister Kit Malthouse made an embarrassing gaffe life on TV today when he claimed he had ‘no idea’ where Boris Johnson was – before the camera panned to show the Prime Minister just a few feet away from him.

Mr Malthouse was being interviewed by Alastair Campbell on ITV’s Good Morning Britain when the clanger occurred earlier today.

Asked if the PM was ‘honest all the time’, he replied: ‘In my experience, yes he is.’

Mr Campbell’s co-presenter Susanna Reid then asked: ‘Are you having to say that because he’s sitting right next to you, Mr Malthouse?’

In response the minister claimed: ‘I have no idea where he is,’ before awkwardly following up with ‘oh, he’s right there,’ as the camera turned to show Mr Johnson being interviewed, barely a stone’s throw away. 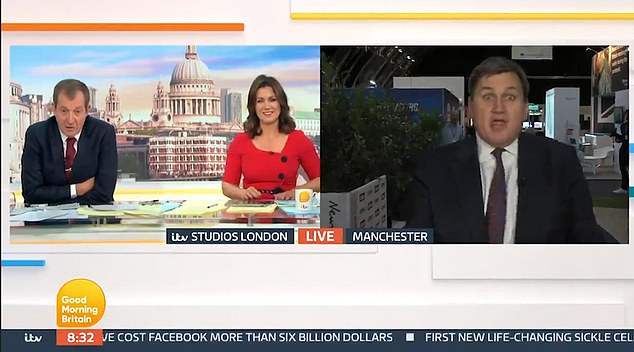 Mr Campbell questioned why the premier would not agree to an interview with GMB, having last appeared on the programme more than four years ago.

A visibly irritated Mr Malthouse then added: ‘Is there any chance we could talk about something of substance and importance to the British people today?

‘I realise, Alastair, you’re there to try and make some kind of political point.

‘I’m not sure everybody would regard you as an impartial observer, but if you want to talk about crime or violence or some of those issues, I’m presenting myself to talk to you.’

The embarrassment came as Mr Johnson today defiantly dismissed fears over spiking inflation and supply chain chaos today, saying the UK is switching to a ‘new approach’ and it is not his job to fix all the problems for business.

In interviews at Tory conference that will spark fresh fury from industry, the PM denied that the country is in ‘crisis’ comparing the disruption to a ‘giant waking up’ and ‘creaking’ after the pandemic.

Despite Cabinet ministers telling MailOnline they were concerned about ‘complacency’ about inflation, now on track to be double the Bank of England’s target, Mr Johnson said he was not ‘worried’ about it running out of control.

He also pushed the responsibility for solving the problems back on the private sector, insisting it is ‘not the job of government to come in and fix every problem’. 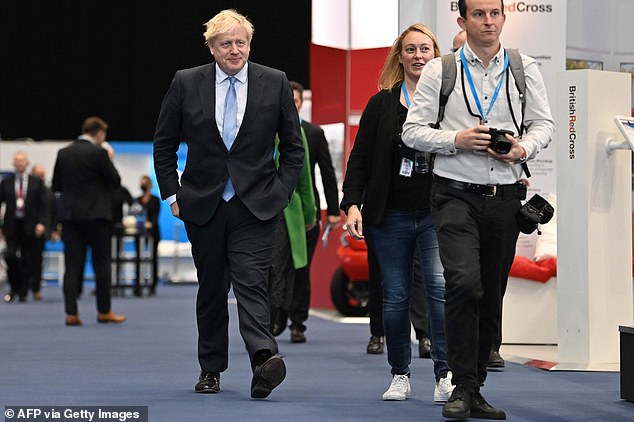 But he admitted that Christmas might only be better from a ‘low base’ amid fears of ongoing shortages – after it was effectively cancelled during the pandemic last year.

And he conceded that the government’s efforts to bring in more lorry drivers from abroad are having limited success, with just 127 having applied for emergency visas.

The uncompromising line from Mr Johnson came as new figures showed pump prices have hit 136.10p per litre, the highest level since September 2013

Tensions have been rising between ministers and business over the crisis, with Foreign Secretary Liz Truss warning that firms will be to blame if the festive season is blighted by shortages and price rises.

One Cabinet source told the Telegraph that companies have been ‘drunk on cheap labour’ and failed to plan for the changes.