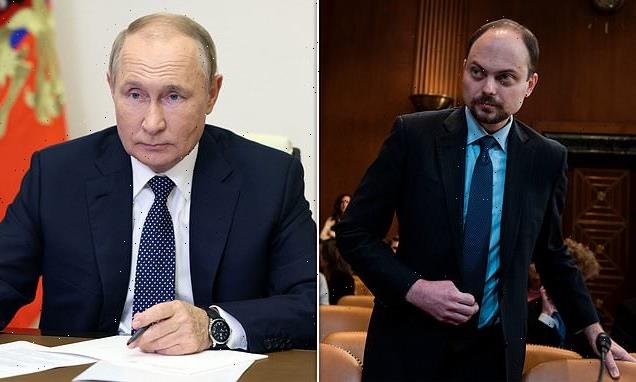 Russian authorities have charged a prominent opposition activist who was jailed for allegedly spreading ‘false information’ about Russia’s military operation in Ukraine with treason.

The charges against Vladimir Kara-Murza Jr stem from speeches he gave in several western countries that criticised the Kremlin’s rule, according to his lawyer, Vadim Prokhorov.

They included an address to the Arizona House of Representatives in which he said President Vladimir Putin was bombing Ukrainian homes, hospitals and schools.

Mr Kara-Murza denies committing treason, the lawyer said. If convicted, he faces a possible prison sentence of up to 20 years.

The activist, who holds both British and Russian citizenship, was previously arrested in April and declared a ‘foreign agent’. He is currently in pre-trial detention on suspicion of spreading false information about Russian armed forces. 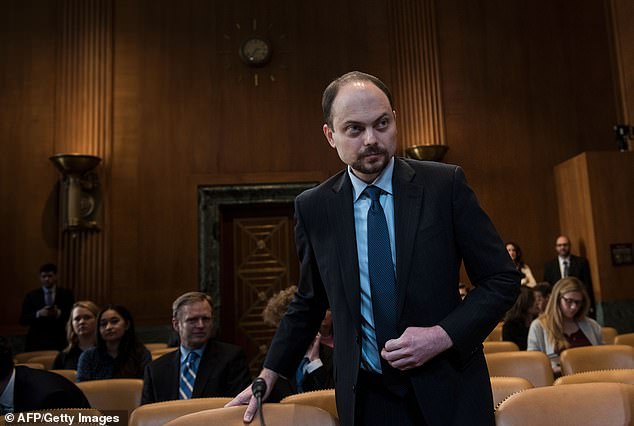 The criminal case for treason against Mr Kara-Murza was opened in connection with three of his public speeches, including a March 15 address in Arizona during which he denounced Russia’s military action in Ukraine.

‘These speeches did not carry any threat to the country; it was public, open criticism,’ Mr Prokhorov told Russian state news agency Tass.

Russia adopted a law criminalising spreading ‘false information’ about its military shortly after Russian troops rolled into Ukraine on February 24.

Authorities have used the law, which authorises a prison sentence of up to 15 years for a conviction, against dozens of people to stifle opposition to what the Kremlin calls ‘a special military operation.’

Mr Kara-Murza, a journalist, was an associate of opposition leader Boris Nemtsov, who was shot dead in central Moscow in 2015.

He himself survived poisonings in 2015 and 2017 that he blamed on the Kremlin. Russian officials have denied responsibility.

Moscow has said it does not deliberately target civilians, but thousands have been killed in Ukraine. On Thursday, at least three died when a Russian missile destroyed an apartment block in the city of Zaporizhzhia. 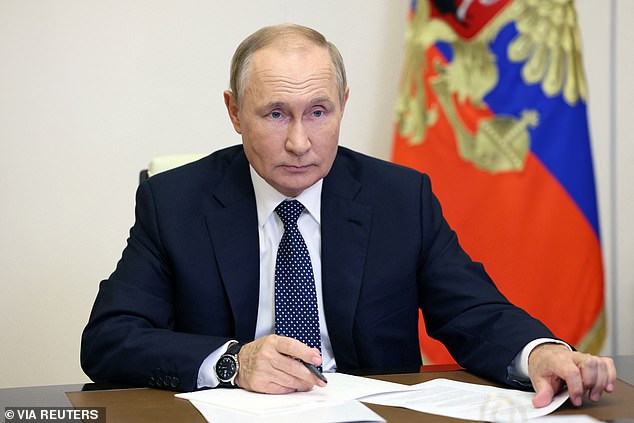 The charges against Mr Kara-Murza stem from speeches he gave in several western countries that criticised the Kremlin’s rule. Russian President Vladimir Putin is pictured on Wednesday

Mr Kara-Murza spoke out about the alleged poisonings back in 2017 during an interview with 60 Minutes.

He said claims he was poisoned the first time in May 2015, when he was at a work meeting with colleagues in Moscow.

Mr Kara-Murza said that within about 20 minutes he went from feeling perfectly normal to incredibly sick.

‘Then I don’t remember anything for the next month,’ he said of the poisonings.

Despite a toxicology lab in France finding no evidence in his blood of any specific toxin, Mr Kara-Murza maintained convinced that he was poisoned by the Kremlin.

‘I have absolutely no doubt that this was a deliberate poisoning, that it was intended to kill because, as I mentioned already, the doctors told my wife that it’s about a five per cent chance of survival. And when it’s that kind of chance, it’s not to scare. It’s to kill,’ he explained. 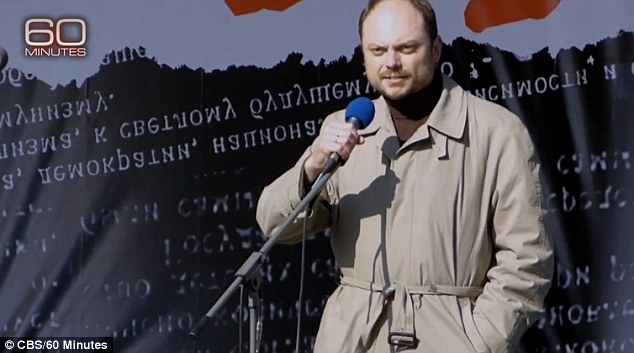 Mr Kara-Murza spoke out about the alleged poisonings back in 2017 during a 60 Minutes interview. He said claims he was poisoned the first time in May 2015, when he was at a work meeting with colleagues in Moscow 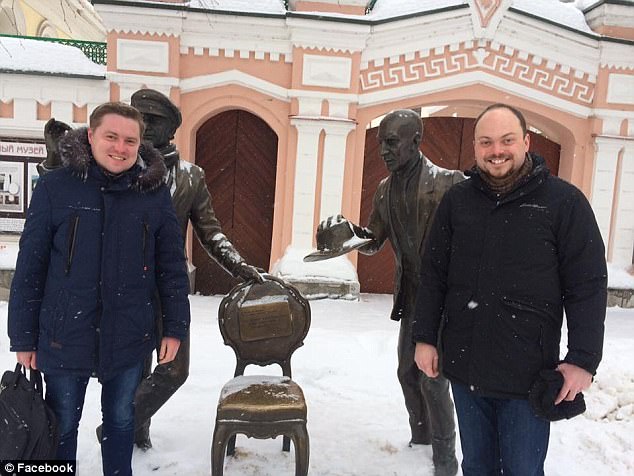 Despite a toxicology lab in France finding no evidence in his blood of any specific toxin, Mr Kara-Murza maintained convinced that he was poisoned by the Kremlin

As soon as Mr Kara-Murza improved, he was itching to get back to Russia to continue his work.

Even though threats against him had intensified, he continued his opposition work when he was poisoned again for the second time in March 2017.

‘All of a sudden he begins experiencing this very elevated heart rate, his blood pressure drops very low,’ his wife, Yevgenia, said of the alleged attack. ‘He begins sweating and he has trouble breathing’.

The couple believed that Mr Kara-Murza was poisoned the same way as before.

However, the second time he was taken directly to the same medical team that treated him in 2015, who knew exactly what they were dealing with and how to handle it.

Yevgenia said: ‘The Russian doctors’ official diagnosis is an acute intoxication by an undetermined substance, which is poisoning’.

However, despite believing that he’s been poisoned twice by President Vladimir Putin, Mr Kara-Murza vowed to return to Russia.

‘I’m the fortunate one, I’m still here I’m still talking to you, many of my colleagues cannot do that,’ he said in 2017. 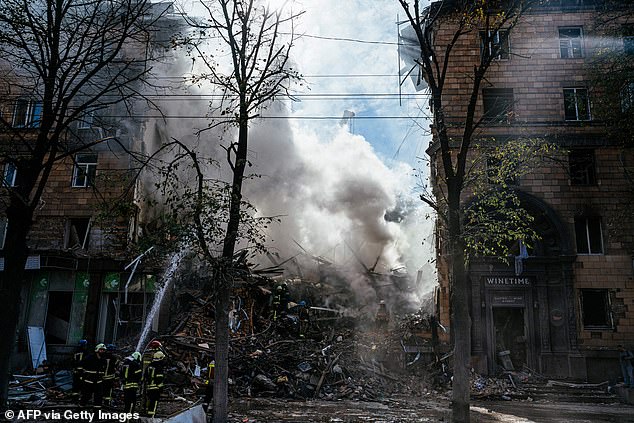 The charges against Mr Kara-Murza followed news that seven Russian rockets slammed into residential buildings in Zaporizhzhia, Ukraine before dawn on Thursday. Pictured: Ukrainian firefighters battle a blaze after the strike in Zaporizhzhia 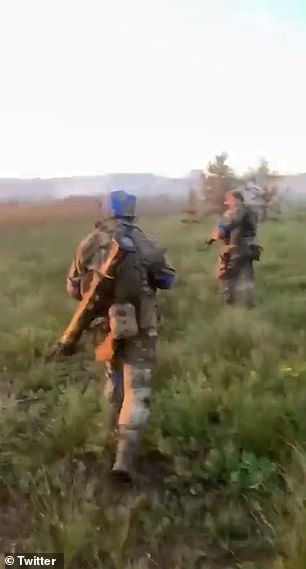 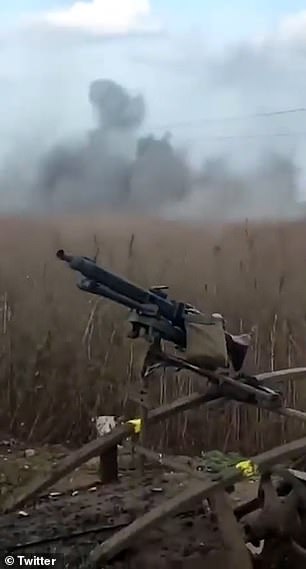 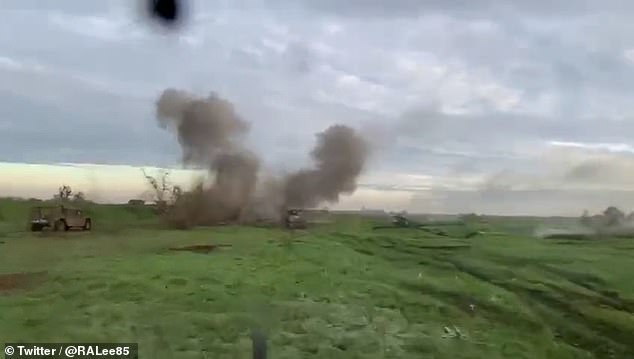 Ukrainian Humvees donated by the US are filmed racing across a battlefield as they attack Russian lines in Kherson, amid a major counter-offensive

The charges against Mr Kara-Murza followed news that seven Russian rockets slammed into residential buildings in Zaporizhzhia, Ukraine before dawn on Thursday.

Three people were killed and least 12 wounded in the city close to Europe’s biggest nuclear power plant, the governor of the mostly Russian-occupied region said.

The strikes came just hours after Ukrainian President Volodymyr Zelensky announced that the country’s military had retaken three more villages in one of the regions illegally annexed by Russia.

‘Absolute meanness. Absolute evil,’ Mr Zelensky said of the attacks, in a video speech to the inaugural summit of the European Political Community in Prague.

‘There have already been thousands of manifestations of such evil. Unfortunately, there may be thousands more.’

Ukraine has pushed Russia back by 12 miles in the south. Dramatic footage reveals the blistering pace of attacks that have sent Putin’s men fleeing for their lives.

Videos taken in Kherson in recent days show Ukrainian forces storming Russian defences in American-made Humvees under artillery fire, and soldiers advancing en masse across fields in the face of the retreating enemy.

Ukraine’s offensive in Kherson – which has been grinding on for more than two months – entered a ‘new phase’ on October 2 with Kyiv’s men advancing 12 miles down the Inhulets and Dnipro rivers, Britain’s MoD said today.

Meanwhile, more footage shows Ukrainian soldiers fighting near the city of Lyman, in the north of the country, which fell to Kyiv’s men at the weekend – exposing other Russian positions in the Donbas to further attacks.