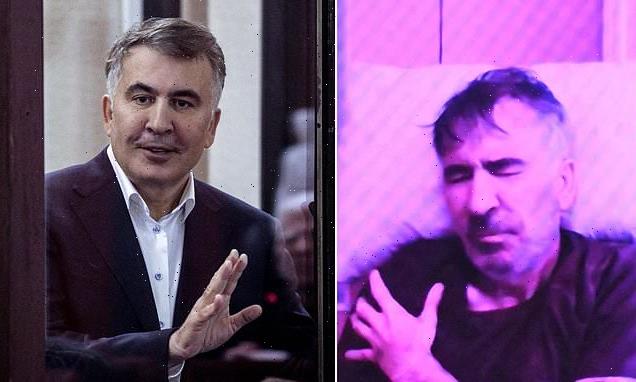 Vladimir Putin’s ‘arch-nemesis’ and most outspoken opponent is being poisoned in jail, his family claim

Vladimir Putin’s most outspoken opponent and ‘arch-nemesis’ is being poisoned in his prison cell, his family and lawyers have claimed.

Mikheil Saakashvili, 54, a former president of Georgia, appeared extremely frail and unwell as he appeared in court via video link in the ex-Soviet state.

He had been sentenced to six years in prison on October 1 last year after being accused of abuse of power, charges his supporters say are politically motivated.

Mr Saakashvili’s lawyers have revealed that samples of mercury and arsenic have been found in his system according to a report by an American toxicologist. 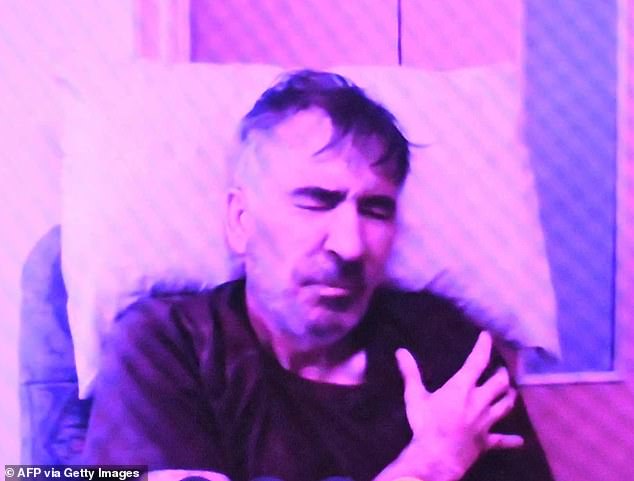 Georgia’s ex-President Mikheil Saakashvili, 54, looking very frail and unwell as he appears via a video link from a clinic during a court hearing in Tbilisi, Georgia on Tuesday 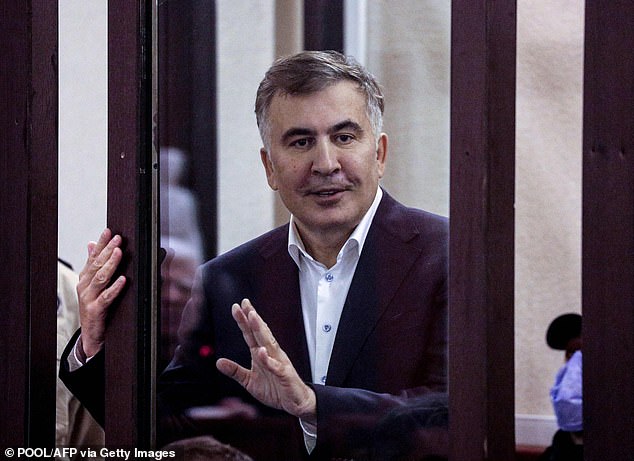 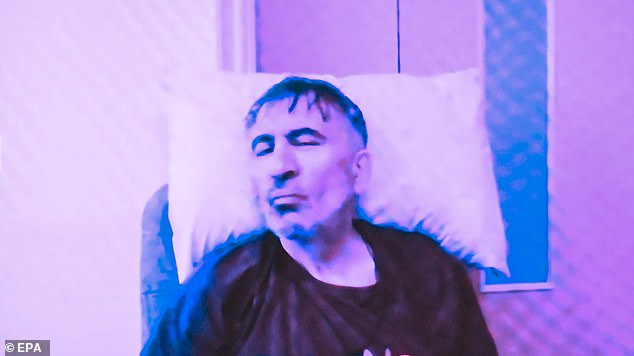 His lawyers obtained hair and nail samples after a recent visit to the prison in Georgia.

His son Eduard told the EU parliament that his father should be allowed to seek treatment in another country and ‘there is indications that he has heavy metal poisoning, mercury and arsenic, in his body. So the situation is really urgent.’

The report says Mr Saakashvili’s poor health is ‘the result of heavy metal poisoning’ and that it was not possible for them to be in his system as a result of medical treatment, according to Radio Free Europe.

Continuing the analysis, Professor David Smith said: ‘To a reasonable degree of certainty, these agents were introduced after Mikheil Saakashvili’s incarceration.’

Putin once said he would ‘hang him by his balls’ during Russia’s invasion of Georgia in 2008 which was successfully successfully repelled by then-President Saakashvili.

His mother Giuli Alasania has said her son is ‘on the verge of death’, suggesting the Russian state has poisoned their ‘enemy’. 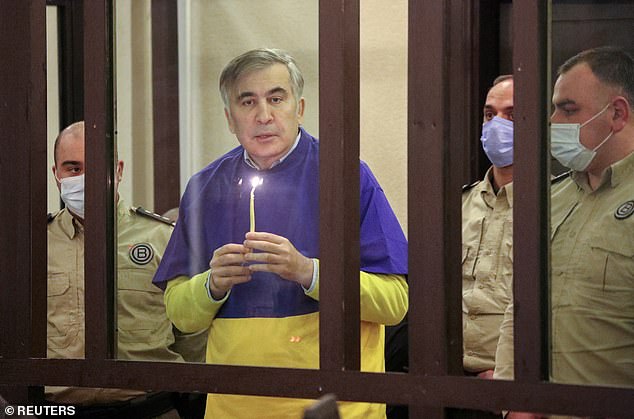 Georgian former President Mikheil Saakashvili, who was convicted in his absence of abuse of power during his presidency and arrested upon his return from exile, holds a candle while praying for Ukraine in a defendant’s dock during a court hearing in March this year

But she said in early December that she wanted to make her point ‘clear’ that they are not accusing the Georgian government of poisoning her son, adding that ‘if deadly poisoning really took place’, it is in the ‘style of a foreign country… who considers Misha as an enemy’.

First convicted in absence in 2018, Saakashvili worked for different Ukrainian governments, including Volodymyr Zelensky’s administration, before returning home and being detained in 2021.

‘People forget that in 2008 he did what he is doing now to Ukraine to Georgia – under cover of darkness he invaded Georgia.

‘And just like President Zelensky is doing today in Ukraine, Saakashvili stood up and fought back, and because of this the Kremlin and Putin specifically became his arch-nemesis, number one enemy.

‘Everything that Saakashvili did in Westernising the country was against what Putin wanted.’

Eduard told CNN that it was ‘really awful’ to see his father in his ill state but that his father did not have regrets for standing up to Putin, but that it may have been a misstep to return to Georgia.

‘It’s way worse than anyone has been expecting. It’s one thing putting someone in prison but to put somebody in this state after a year of imprisonment when they are on the verge of fighting for their life – that’s unexpected.’ 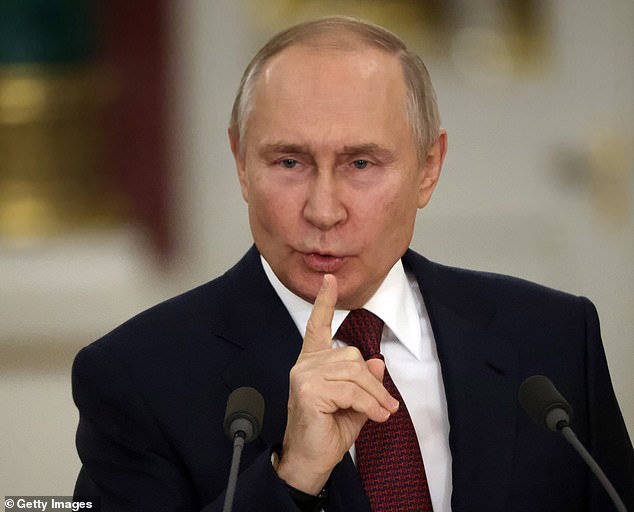 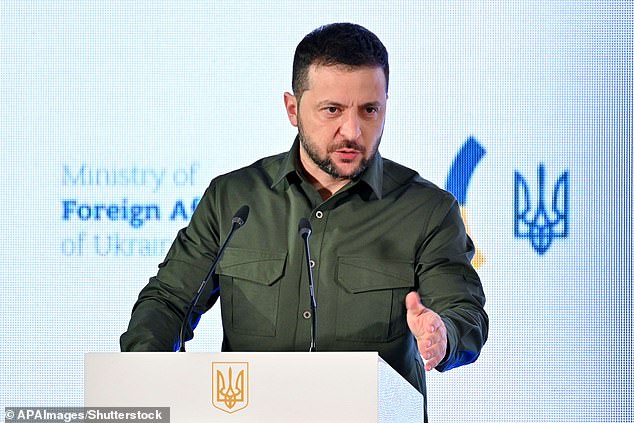 Saakashvili has launched a number of hunger strikes and his lawyers want his sentence suspended so he can seek treatment abroad.

Ukrainian president Volodymyr Zelensky has appealed to the Georgian government to allow Saakashvili seek treatment in his country.

‘Everyone has probably seen the state of Mikheil Saakashvili’s health. I appeal to the people of Georgia, to the authorities of Georgia,’ Zelensky said earlier this week.

‘It is necessary to show mercy, especially as Christmas approaches. What is happening to Mikheil now is cruelty. It does not become Georgia. It must be stopped.’

Zelenskiy asked that Saakashvili, 54, be transferred to a medical facility in Ukraine, Europe or the United States.

Saakashvili, who is being treated in a Tbilisi clinic, last week declared a new hunger strike in protest at not being allowed to attend a Tbilisi court hearing by video link.

He called it off hours later after being urged to do so by members of the European Parliament.

The court heard opening arguments from prosecutors before it adjourned until Dec. 22.

Georgian authorities say Saakashvili is ‘simulating’ the seriousness of his condition to try to secure his release. Saakashvili has not been seen in public for months. The European Union has called reports about Saakashvili’s health ‘worrying’ and called on the government to provide medical care.

Political poisonings have been connected to Putin and his government in the past.

An inquiry into the murder of Russian defector Alexander Litvinenko in 2006 ruled that his poisoning by radioactive polonium-210 was ‘probably’ approved by Putin.