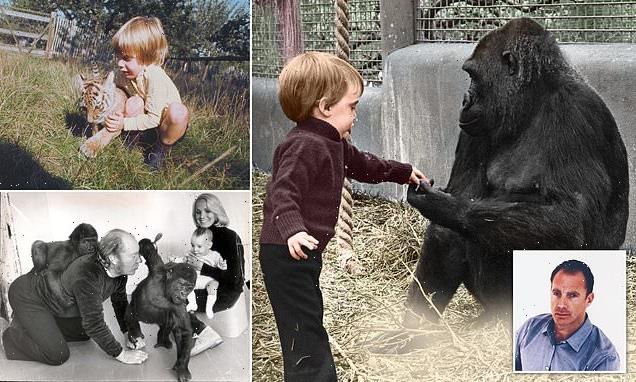 Bassa Wulfhere Aspinall’s life was all mapped out when he was six months old. His father, John, took him from his mother and handed him to Juju, a gorilla.

Cradling him in her huge, hairy arms, 180lb Juju promptly shimmied to the top of her enclosure, so she and her gorilla pals at Howletts Zoo could all have a good gawp.

‘They congregated and inspected me, looked in my nappy, then brought me down to my mother and handed me back,’ says Bassa, now 49 and an artist living in South Africa. ‘If she’d dropped me, I’d have been killed. But of course she didn’t.’

Instead, he went on to share his nursery, his cot and sometimes even his bottle with three baby gorillas from West Africa and the Congo.

His playmate was an elephant called Assam. He was cheered on at school sports days by his mother and two tiger cubs on leads.

‘My father used to walk a tiger on a leash at 3am in Eaton Square in London [until it killed a neighbour’s Alsatian with one swipe of its paw],’ he says.

‘Like other people might have a dog or a cat, we had lynxes, wolves, tigers, gorillas. They became my family.’

Every holiday was animal-related. 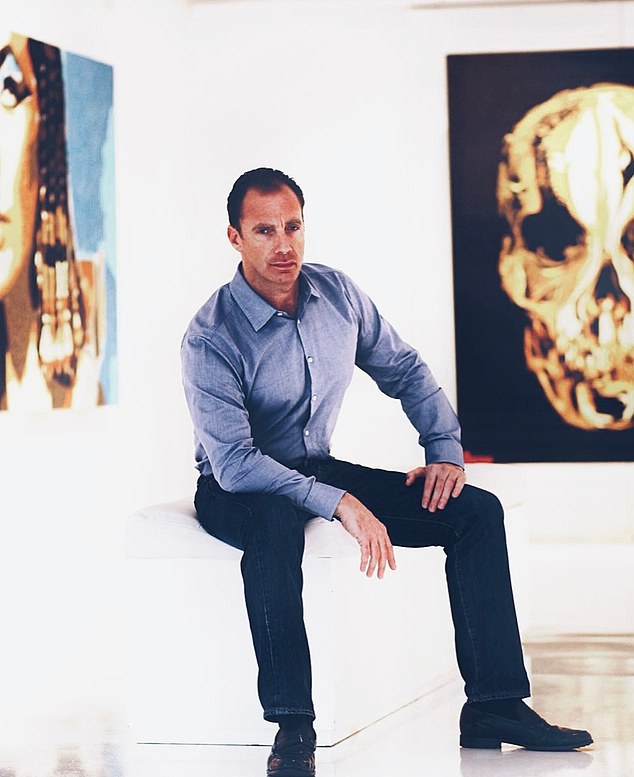 49-year-old Bassa Aspinall ran away from his birthright – the family’s Aspinall Foundation – and ended up in South Africa working as an artist, telemarketer, wannabe gangster, hotelier, businessman and husband 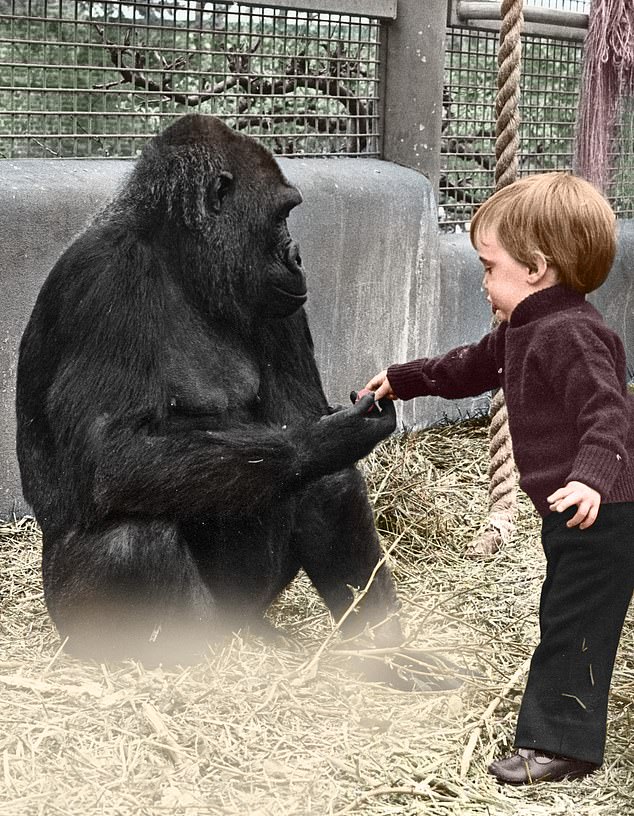 Bassa went on to share his nursery, his cot and sometimes even his bottle with three baby gorillas from West Africa and the Congo. Above: An 18-month-old Bassa plays with Juju the gorilla at Howletts Zoo

‘All my friends were going to the South of France or skiing or to Cornwall and I’d be dragged off to Sumatra to find the Sumatran rhino,’ he says.

‘I dreaded to hear where we were going for the next summer holidays. Not the bloody Galapagos Islands again!’

Every job he had as a teenager was carefully curated: ‘He forced me to be a tiger keeper and a gorilla keeper!’

That was because Bassa — younger son of the notorious casino owner and conservationist John Aspinall and his third wife, Lady Sarah — was earmarked to run the family wild animal business, the Aspinall Foundation.

Instead, it was Damian, the elder son from their father’s first marriage, who ultimately took control of the enterprise.

And in recent months he has run into some controversy over his management of certain aspects of it.

So hard that Bassa rebelled, ran away to South Africa at the age of 19 and has spent the past 30 years doing anything and everything — telemarketer, wannabe gangster, hotelier, businessman, husband, father of four and, lately, self-taught pop artist — except working with animals.

The closest he gets to them now is in his huge paintings, up to four metres square: he paints subjects ranging from film icons to rhinos and cheetahs, and six of his works will be on display at StART art fair at the Saatchi Gallery in London next month.

By his own account, Bassa is introverted, antisocial, doesn’t give interviews (until now), has no involvement with the Aspinall Foundation, only occasionally sees his half-brothers from his mother’s first marriage, and has no contact with Damian.

Which seems a terrible shame, as they all shared so much. Not least the pressure of growing up in the very choppy wake of their father.

It was John Aspinall who founded the toffs’ favourite casino, The Clermont Club. And also John who may — or may not — have helped his old pal Lord Lucan evade justice after he murdered his children’s nanny in 1974.

‘Dad lived his life the way he wanted,’ says Bassa. ‘He was like a CEO of a company. An alpha male who didn’t want our noise and energy around all the time, so in London they would live in the big house and we’d live 50 yards away in a mews house with a nanny.’

It is well-known that ‘Aspers’, as he was known to his chums, was an extraordinary force.

Charismatic, deeply sexist, clever, ruthless and with a tendency to bullying, he was obsessed with conservation, telling people he would happily sacrifice not only his life but the lives of all his family if he could save just one species.

But Bassa insists he had a relatively easy childhood. 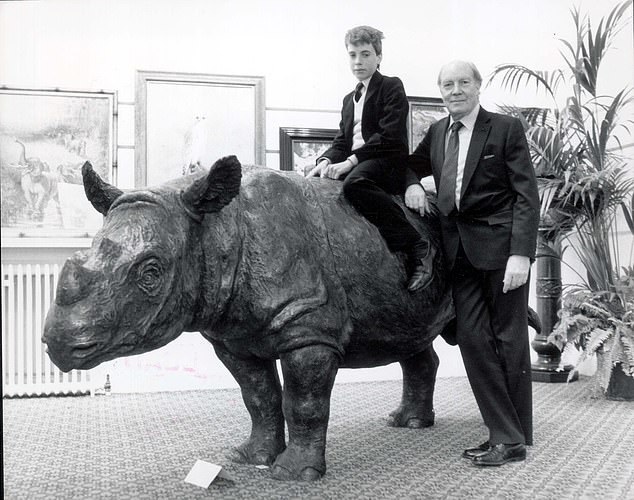 John Aspinall (right) and Bassa, 14, pose together at a wildlife conference in Guidhall, London

‘I was showered in love and I had my mother to protect me,’ he says.

‘Dad was a pretty dominant nightmare and had a very ruthless side, but I adored being his son. He was so magnificent that I thought I was some sort of special being.

‘I had an arrogant, completely undeserved, insane self-belief that I was the greatest, just because I was his son.’

Still, he found his father daunting and knew there was no hope of swaying him on anything, particularly not his miserable schooling at Rugby, where he was deeply unpopular.

‘I was bullied senseless. It was terrifying. They’d hang you outside your dormitory by your shirt collar, wake you in the night, strip you naked and chuck you in the quad,’ he says.

He begged and pleaded, as did his mother, but John — who’d had a terrible time there himself — wouldn’t budge. 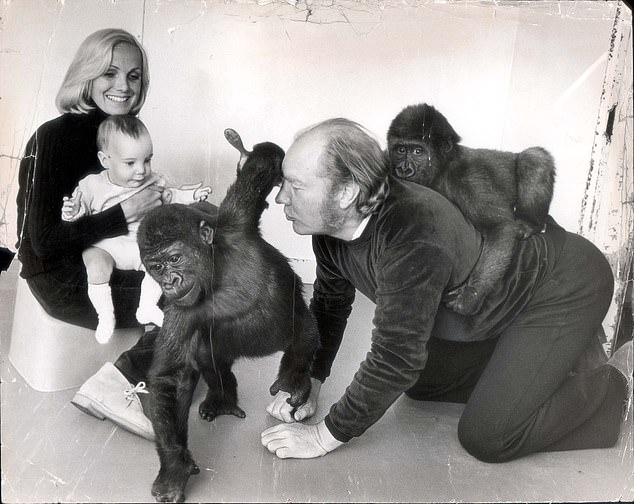 ‘Dad was a pretty dominant nightmare and had a very ruthless side, but I adored being his son. He was so magnificent that I thought I was some sort of special being.’

In the end, Bassa was thrown out at 17 for being disruptive, and went to the local crammer — where he skipped his Geography A-level exam to go and get drunk and, as soon as he could, moved 6,000 miles away to Cape Town.

It must have been hard for Lady Sarah. A 25-year-old widow (her first husband, racing driver Piers Courage, was killed in a race) with two sons (Bassa’s half-brothers, Jason and Amos) snapped up by a fortysomething grizzly like Aspers with a lot of animals to hand-feed and a God complex.

‘She’s a very, very tough, wonderful woman who has survived many tragedies and kept her strength,’ says Bassa. ‘To stand up to him and manage him was a heck of a job. He would always come out on top, but she was incredibly good at nurturing and protecting us.’

Bassa, meanwhile, was having a ball in South Africa. In their early 20s, he and a friend were making a fortune through a telemarketing business: ‘It was just gold. We were – making far too much money far too young, driving Ferraris, hanging around with the wrong people. It was like being in a movie.’

Until they heard that someone was being sent from Johannesburg to ‘take them out’.

That brought him to his senses — he met Donné, who became his wife, and bought a huge house on the coast, which he turned into an extraordinary hotel that he describes as ‘like a pimp’s palace’. 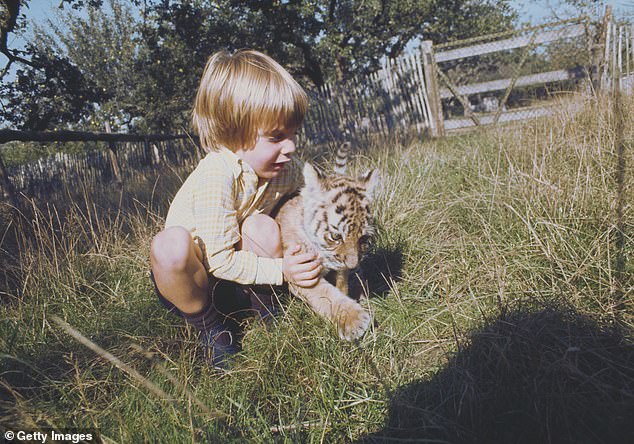 Bassa’s playmate was an elephant called Assam. He was cheered on at school sports days by his mother and two tiger cubs on leads.

It sounds bananas. Accessed via boat and across a nudist beach. Butlers wading fully clothed into the water to meet the guests.

For years, it was the hot destination for supermodels such as Kate Moss and Naomi Campbell, and rich businessmen who wanted to let their hair down.

While his father put him off working with animals for life, Bassa is quick to praise Damian and defends him in the wake of the Charity Commission’s investigation into serious concerns about the governance and financial management of the Aspinall Foundation, uncovered by this paper.

‘He’s done a fantastic job! It’s so petty. You think of all the good they do.’

But running the casinos ‘would have really suited me’, he says. ‘My natural instinct would have been to be in that world. But my father kept me away from it, so that’s that.’

He did, however, get the chance to even out the relationship with his father when, in the late Nineties, John became ill with cancer of the face and Sarah finally collapsed under the strain and called Bassa for help.

For the next 18 months, until his father’s death, he tended to John day and night, which he says was ‘the most special time of my life… a huge connection was formed’.

Bassa began painting in 2012. He couldn’t find the art he wanted for his office, so he bought canvas and expensive Italian acrylics, and painted one himself.

His style is not everyone’s cup of tea but he has commissions aplenty and now paints, enjoys life and shares his home with his noisy children.

The only animal in sight is a small dachshund called Hiccup.

‘Everything my parents did wrong, I try to rectify in my parenting,’ he says. ‘But it also made me who I am, so it can’t all be bad.’

So would he hand his six-month-old baby to an adult female gorilla?

He thinks for a minute.

‘Yes, I think I probably would! I think, like him, I would take the gamble. But it might be hard to persuade my wife.’