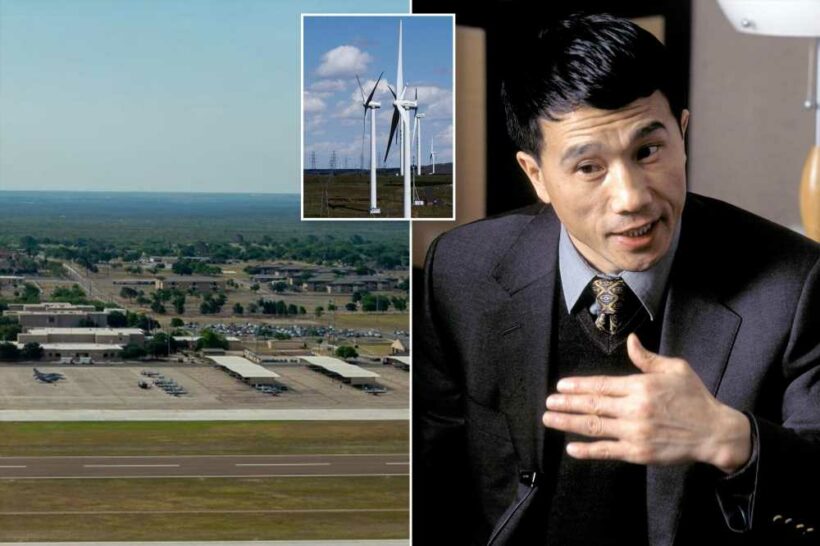 China bans karaoke with ‘illegal content’ — including the song ‘Fart’

Texas lawmakers are blocking a Chinese billionaire from setting up a wind farm near a US military base over fears it could be used to hack into the state’s power grid, according to reports.

The cost of the land, which is close to Laughlin Air Force Base, is estimated to be about $110 million, Forbes reports.

Under Sun’s plan, the farm could have fed into the state’s independently run electricity grid, the Electric Reliability Council of Texas (ERCOT).

His efforts, however, ignited a political firestorm after it emerged that Sun — who has a net worth of $2.1 billion — had links to the Chinese Communist Party.

The plans were subsequently thwarted in June when Texas Gov. Greg Abbott signed the Lone Star Infrastructure Protection Act, which prevents foreigners from “hostile nations” from accessing critical infrastructure like the Texas grid.

The law was a direct response to Sun’s wind farm plan, according to state Sen. Donna Campbell (R-San Antonio).

Critics of Sun’s plan had raised concerns that allowing a foreign company to connect to the Texas power grid could make it vulnerable to attacks — such as the recent hack of the Colonial Pipeline.

Texas is the only US state that relies on its own electrical grid. The grid collapsed briefly back in February when snowstorms struck the area.

The saga involving Sun first erupted in 2019 when local landowners and conservationists started raising concerns that the construction of Sun’s wind farm could harm the nearby Devils River.

Soon after, Sun’s ties to the Chinese Community Party emerged.

His company, GH America, previously hired military and government officials. He also has a personal relationship with authorities in China’s Xinjiang province and served in the People’s Liberation Army as a teenager.

“Initially, we tried to take the environmental angle, because we had these endangered species and because the Devils River Conservancy has largely been focused on the ecological components of the region,” Julie Lewey, executive director of the Conservancy, told Forbes.

“Unfortunately, that angle didn’t get a lot of traction … We started to roll out the narrative and really just spread awareness and understanding that this company from China was planning to connect to our critical infrastructure.

“We’re not xenophobic but we are concerned for our national security, as every red-blooded American is.”

Some Texas politicians seized on the China links and flagged the possibility that Sun’s wind farms could pose a national security threat.

US Sen. Ted Cruz (R-Texas) was among those opposed to the wind farm — especially given its proximity to the air base.

“These wind farms affect our training routes and pose a severe risk to our national security,” Cruz said.

“The Chinese Communist Party has demonstrated time and again they’re willing to invest billions of dollars to expand their espionage capabilities and their global reach, including through land purchase schemes near military bases.”

Despite the backlash, Sun says he now plans to lease his land to other companies so they can operate the wind farm.