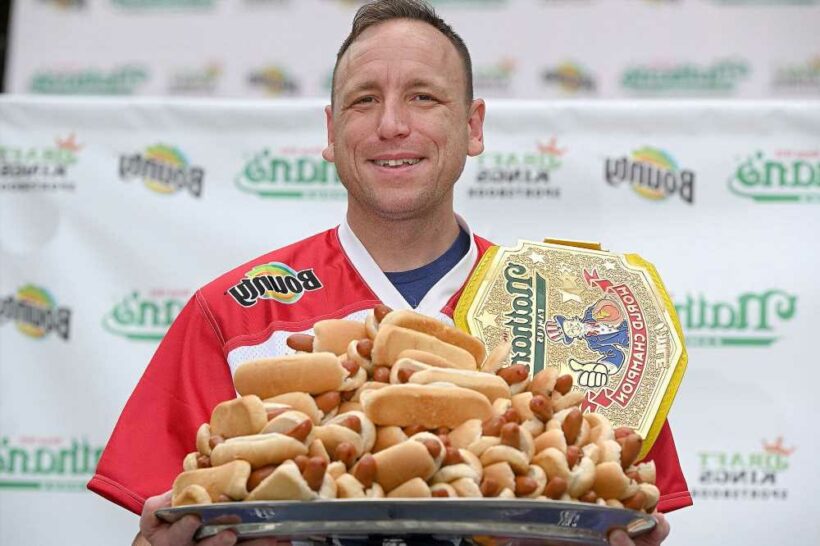 Nathan’s annual Fourth of July Hot Dog Eating Contest has special meaning for 13-time champion Joey Chestnut, who told The Post on Sunday he’s excited to compete in front of the public again.

The “boy king” of competitive eating set a new world record last year, gobbling 75 hot dogs and buns in 10 minutes — but did so without the usual audience and on the third floor of Nathan’s headquarters in Williamsburg.

“It’s been so long since we’ve been in front of a big crowd, just with COVID. So I’m excited and nervous,” the 37-year-old told The Post moments before his attempt Sunday to break his own record. “I love being in front of people and the energy it brings.”

Major League Eating’s top-ranked competitor said he was looking forward to returning to the contest’s traditional Coney Island location and “getting to eat in front of people, looking forward to the audience and hopefully just have a good time.”

“I’m just (trying to) stay happy, relaxed. No negative energy. And just be happy. Just think of all the good practices,” he said.

Chestnut won his first Nathan’s world championship in 2007, when he dethroned six-time defending champion Takeru Kobayashi. He has won the contest every year since — with the exception of 2015, which he lost to Matt Stonie.

The California native said he’s “hoping” to win it all again in 2021.

“I’m just hoping I can find a rhythm and do what I’ve been doing in practice,” he said. “As long as I do that —if I win, great. If I get a record? Awesome.”

“Somebody else pulls it out? Good for them, but they’re gonna have to really, really eat like a madman.”