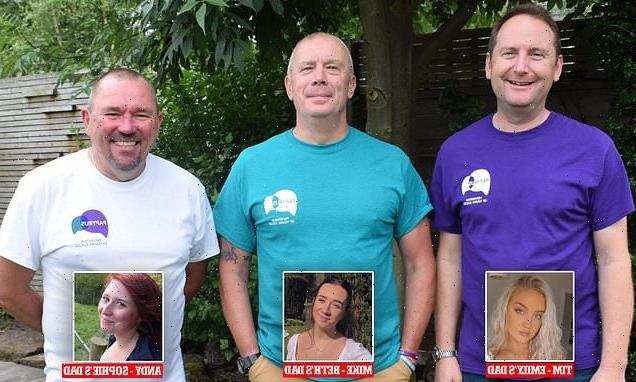 Three dads are walking 300 miles in memory of their daughters who took their own lives.

The trio hopes their ‘extraordinary journey’ will raise awareness for suicide prevention and spare other families the agony of losing a child.

While Tim Owen, Mike Palmer and Andy Airey have different stories to tell, they all end in tragedy. 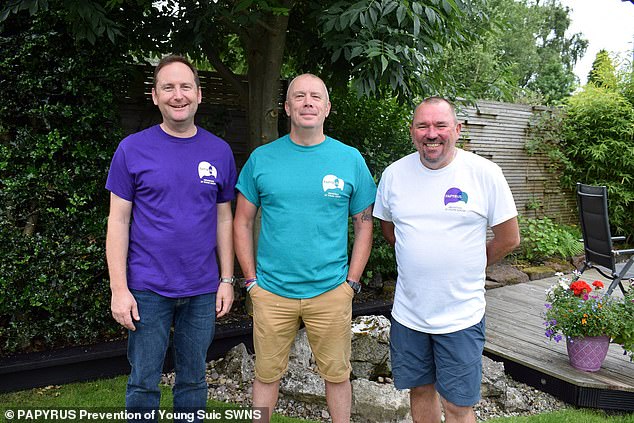 Dads Tim Owen (left), Mike Palmer (middle) and Andy Airey (right) are walking an average of 20 miles a day over 15 days in a bid to raise money for PAPYRUS Prevention of Young Suicide

Mr Palmer, a firefighter from South Manchester, lost his daughter Beth in March 2020. He believes her decision was partly driven by Covid and lockdown.

He said: ‘She hated the fact that she could not finish college with her friends and saw all her plans being cancelled one by one.’

The 17-year-old had released a music single called Pixel Screens, which topped the charts soon after her death and is available on all major streaming platforms. 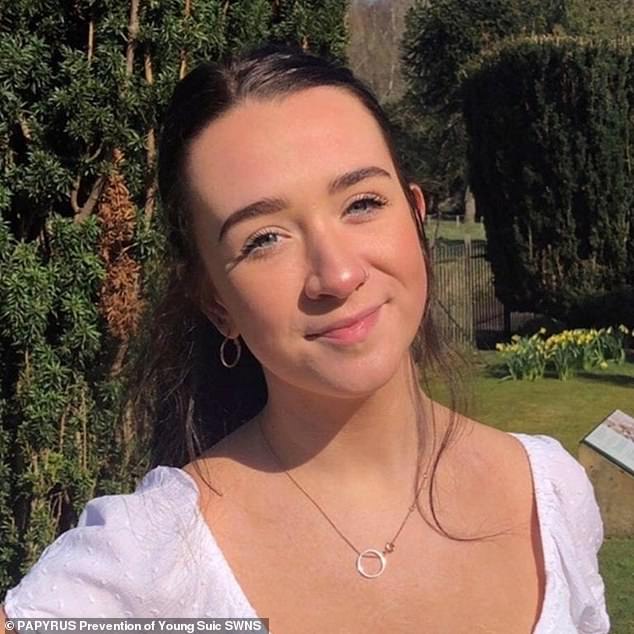 Beth Palmer (pictured) took her own life aged 17 in March 2020. A budding performer, singer and dancer, Miss Palmer had a ‘vast friendship group’ and active social life – but she was thrown into a tailspin when lockdown began in March 2020 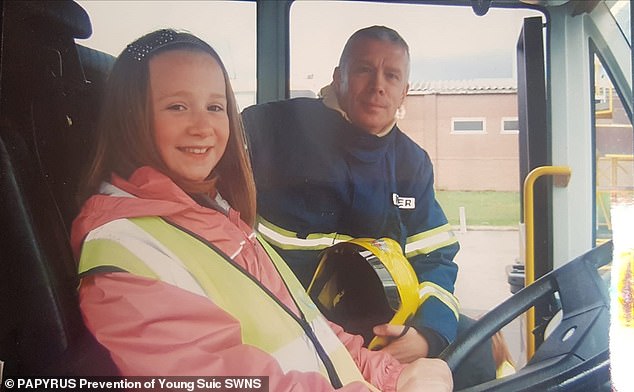 Mr Palmer with Beth (pictured) when she was a child. The bereaved dad said ‘that terrible word ‘suicide’ and Beth never belong in the same sentence’

Mr Palmer said: ‘3 Dads Walking is not a club I want to belong to, but along with Andy and Tim it gives us, as fathers, an opportunity to fight back and maybe make a difference.

‘We are all too aware that there are more young people out there falling into despair and see no way out other than to end their own precious lives.

‘We hope that by linking our three homes and telling our three daughters’ very different stories we will put a spotlight on young mental health and ultimately the brutal effects of suicide.’

Mr Owen’s daughter Emily also passed away in March 2020 after trying to take her own life five days earlier. 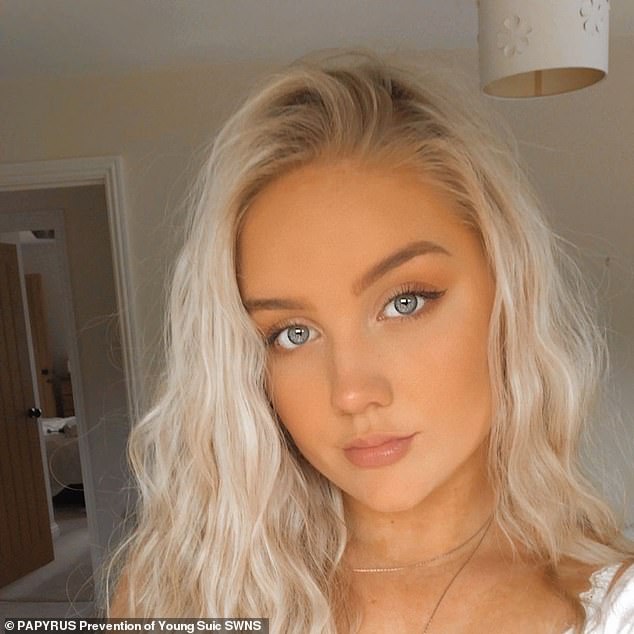 Emily Owen (pictured), aged 19 when she died, ‘lived life at a million miles an hour, a free-spirit with no limits, charging around in her beloved Mini and travelling to Cornwall as often as possible’ 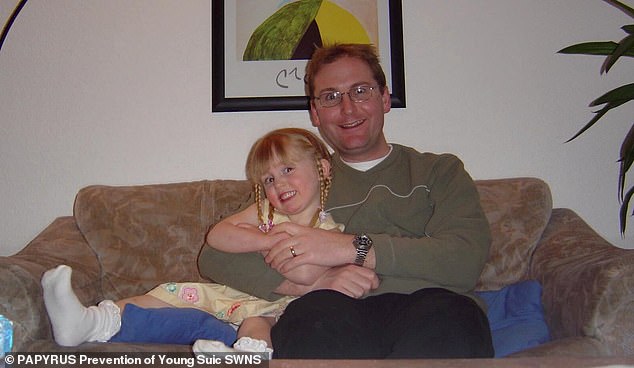 Mr Owen (pictured with daughter Emily as a child) described her as ‘the life and soul of an event and our house’. She took her life in March 2020, unable to cope with life under lockdown, according to her dad

The 19-year-old, who had been diagnosed with autism late in life, was equally struggling to cope with ‘life under lockdown’, he believes.

Mr Owen said: ‘I strongly believe that in a moment of darkness my daughter made a wrong decision.

‘Two minutes earlier or later it would have been different.

‘Had she just taken time to think or to speak to someone, her decision and my family’s lives would be on another path.

‘Instead she decided she could no longer go on, leaving behind a devastating ripple effect on her family and friends.

‘She just had no idea how many lives she touched and continues to impact.’

Mr Airey’s daughter Sophie took her own life on 19 December 2018, shortly after separating from her husband Sam. 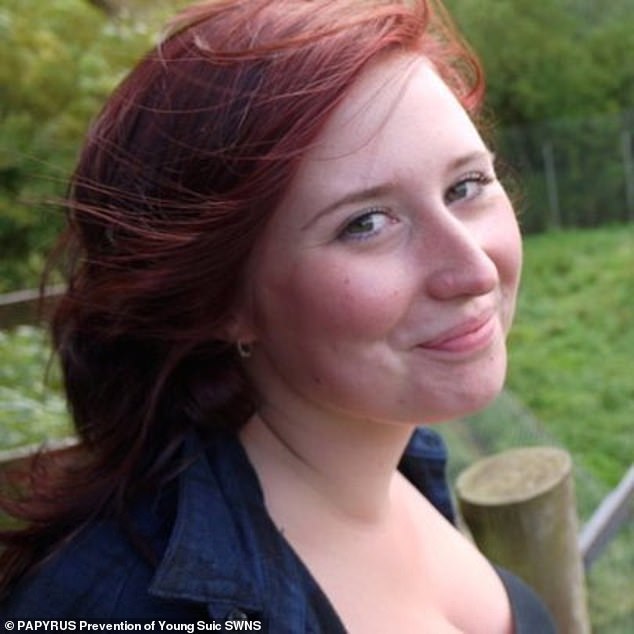 Sophie Airey (pictured) lost her life to suicide aged 29. The young oncology nurse took her life on 19 December 2018 after splitting up with her husband 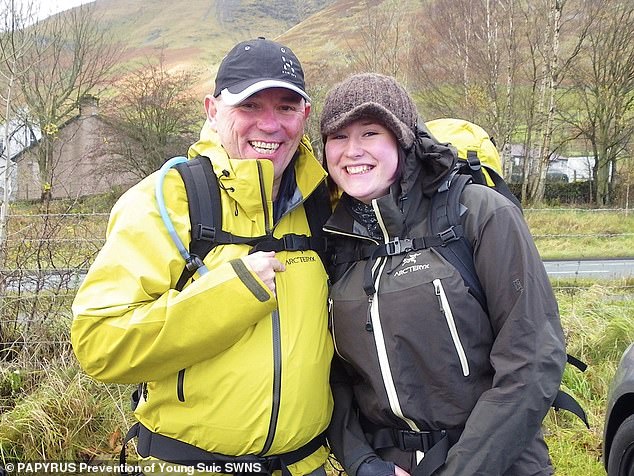 The 29-year-old was due to return home a day later for the festive season and had taken a lease on a ‘lovely apartment’, having been offered a new position at work, which she seemed ‘excited about’, according to her father.

Mr Airey said: ‘Suicide is the biggest killer of young people under the age of 35 in the UK.

‘We only learned this terrifying fact because each of us has lost a daughter to suicide within the last three years.

‘By raising awareness, we hope to prevent other families from suffering such indescribable pain and bring something positive out of the utter devastation of losing a child to suicide.’

The trio have set off on from Mr Airey’s house in Cumbria before heading South through South Lakeland and Lancashire to Mr Palmer’s home in Greater Manchester.

Next, they will turn south east, through Cheshire, Staffordshire, Derbyshire, Nottinghamshire and Lincolnshire, arriving at Tim’s family home in King’s Lynn.

The dads hope to complete their challenge in 15 days, finishing their journey on Saturday 23 October.

Their trek is in support of the national charity PAPYRUS Prevention of Young Suicide, which believes many young suicides can be prevented.

The charity’s chief executive Ged Flynn said: ‘Andy, Mike and Tim were leading different lives in different parts of the country and would probably never have met had they not been brought together by the tragedy and trauma of suicide which has shattered their lives and the lives of those around them.

‘As 3 Dads Walking they will be able to channel their energy and focus on what they can do to help save young lives.

‘It is remarkable that these proud fathers, who are each trying to deal with their own grief in their own way, have found a positive path forward together.’