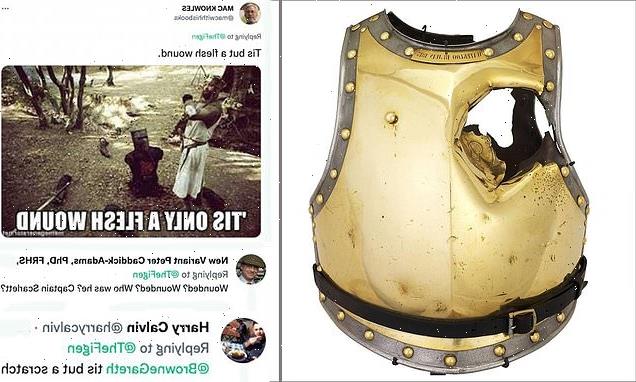 ‘Tis but a scratch! Smashed armour worn by French soldier blasted by a cannonball during Battle of Waterloo becomes online hit after video is mocked for saying its wearer was merely ‘wounded’

Smashed armour worn by a French soldier blasted by a cannonball during the Battle of Waterloo has become an online hit after video of it was mocked for saying its wearer was merely ‘wounded’.

Social media users poked fun at the idea the young soldier was only ‘wounded’ by the canonball, comparing Fauveau to Monty Python’s Black Knight with lines from the film that the soldier had only a ‘flesh wound’ from the canonball and ”tis but a scratch!’

The armour, worn by 23-year-old Antoine Fauveau, has a large canonball entry wound on the soldier’s right chest and an exit wound at the back from a blow that would have killed him immediately.

The breastplate, now displayed at the Musee de l’Armee in Paris, was likely hit by a 9lb cannon ball probably fired by the Royal Horse Artillery during the Battle of Waterloo, according to history Professor Tony Pollard.

He said the armour, also known as a cuirass, was pulled off Fauveau’s as a prized possession before the conscripted French cavalryman was pitched into a mass, unmarked grave. 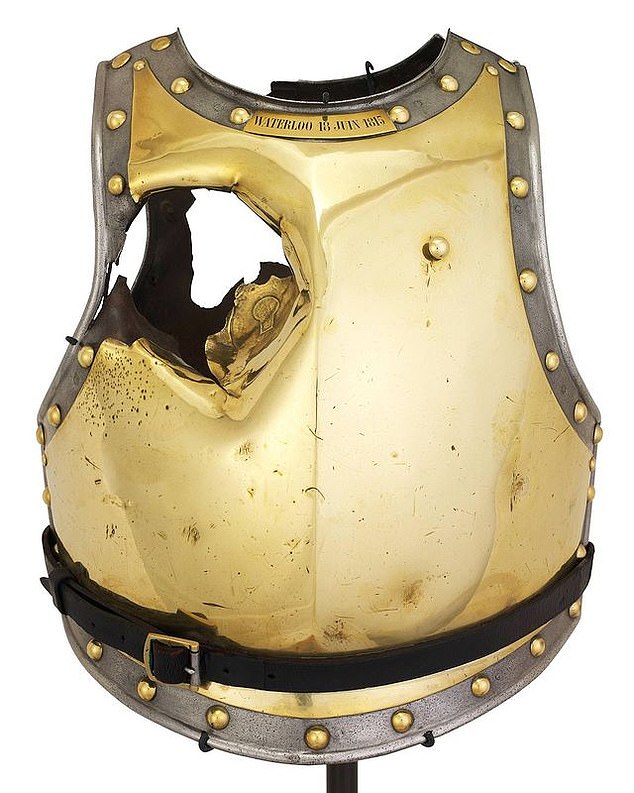 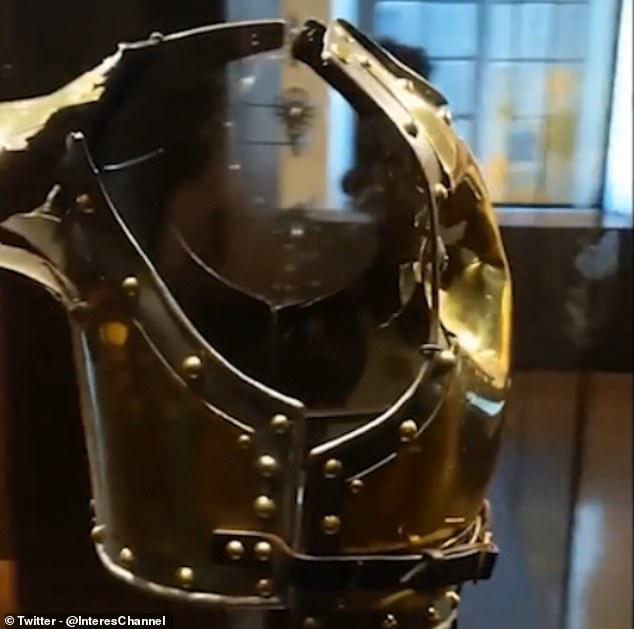 The armour, which is displayed at the Musee de l’Armee in Paris, has a large canonball entry wound on the soldier’s chest and an exit wound at the back 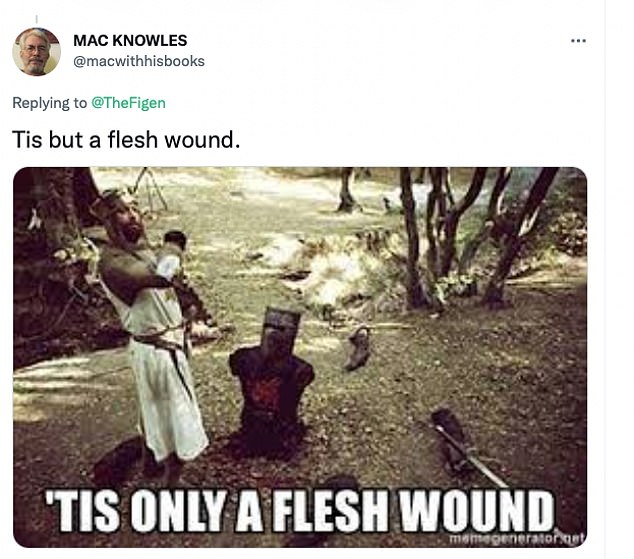 Professor of Conflict History and Archaeology at the University of Glasgow Tony Pollard weighed in on the debate, lamenting social media users making light of ‘brave’ Fauveau’s death..

‘It is not a joke or a Monty Python sketch about a scratch. It might not seem so funny if we knew more about the man and his death,’ he wrote.

He also added context to Fauveau’s death, saying that cannon balls ‘ideally’ hit the floor, bounced and then hit the soldier but the ground at Waterloo was softened by rain meaning he was instead hit ‘direct’.

He said the shot hit Fauveau’s right breast causing ‘massive trauma’ that ‘destroyed every organ’ and resulted in instant death – but that his torso would have been held together by the armour.

The young soldier was a new cavalryman conscript to the French army’s 4th company, 2nd Carabinier Regiment who would have had ‘no more than seven days training’ before his death on the battlefield.

Mr Pollard said the young soldier likely died during a series of cavalry charges, described as ‘more of a slog up a muddy hill than a gallop’ because of the mud, against the Duke of Wellington’s centre and right lines on June 16. 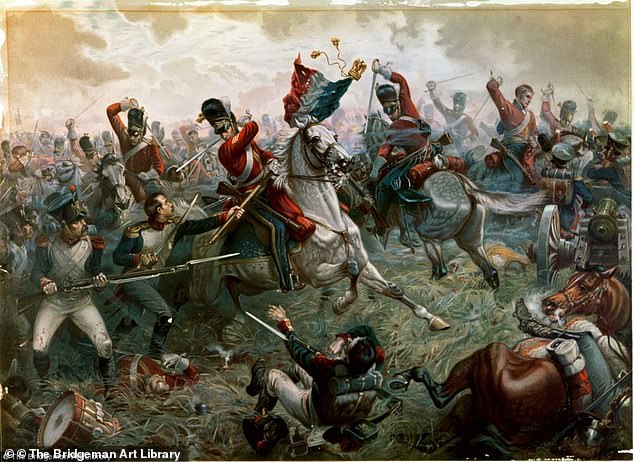 Mr Pollard said the young soldier likely died during a series of cavalry charges, described as ‘more of a slog up a muddy hill than a gallop’ because of the mud, against the Duke of Wellington’s centre and right lines on June 16 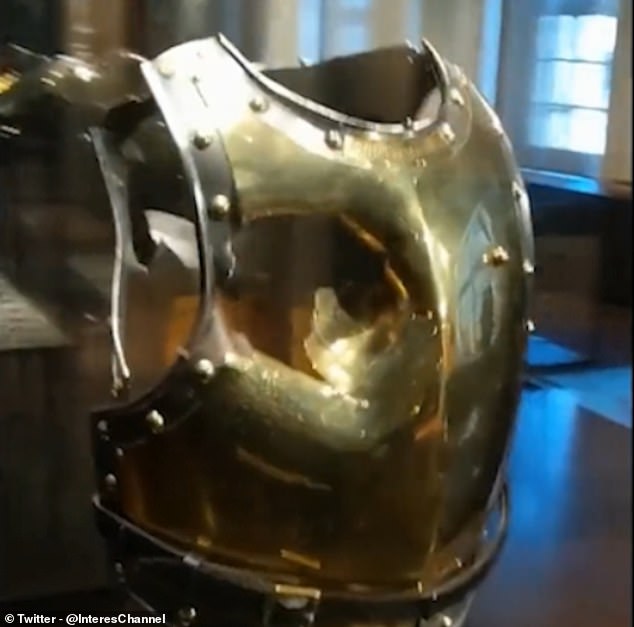 The metal breastplate, worn by 23-year-old Antoine Fauveau, was ruptured by a canonball during fighting in a blow that would have killed him immediately

The 1st and 2nd Carabinier regiments were ordered forward from the east edge of Hougoumont at around 6:30pm and were met by a barrage of ‘muskets and cannon’ in which Favreau was likely killed, he said.

He added the breastplate was a ‘prized trophy’ that was recovered before Fauveau’s body was buried in a mass, unmarked grave.

And in a surprising turn of events for the era a pay book found lodged in the breastplate’s padding allowing officials to identify Fauveau.

The book gave his personal details as ‘long, freckled face with a large forehead, blue eyes, hooked nose & a small mouth’ and revealed he was a dairyman who was due to get married.

WHAT WAS THE BATTLE OF WATERLOO?

In 1808 Napoleon had invaded Spain and Canning and dispatched one of his army commanders from India, Arthur Wellesley, to ensure his forces crossed the Iberian peninsula from Portugal.

A four year campaign saw him etch his name in the history books and not withdraw from Spain until 1812.

He then attempted to quell the Russians before retreating from Moscow following defeat at the Battle of Borodino in 1814.

Napoleon returned to Paris and the French Emperor was sentenced to exile in and considered a national disgrace.

He escaped his exile in Elba and headed back to his homeland. he was confronted with a hastily assembled by Wellesley, who had now become the Duke of Wellington. 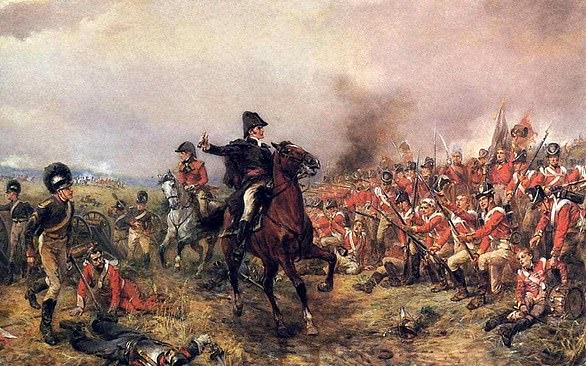 The Duke of Wellington (pictured, at the Battle of Waterloo) himself said it was ‘the nearest run thing you ever saw in your life’

On June 15 1815 a ball in Brussels announced the arrival of the French Army.

The two opposing generals, both 46, met on the battlefield at Quatre Bas and Waterloo two days later.

Both forces had 70,000 men approximately but the allies had an additional 48,00 Prussians.

It was to be the belated arrival of these reinforcements that would sway the battle.

Wellington himself said it was ‘the nearest run thing you ever saw in your life’.

The Imperial guard fell, Napoleon fled and his carriage captured by the Prussians. They went on to incorporate his diamonds in to their crown jewels.

It was to be the final nail in the coffin of Napoleon and he later wrote the the then English monarch George III saying ‘I have terminated my political career’.

he hoped to flee to America but was sent to exile in St Helena where he spent his remaining six years before his death in 1821.

His downfall signalled the end of the hundred years war between the English and the French.