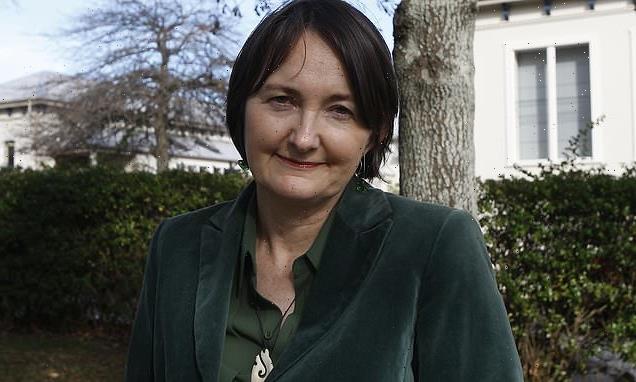 Brady, an expert on China’s attempts to exert political influence around the world and an outspoken critic of the CCP, said two of her tweets were temporarily marked ‘unavailable’ by Twitter.

She said her account was also temporarily restricted over the weekend, before being restored on Monday. Twitter did not say what prompted its actions.

Edward Lucas, a columnist for The Times newspaper, wrote that it probably resulted from an online campaign of complaints by Communist Party agents which would have triggered an automatic response from Twitter while it investigated.

‘After I had stoked a furor on Twitter and sent umpteen complaints, her account was restored,’ Lucas wrote. ‘Less prominent victims of Chinese censorship would have scantier chances of redress.’ 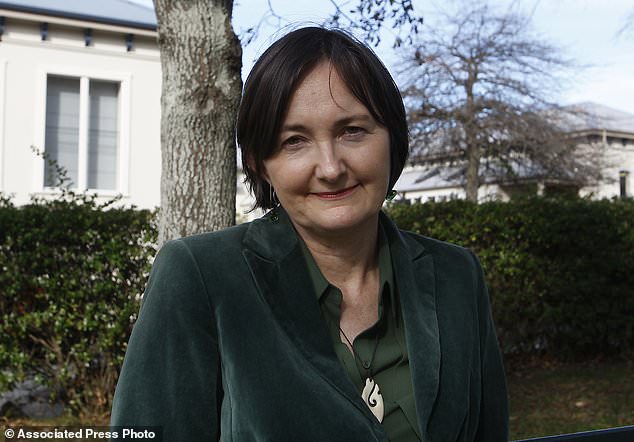 Brady tweeted her thanks to Lucas, saying that she’d been unable to get a reply from Twitter herself.

In a statement, Twitter said that when it detects unusual activity from an account, it can sometimes add temporary notices until it gets confirmation from the account owner.

‘To set the record straight, the assertion that Twitter is in coordination with any government to suppress speech has no basis in fact whatsoever,’ Twitter said.

‘We advocate for a free, global and open internet and remain a staunch defender of freedom of expression.’

Brady’s tweets made fun of the lack of international validation of the centenary. Russian President Vladimir Putin was among the few leaders who sent congratulations to China.

In one tweet, Brady suggested an alternative headline for a news article about the celebrations: ‘Xi: its my Party and I’ll cry if I want to,’ she wrote.

Brady said her account has been restored. ‘Opening my work laptop this morning I was greeted by a ‘Welcome back’ message on my screen from @Twitter, as if I was the one who left them,’ she wrote.

She wrote that Twitter, Facebook, LinkedIn, Zoom and other big players in social media appeared to be getting into the habit of silencing Communist Party critics.

In 2017, Brady wrote a groundbreaking paper ‘Magic Weapons’ which detailed what she said were the Communist Party’s efforts to exert political influence in New Zealand.

Subsequent burglaries and break-ins at her home and office remain unsolved.

The Chinese Embassy in Wellington did not immediately respond to an Associated Press request for comment.

The Chinese government has not commented on any action online against Brady and has heatedly denied accusations that it interferes with foreign media and political systems.

However, under Xi, who is also leader of the Chinese Communist Party, the government has taken an increasingly combative approach toward its critics, whether individuals, organisations or foreign governments. 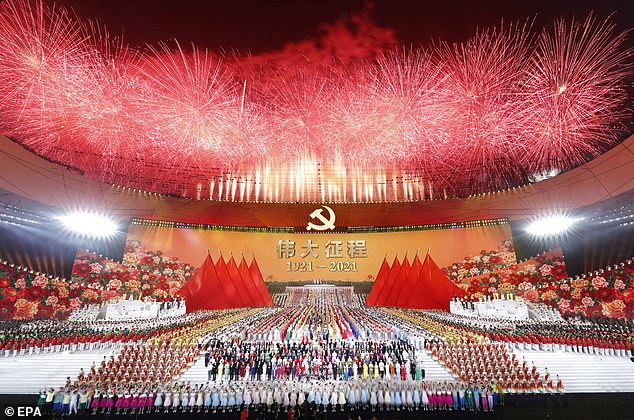 Brady’s tweets made fun of the lack of international validation of the CCP centenary. Russian President Vladimir Putin was among the few leaders who sent congratulations to China. Pictured: Celebrations in Beijing 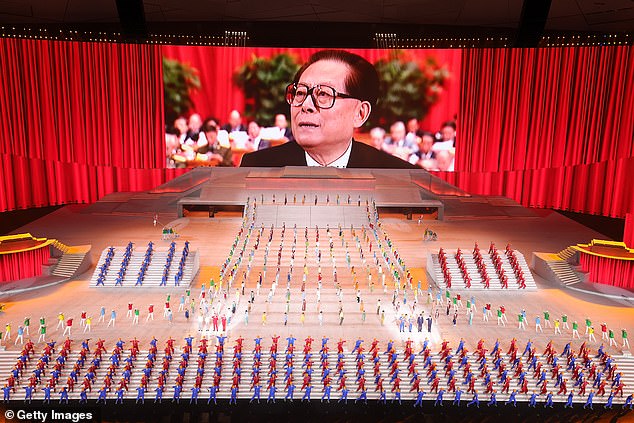 Spectacular event: A large screen showing communist leader Jiang Zemin during the art performance celebrating the 100th anniversary of the Founding of the Communist Party of China which took place in Beijing, China, today ahead of anniversary