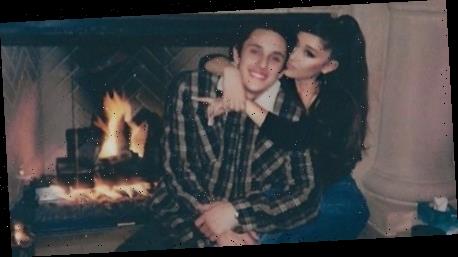 All from her point of view! Ariana Grande has managed to keep much of her relationship with Dalton Gomez out of the spotlight, but she has shared some insight into their private life through her music and Instagram.

The couple were first spotted together in February 2020 while dining with friends at Bar Louie in the Northridge neighborhood of Los Angeles. The following month, a source told Us Weekly that the Grammy winner and the real estate agent were officially dating. She did not confirm the news, however, until May 2020, when the lovebirds slow danced in Grande and Justin Bieber’s “Stuck With U” music video.

The “34+35” singer started sharing photos with Gomez via Instagram later in the year and detailed their romance in several songs on her sixth studio album, Positions, including “Love Language” and “Obvious.”

“Ariana sees something different in Dalton that she has never seen before in guys she has previously dated,” a source exclusively told Us in August 2020. “He is the type of guy she has been looking for. He’s very protective of her, will go out of his way for her and does little things that are chivalrous. Dalton will go above and beyond to meet her needs.”

The insider revealed that the pair met after Grande’s team hired the Aaron Kirman Group employee to help her find a house to buy before the COVID-19 pandemic.

“When she saw him, she immediately thought he was cute and very good-looking, and she asked her team to set up an in-person meeting with him,” the source told Us. “Ariana fell very hard for Dalton shortly after they met.”

Grande announced their engagement in December 2020, sharing a photo on Instagram of her diamond and pearl engagement ring, writing, “Forever n then some.”

The pop star previously dated rapper Big Sean from 2014 to 2015, her backup dancer Ricky Alvarez from 2015 to 2016 and the late Mac Miller from 2016 to 2018. She was engaged to Saturday Night Live star Pete Davidson for four months in the summer of 2018 and later sparked romance rumors with Social House member Mikey Foster.

Scroll down to see a timeline of Grande and Gomez’s relationship!