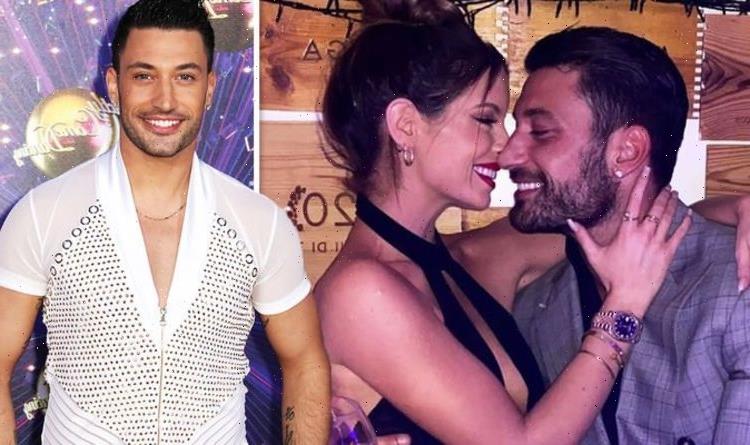 Strictly Come Dancing star Giovanni Pernice has taken to Instagram to confirm his romance with former Love Island contestant Maura Higgins. The dance pro, 30, posted a steamy picture of him and the Irish beauty, 30, in an intimate embrace, following swirling rumours of their blossoming romance after the two were seen kissing just days ago.

In view of his 454,000 followers, the Strictly dancer posted a sweet snap with his new love.

Looking smart in a checked grey blazer, the ballroom dancing star smiled as he held his new partner around the waist.

Going in for a kiss, Maura wore her hair in a messy top knot, which she paired with red lipstick, simple gold hoops and a revealing black top as she affectionately caressed the Italian native.

Confirming his new romance, Giovanni captioned the snap: “You’re mine.”

Maura also posted a picture of her and her new beau canoodling in front of a stunning sunset for her 3.2 million followers to see.

Days ago it was reported that the duo were thought to be in the early stages of a relationship after the reality star was spotted kissing her new beau good luck ahead of his performance in show Him & Me.

The source told the MailOnline: “Giovanni was so thrilled that Maura was in the audience for his opening night – and she loved seeing him in action.

“Although Giovanni is working it’s been like a mini-break for them, they’re staying at Blackpool’s The Big Blue Hotel, which has been a fun experience.”

Two months ago Maura took to social media to announce that her and her Love Island boyfriend Chris Taylor had split.

Following months of speculation that the pair were dating, the Irish beauty confirmed their relationship in November 2020.

In a statement, Maura wrote: “It breaks my heart to even type this, but I wanted to let everyone know that myself and Chris have made the joint decision to end our relationship.”

She went on to say that her and Chris “work better being friends” before wishing her former beau “nothing but the best”.

Prior to dating Chris, Maura had a seven-month relationship with Love Island co-star Curtis Pritchard after meeting on the ITV2 show in 2020.

The American singer confirmed her blossoming relationship in January 2019 having met Giovanni on the BBC dance show.

However, after a year of dating, the Italian dancer took to Twitter to announce that he and Ashley had decided to go their separate ways.

He tweeted: “@ImAshleyRoberts and I have made the decision to separate as a couple. We remain friends and wish each other well for the future.”

Prior to dating Ashley, Giovanni was linked to Strictly’s Luba Mushtuk after the Russian native shared a snap of themselves dancing and branding her co-star “my man.”

However, the romance was quickly denied by both parties.