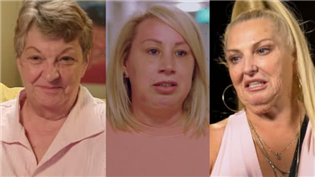 90 Day Fiance fans and viewers are all too familiar with Angela Deem’s bad behavior.

For years, some have speculated that she merely acts like some sort of feral caricature for the sake of the cameras.

That has never really held up, and Angela’s once-loyal friend JoJo is living proof.

They two had a serious falling out, and JoJo explains how the reality TV villain turned on her in an instant.

We all remember JoJo from Angela Deem’s on-screen adventures.

When Angela’s own family wouldn’t come and witness her wedding to Michael Ilesanmi, JoJo was there.

She hopped onto a plane and flew out just to be there for Angela and Michael’s nuptials.

When Angela underwent her series of surgeries, JoJo was there again.

She traveled with Angela across the country — during a pandemic, no less.

When many of us were skipping out on holidays with family, JoJo was helping Angela stand up and eat.

JoJo went above and beyond for Angela, and it wasn’t just tending to her.

She also tended to her marriage.

JoJo kept Michael up to date on Angela’s surgery and recovery.

To say that JoJo looked poised to win at least one Friend Of The Year award is an understatement.

While we never saw Angela show real appreciation or repay JoJo for her kindness, surely she was appreciative and returned that loyalty?

While there, she met up with Debbie Johnson — a 90 Day Fiance legend currently starring on 90 Day: The Single Life.

Angela even shared photos of herself and her new body visiting Vegas in July.

However, it was clear that something happened behind the scenes, as JoJo “parted ways with the bestie.”

Last month, someone asked Debbie if she and Angela were friends now.

She replied by saying that she isn’t friends with people “who treat their friends like s–t.”

Fast forward to just a week ago, and JoJo posted to Instagram.

“Obviously I have an admirer! You all know who it is!” she captioned.

The photo read: “Trust me, no one is jealous of you! Fact! If there is something you want to tell me, go ahead!”

It was clearly obvious that JoJo was referring to a falling out with Angela.

Debbie replied, signaling that she understood the nature of the hostility too.

“Apparently she is more jealous of you,” she commented.

“She has shown her true colors and you have always remained true to you,” Debbie wrote.

“Love you Jojo,” she expressed.

Debbie assured JoJo: “She screwed up when she lost you as a friend.”

Considering how Angela treats her castmates, her husband’s family, and her actual husband, it’s no surprise to hear that she treats her friends “like s–t.”

But what exactly happened between Angela and JoJo and why does Debbie appear to be in the middle of it?

Finally, JoJo has taken to Instagram Live to explain.

Apparently, it all started when someone asked JoJo how she knew Debbie.

JoJo’s response, noting that everyone knows her through the show and her own connection to Angela, enraged the reality TV villain.

“She turns around and starts yelling, ‘You lying bitch, you would’ve never met Debbie if it wasn’t [because] of me, bitch,'” JoJo described.

“And she told me I was irrelevant. She cussed me out in front of everybody. That’s what happened,” JoJo recalled.

“And then she pulled some crap that was even worse … and because of her telling me what she told me, I will never speak to her again,” she vowed.

Apparently Angela also kicked her out of their shared hotel room in Vegas and called her to deliver more verbal abuse.

Perhaps there is a lesson to be found in all of this: don’t be friends with monsters.

It’s not JoJo’s fault that Angela treated her this way, because it was Angela’s choice to be who and what she is.

We hope that JoJo makes better friends who will return her loyalty and good intentions. Angela seems to care only about herself.