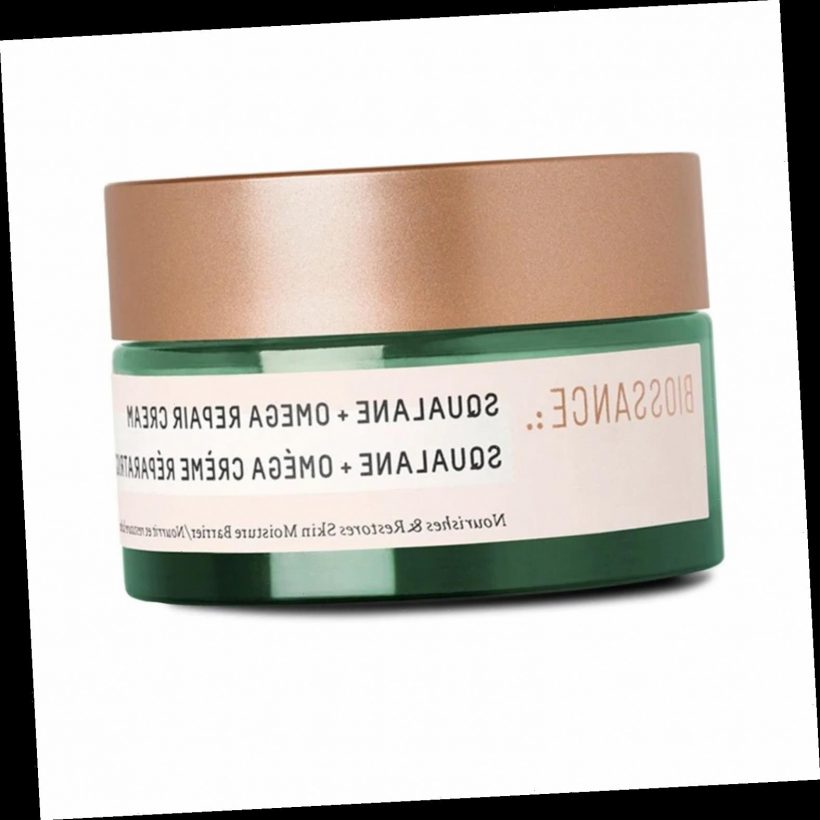 Given how uniquely reactive each person's skin is, there are two ways to go about finding a skincare brand that won't do you wrong. You can scout out the upper echelon of top-rated products on Amazon (effective, but time-consuming), or you can shop brands that have such high ingredient standards, every product earns reviews that are as glowing as they leave shoppers' skin. Such is the case for Biossance, and specifically the brand's Squalane + Omega Repair Cream — which happens to be included in the brand's current 25 percent-off spring sale.

If you're not familiar with the brand, it's built around one star ingredient: squalane. Vowels are important when it comes to distinguishing the brand's sugarcane-derived substance from squalene with an "e," which is a natural moisturizer that our bodies produce, but which decreases as we age. For years, the brand says that skincare companies relied on squalene from shark livers to moisturize — bleh, and cheers to innovation.

Said squalane innovation features front and center in the cream's formula, along with hydrating lipids (i.e. good fats) to support the skin's natural moisture barrier, plump up lines, and soften rough texture. The proof is in the pudding, according to almost 700 five-star reviews for the cream on Biossance's website. Seven pages of shoppers' raves come up when you search the reviews for the cream's effect on fine lines, and those in the 55+ age bracket write that they're stunned at its performance. "I am in disbelief at how these products have worked on my skin," one shares. "My frown lines are pretty much GONE." Another person in their 30s writes that after giving prestige brands like La Prairie and SK-II a shot, the Squalane + Omega Repair Cream "dramatically" softened their fine lines and got rid of redness that had plagued them since childhood. To that end, a different shopper says they "wake up with skin that feels the same as it did when I woke up at age seven" — the only kind of age regression we're interested in.

"I actually see fewer fine lines, and to top it off, the other day at the gym with no makeup on, one of my long-time friends told me I look amazing and YOUNGER!!!," another shopper adds.

Beyond its anti-aging effects, shoppers write that the cream makes skin that's Sahara-dry and flaking feel supremely soft for the first time, ever. It "feels like a cloud going on," and smoothes out traumatic acne scarring so well that shoppers say they're "so much happier and more comfortable." Another person who over-exfoliated and found themselves with "textured, extremely dry, ashy skin" says the cream began healing their skin after one use. One more shopper who saw smoother skin within a week deemed it their "holy grail night cream."

It makes sense: In the brand's clinical trials, 100 percent of users saw improvement in skin hydration with the cream, and 97 percent saw improvement in visible lines and wrinkles. Shoppers also mention the brand's Environmental Working Group certification drew them in, a sign-off that ensures the products are entirely free of ingredients with health, ecotoxicity, and contamination concerns (and it's no lip service — the organization's "unacceptable" list spans 1082 pages).

Healthcare workers are especially appreciative. One says that 12-hour days in a mask, shield, and eye protection had done a number on their skin, until they tried the Repair Cream. "It truly does wonders," they wrote, adding that it eliminated acne, redness, and dry patches. Going a step further, five pages of reviews mention that when used in conjunction with the brand's vitamin C rose oil, the cream makes shoppers' skin look tight, supple, bright, and dewy. In one last shopper's words, "both products plump my skin and basically erase any lines or texture."

Get the Biossance Squalane + Omega Repair Cream for $43.50, and the Squalane + Vitamin C Rose Oil for $54 on Biossance's website. They revert back to $58 and $72 when the sale ends on March 28, so jump on them while you can.