Despite having a girl back home, Gus Smyrnios finds himself in somewhat of a love triangle with two OTHER women in this EXCLUSIVE ‘Floribama Shore’ sneak peek.

Gus Smyrnios finds himself in a tight spot on the Nov. 18 episode of Floribama Shore! The episode continues with the group’s Yardigras party, which Kirk Medas’ friends are visiting for. Two of those friends are women named Tori — one blonde and one brunette, and both with a crush on Gus. In an EXCLUSIVE preview for this week’s episode, Gus finds himself caught in the middle of both women.

At first, he’s chatting up blonde Tori, and they bond over doing “reckless s***” in their pasts. However, he eventually goes outside, where he’s joined by brunette Tori, and the flirtation level gets taken to a new level. While watching from inside, blonde Tori admits that she’s “annoyed”. “I think he’s cute and he’s out there with other Tori,” she complains. 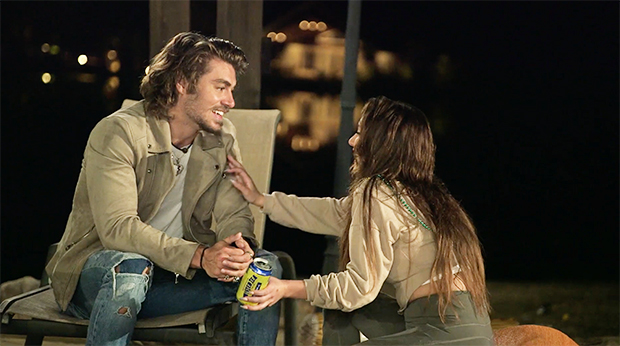 While sharing a few drinks, Gus and brunette Tori have a heart-to-heart outside. However, it’s during that conversation that he lets her know that he’s sort of seeing someone back home. “You’re a super good chick, I can already tell that,” he admits. “I am kind of talking to somebody back home and I’m trying to be good. But we’re still going to have a good time and have a lot more drinks! That’s all I know how to do.” Luckily, Tori understands, and agrees that they should just have fun.

“It’s hard for me to step back and realize I don’t want to overstep any boundaries,” Gus says in a confessional. “I don’t want to be disrespectful to someone I’m talking to back home. My biggest vice has always been women. I just love affection. I’m the worst. I’m terrible. I hate myself for it.”

Once Gus goes back inside, Kirk warns him that Tori is “mad as f***.” Then, she pulls him aside and lets him know she wants to talk to him. “There’s not many times where I can sit here and say I really didn’t do anything, but this time I honestly really didn’t do anything!” Gus explains. “It seems like there’s a full Tori Tornado in the house right now and I don’t know how to get out of the winds of this thing.”

Earlier this season, Gus revealed that he was talking to a girl named Samantha at home. In early November, months after this episode was filmed, he posted photos with Samantha on Instagram, so things appear to be going well for them. Hopefully seeing this Tori situation play out won’t take a toll! Floribama Shore airs Thursdays at 8:00 p.m. on MTV.