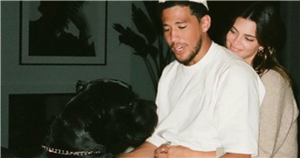 Kendall Jennerhas graced runways across the world due to her successful modelling career, and the Keeping Up With The Kardashians star’s love life has been just as attention-grabbing.

The stunning 26 year old is currently in a relationship with Phoenix Suns basketball player Devin Booker, 25, who recently celebrated her birthday with a gushing Instagram post.

But what do we know about their relationship and love story? Let’s take a look…

Kendall and Devin were first rumoured to be dating after they were pictured getting close during a trip to Malibu Beach just over a year ago.

It is believed Devin previously dated Kendall’s sister Kylie’s former BFF Jordyn Woods, who she infamously fell out with after the Tristan Thompson cheating scandal.

Kendall, who previously dated Harry Styles and ASAP Rocky, has never featured her romance on any of the Kardashian reality channels.

While her sisters often discuss their love lives in detail, Kendall likes to keep hers a little more private.

She reasons that she wouldn’t want to risk being with someone whose ulterior motive is to raise their own profile.

While the reality star just celebrated one year with her current boyfriend, he managed to stay entirely out of the family's reality show before it ended for good earlier this year.

It’s been reported that Kendall ‘appreciates’ Devin’s mutual desire to keep their relationship to themselves.

A source shared in April: "Devin is quiet and not interested in being in the spotlight or a celebrity… She really appreciates that about him and is attracted to that."

Devin captioned a photo of the reality star saying, "Most beautiful woman” accompanied by crown emojis.

The model has occasionally discussed their relationship, and previously spoke about his special bond with her sister Kylie Jenner’s three-year-old daughter Stormi.

As Kendall put it, "Him and Stormi have an amazing relationship. She has the biggest crush on him, and I'm jealous sometimes."

The TV star also regularly goes to watch her boyfriend play basketball where he isn’t shy in kissing his proud girlfriend as she watches from the stands.

When he turned 25 last month, Kendall shared a photo and referred to her partner as her ‘best friend’ which many regard as a major milestone for the couple.

According to a source, Kendall is willing to post about Devin now that she feels "very secure and confident in their relationship," adding: "She didn't expect this, but it's become the healthiest and best relationship she has ever been in. She definitely feels like this is different and more serious."