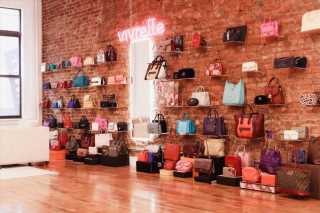 Luxury accessories membership club Vivrelle is plotting a significant expansion with a Series A funding round of $26 million.

Founded in 2018 by husband-wife team Wayne and Blake Geffen, the company — which says it has thousands of users and a lengthy wait list but declined to specify further — said the investment will allow it to scale and add more members. The investment was led by Origin Ventures with participation from the Chapford Capital Group.

Virvrelle allows users to pay between $99 and $279 a month to borrow luxury bags and fine jewelry from brands including Chanel, Hermès and Chopard. Its owners say the company has grown by triple digits in the last year.

The Geffens said that a Vivrelle member who works for Origin Ventures first reached out to them and asked if they were considering investment. Hence, a deal was born.

Said Wayne: “First and foremost we want to meet current and growing demand. What’s super exciting for us is how much demand we have and that we get to expand that on all fronts.”

Because most of Vivrelle’s traction has come organically so far, the company has only made small marketing pushes. But this investment will also allow the company to grow its brand recognition.

Wayne said he and Blake often describe their company as a hybrid between “Bergdorf Goodman and Soho House. We have the product of Bergdorf’s and the membership perks of Soho House.” Membership perks include discounts with certain luxury hotels, private jet companies and clothing brands.

During the pandemic the company has grown its user base and also recognized some shifts in behavior. “It’s an interesting thing to see. Our members might not be going to weddings anymore so clutches and diamonds are not borrowed as much. But they are going to the grocery store and everyday places so the items were shifting — it was more totes and everyday bags,” said Blake.

Vivrelle declined to disclose where it sources its merchandise from but did note that it does not do so directly from brands. The company currently has 10 employees, a workforce that it also plans to grow by triple digits in the next year.