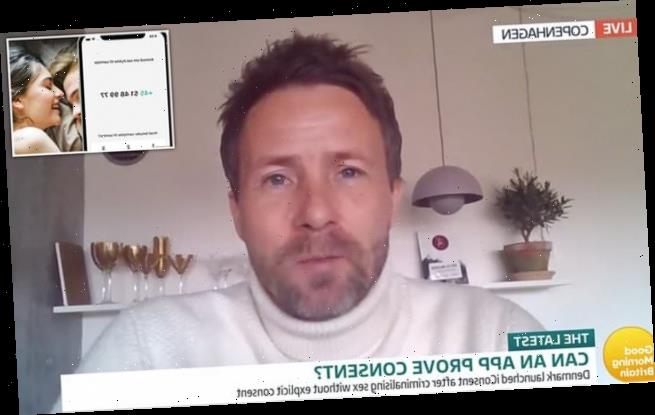 Will consent apps put women in MORE danger? Experts blast concept of ‘pressing a button’ to agree to sex and say it creates ‘a lot of room for abuse’ because ‘consent can change minute by minute’

Relationship experts have criticised an app which allows people to give consent from their smartphones saying it’ll cause ‘more harm than good’.

Danish app iConsent gives users permission for ‘one intercourse’ which is valid for 24 hours and can be withdrawn at any time.

It launched earlier this year after the country toughened its rape laws to require proof of explicit consent.

Mikkel Flyverbom, a professor of Communication and Digital Transformations at Copenhagen Business School, appeared on Good Morning Britain today where he warned the app would reduce ‘human interaction’ to a contract at the ‘click of a button.’

Sex therapist Charlene Douglas and dating author Nichi Hodgson agreed the app ignores the fact that consent can be withdrawn, and said it leaves ‘a lot of room for abuse’. 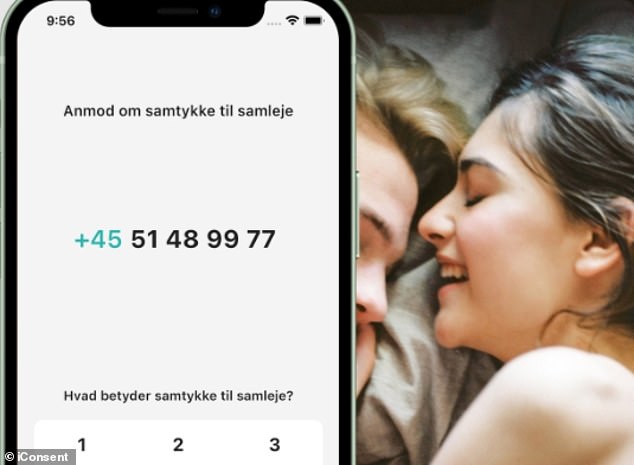 ‘I really think it’s a problematic use of technology,’ said the professor. ‘We can use technology for so many things, but in this case I think it’s trying to fix something really complex about human communication through a  click on an app.

‘I think that actually does more harm than good in this context, becuase it really reduces so many conversations and human interactions into something that is a contract in an app.

‘I think that is not the solution we need for this, we need to have conversations about this, but not in this shape.’

The professor admitted he originally thought the app was a ‘joke’, because he felt the issue of consent is far too complicated to be reduced to a contract made on a smartphone. 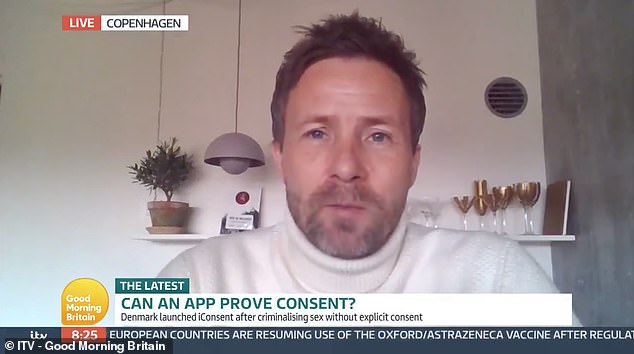 Mikkel Flyverbom, a professor at Copenhagen Business School, appeared on Good Morning Britain today where he warned the app would reduce ‘human interaction’ to a contract at the ‘click of a button’

‘I think those things can change minute by minute in these types of intimate interactions that are about consent,’ he said.

‘When I first saw the app I thought it was a joke. because I really think it reduces something way too complex into a contract.

‘Think of how difficult [it could be] if you can’t get to your phone and something goes wrong, if you change your mind through the night. All of these things are not captured in this type of app.’

British journalist and relationship expert Nichi, 37, went on to explain that the all-encompassing consent app could allow one party to pressure the other into sex acts they don’t feel comfortable with.

‘Say a couple are in a dynamic where there’s a control element going on,’ she said.  ‘You can have someone persuade someone to agree to a lot of sex acts they’d don’t actually want to consent to, there’s a lot of room for abuse.’ 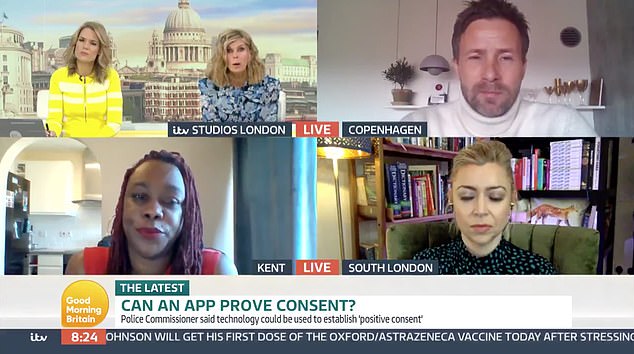 Sex therapist Charlene Douglas (bottom left) and dating author Nichi Hodgson (bottom right) agreed the app ignores the fact that consent can be withdrawn, and said it leaves ‘a lot of room for abuse’

London-based intimacy coach Charlene predicted that consent apps won’t take off in the same way dating apps have, and that not only is the app problematic but takes away the ‘fun’ of having sex.

‘I think there are some concerns,’ she said. ‘That women may decide at the beginning of the night and then change her mind and it doesn’t necessarily capture that.’

She went on: ‘I think if you think about dating apps back in the day, people were quite sceptical about dating apps and now it seems an easy way to meet somebody. I’m not so sure whether a sex consent app will do the same thing.

‘I agree with Nichi it’s about communication and having those conversations about consent, and it adds an element of mistrust to a sexual relationship and that’s not an ingredient you need to have fun and connect with each other.’ 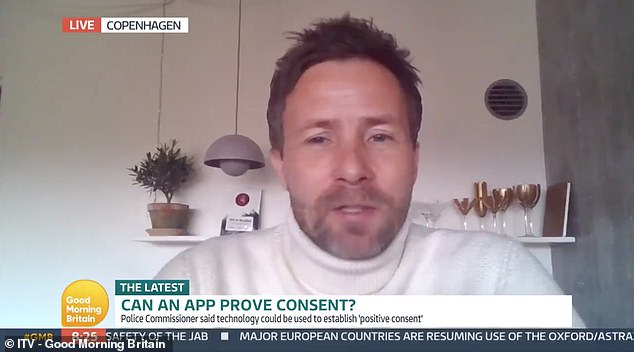 The professor admitted he originally thought the app was a ‘joke’, because he felt the issue of consent is far too complicated to be reduced to a contract made on a smartphone

Denmark’s parliament passed a new law in December expanding the definition of rape to include any sex without explicit consent.

The iConsent app was launched the same month, ahead of the new law coming into effect on January 1.

Developers say the app gives people the ‘opportunity to document your consent to intercourse’ by allowing lovers to send and receive requests via their phones.

But they add that ‘consent in the app can never stand alone, and that it is up to you and the other party to secure your consent before, during and after intercourse’.

The encrypted data is stored on the app in case it is needed for criminal inquiries, although experts have cast doubt on whether it would ever really be used in court.