The town crier is a rapper, the heroine is a feminist ambitious to become a fashion designer and the handsome prince has a sister who wants to reform the kingdom with homes for the poor and a campaign to replace coal with wind power.

Welcome to the new Cinderella, a story tailored to suit the temper, tastes and customs of our times. It may be set in the usual fairytale realm but anachronisms are heartily embraced. The soundtrack resonates with contemporary pop hits and despite the script’s cheerily tongue-in cheek tone, it plainly means what it says. This is a Cinderella who will craft her own happy ending, prince or no prince. 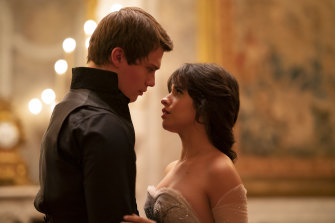 The peasants, a robust lot, launch the festivities with a vigorous chorus of Janet Jackson’s Rhythm Nation. Then it’s the turn of the star, Cuban-American singer Camila Cabello, who makes Cinderella’s intentions plain with a song she co-wrote. Belting out the lyrics, “You’re gonna know my name,” she spells out her desire to demonstrate her dressmaking skills to the village and beyond. By the time she’s finished, you’re almost expecting her to get up from her Singer sewing machine, open a laptop and show off her website.

This is all happening in the basement of her wicked stepmother’s house. Upstairs, we’re about to meet the stepmother, Vivian, played by Broadway success Idina Menzel, otherwise known as the voice of Elsa from Frozen. She, too, makes her intentions clear with a verse or two of Madonna’s Material Girl by way of trying to educate her airhead daughters (Maddie Baillio and Charlotte Spence) in the workings of the dating game.

The idea for a re-vamped Cinderella was dreamed up by James Corden, who lends his irrepressible tones and temperament to the tubbiest of the three mice who serve as Cinderella’s confidantes. And the film was written and directed by Kay Cannon, who did Pitch Perfect and its sequels.

Neither of these two could ever be accused of understatement and no opportunity is lost when it comes to pushing the message home. This is a kingdom ripe for social revolution and Cinderella is destined to show how it’s done.

Chief reactionary is crusty King Rowan (a grey-bearded Pierce Brosnan), who’s trying to hustle his son, Prince Robert (Nicholas Galitzine) into a political marriage to a strong-willed princess who shares his desire to unite their two kingdoms and take over a large chunk of the map. But Robert spots Cinderella at the village market and instantly falls in love.

The film doesn’t come from Disney but Disney’s enthusiasm for taking a revisionist line on the classics is catching. A movie idea is always easier to sell if it has familiarity on its side but the success of Disney’s cleverly caustic take on the early life of 101 Dalmatians’ Cruella de Vil has raised the bar. A sharp wit is now an essential part of the package and this one doesn’t quite measure up.

It has its moments. Minnie Driver does a nice line in weary disdain as King Rowan’s queen, who has spent too much of her life silently waving from a balcony while her pompous husband drones on, and Corden and his fellow mice (James Acaster and Romesh Ranganathan) extract a lot of fun from their temporary transformation into human form after Cinderella’s “Fairy Godparent” appoints them her footmen and instructs them to take her to the ball. To these three, every bodily function is now a new adventure.

The Godparent is played by Billy Porter, star of Pose and Kinky Boots, who has declared his determination to be looked upon as “a walking piece of political art”, so the extravagance of his outfit is not exactly a surprise. He’s a vision in gold with an imperious manner to match and the footmen/mice take to muttering about his bossiness.

It rollicks along with a lot of help from the songs, which lift the spirits as well as lending pace to the plot but the insistence of the message-making means Cinderella and her Prince fall short of making magic together.