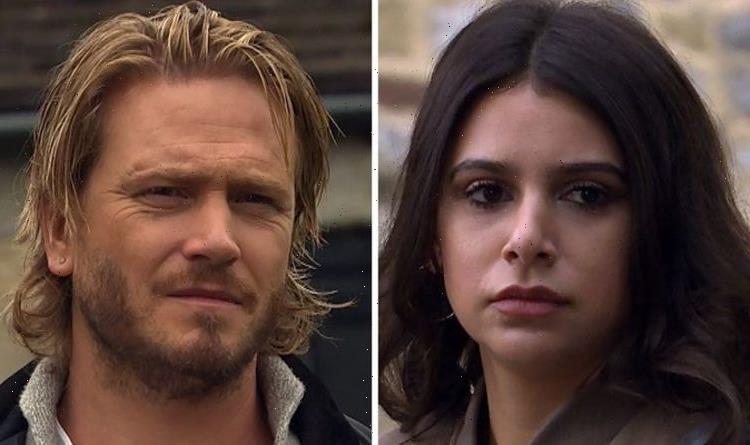 Meena Julta (played by Paige Sandhu) has been battling her jealousy in recent weeks as she’s watched boyfriend David Metcalfe (Matthew Wolfenden) and enemy Victoria Sugden (Isobel Hodgins) grow closer due to their childcare arrangements. Just a few weeks prior, David and Victoria shared a kiss after David’s son Theo went “missing” which caused viewers to wonder if Meena saw. Wednesday night’s episode saw Meena and Manpreet Sharma (Rebecca Sarker) leave the cobbles for Ibiza as Aiesha Richards (Shila Iqbal) had suffered a moped accident resulting in a coma. Will Meena be able to trust her boyfriend, or does she have a sinister trap to isolate him for herself?

After finding out about Aiesha’s accident, Manpreet hasn’t been able to think straight and booked a flight for her and Meena to go and see her in Ibiza.

Walking into the store with Meena, David asked her: “Hey, how you holding up?” to which she replied: “I’ll be better once we’re on the plane.”

Meena told David that Manpreet had spoken to Aiesha’s doctors that morning and informed them they had put her in an induced coma.

David praised Meena for looking after Manpreet so well, but it backfired with Meena abruptly asking: “And who’s looking after me?”

With David looking confused, she continued: “You’ve seen the state of her I’m not sure I can handle her on my own, what if Aisha dies!”

“That’s the spirit,” David interjected before she continued: “I mean it, David, I’ve hardly slept from worrying.”

She then asked David if he would go to Ibiza with her, however, David declined the offer telling her he couldn’t drop everything and had the shop and Theo to look after.

A little later, Meena bumps into Victoria just before she goes into her house and startled Victoria so much that she dropped her keys.

Viewers will remember that Meena had previously entered Victoria’s home without permission, resulting in Victoria calling the police thinking someone had broken in.

Meena asked: “Thought I’d see how you were after your little fright yesterday,” to which Victoria replied: “Feeling more daft than anything, the police made it pretty clear no one got in here.”

Victoria then asked about how Manpreet and Aiesha were doing, where Meena informed her they were flying out to Ibiza that evening.

Talk soon turned to David when Meena said: “The thing is I’m scared of leaving David here alone if you get my drift?”

Noticing Victoria’s confusion about what she had said, she continued: “Look, the fact is there’s plenty of women who would pounce giving the chance once I’m away.”

Victoria interrupted: “But you two are really good, right?” Meena smiled at her statement and went on to confirm they were “crazy good.”

“I don’t know, maybe I’m just being paranoid, doesn’t help that an ex did the dirty with some random when I was on a girls’ holiday a few years ago, gives you like trust issues, let’s say,” Meena explained.

Comforting her, Victoria commented: “Yeah, I guess that would and for what it’s worth, I don’t think you’ve got anything to worry about.”

Soon it was time for Meena to leave, and she gave David a whole speech about how much she was going to miss him, meanwhile Manpreet was in the taxi getting annoyed with her.

As Meena was about to get in the car, David got a notification on his phone and showed Meena: “I just received this notification, what’s that?

“Oh that, yeah, I thought it would be cute if we shared our locations with each other whilst I’m away.

“That way I’ll always be able to picture what you’re doing and feel closer to you,” Meena explained.

Taken back by what she had just told him, David asked: “What really?” with Meena replying: “Yeah, I thought it would help me feel less alone, just press accept it’s no biggy.”

Reluctantly David accepted the invite, but not before telling Meena that he was never more than ten feet away from the house or the shop.

Meena has been known to be a big liar around the village, so could she be making it all up that she is going away to Ibiza and unexpectedly return when he’s with Victoria?

Or is this a way for her to trap David into getting caught with Victoria, giving her an excuse to stop David from seeing Victoria altogether?