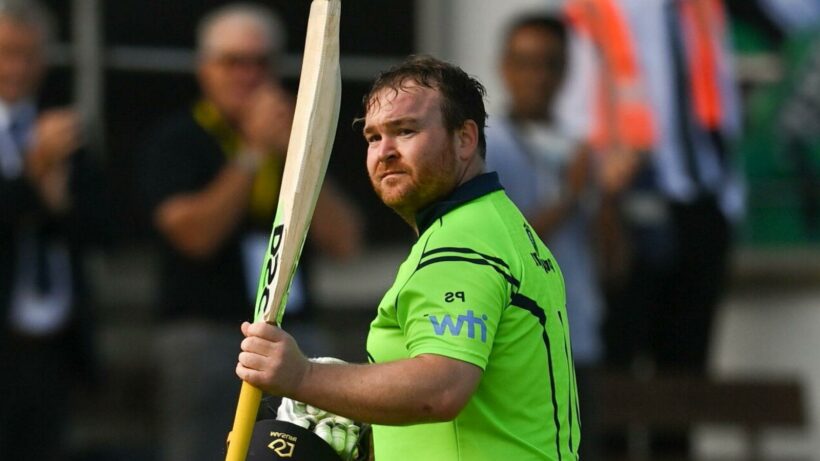 Paul Stirling smashed an unbeaten 115 from 75 balls – his first T20I century – to help Ireland overcome Zimbabwe by 40 runs at Bready and take a 2-1 series lead.

The powerful opener, who became only the second Ireland batsman after Kevin O’Brien to reach three figures in a T20 international, struck eight fours and eight sixes to set up his side’s total of 178-2.

Seamer Mark Adair then took 3-11, while Josh Little, Ben White and Shane Getkate picked up two wickets apiece as Zimbabwe were bowled out for 138 in reply.

Put in to bat, Ireland lost O’Brien cheaply, miscuing Luke Jongwe to mid-off in the powerplay before Stirling and skipper Andy Balbirnie put together a partnership of 77.

Ryan Burl (1-30) eventually broke the stand, having Balbirnie caught in the deep for 31, but Getkate joined Stirling in a savage assault on Zimbabwe’s bowlers during the death overs.

The pair accumulated 69 from the last 27 balls, with Stirling smashing Tendai Chatara for three sixes in the penultimate over – and the 179 target always looked likely to be beyond Zimbabwe, who lost wickets regularly and failed to build any partnerships of note.

Captain Craig Ervine was the only batsman who threatened to get Zimbabwe close, hitting 33 from 18 but, after he was bowled by Getkate, only Burl (26 from 23) held up Ireland’s march towards victory.

The home side can clinch a series success in the fourth T20I, which takes place at the same venue on Thursday.