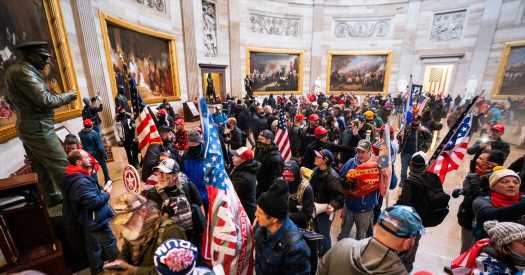 The swimming coach did not know what to expect when he dialed Klete Keller’s phone number.

An explanation of why Keller, an Olympic gold medalist, had been in the mob that stormed the U.S. Capitol a week earlier? A defense of his actions, which have left him facing criminal charges? Denial? Rationalizing? Rage?

The last thing he expected was for Keller, the decorated swimmer he had known as a merry prankster, to dissolve into tears.

“He apologized to me,” Mark Schubert, who once trained Keller at the University of Southern California, said in recounting their conversation after Keller’s arrest last week. “He kept repeating, ‘You’ve done so much for me, and I let you down.’ He kept saying over and over, ‘I didn’t mean for any of this to happen.’”

Of the dozens of people now facing charges and possible prison sentences for invading the Capitol, only a handful have drawn more attention than Klete Keller, a three-time Olympian who won two gold medals as a relay teammate of Michael Phelps.

Yet within days after he was spotted in videos of the pro-Trump crowds that assaulted the Capitol, friends and former teammates of Keller, 38, turned him in to the F.B.I. Strangers demanded that he go to prison. And prominent voices called for him to be stripped of his Olympic medals.

Keller, through his lawyer, Edward B. MacMahon Jr., declined to be interviewed.

To those who know Keller best, it was nothing less than bizarre to see a man who had once stood atop an Olympic medals podium with his hand over his heart during the national anthem — the personification, in that moment, of American greatness and success — acting as a part of a mob bent on disrupting the United States’ democracy. But they could not say they were surprised.

In addition to his successes, they also knew of his professional setbacks and the slow personal unraveling that had followed his triumphs. They were aware of his struggles to settle into a career; of his divorce; of the child custody dispute that had separated him from his three young children; and of a dark period in which he spent nearly a year living out of his car. 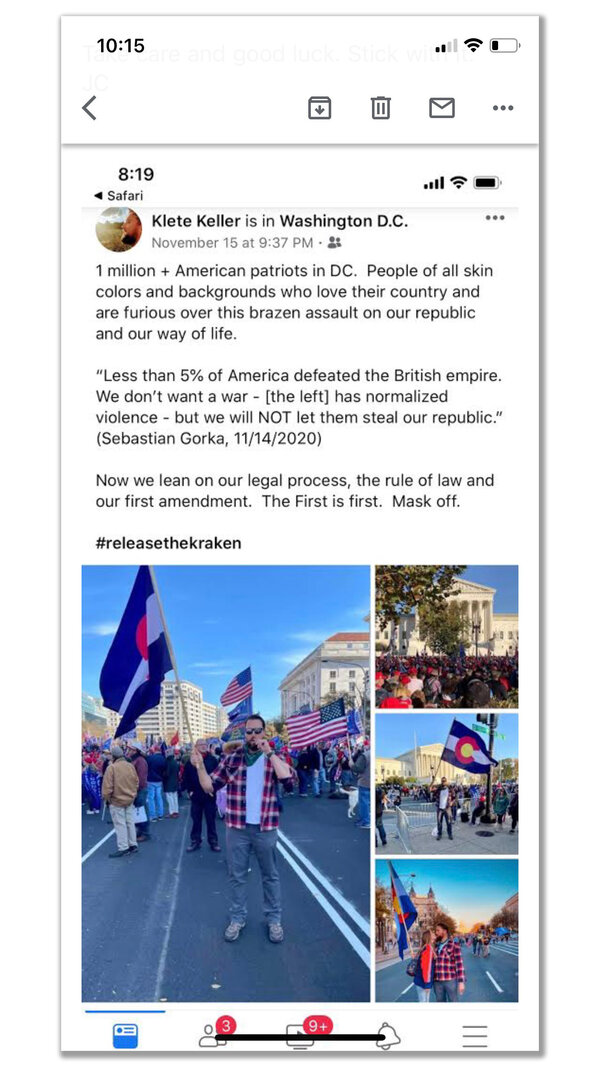 They also knew his politics. Keller, who lives in Colorado, had telegraphed his allegiance to President Trump on his now-deleted social media accounts for much of the past year, they said. In November, he traveled to Washington to attend an election protest and pro-Trump rally labeled the Million MAGA March. Keller had marked the day with a Facebook post in which he posed in Washington’s streets, quoted the conservative firebrand Sebastian Gorka and railed about “this brazen assault on our republic and our way of life.”

Still, after his name began to show up in newspaper headlines and television news broadcasts, a few of those closest to Keller chose to see a glimmer of hope in his easy identification. If he had gone to the Capitol with mayhem on his mind, they told themselves, he surely wouldn’t have shown up unmasked and wearing his U.S. Olympic team jacket.

The Giant as Jokester

During a swimming career that carried him to three Olympics and five Olympic medals, the 6-foot-6 Keller was known for his affability. A towering man, he had a foghorn laugh that cut through the tedium and tension of high-pressure athletics. Teammates from the 2004 and 2008 Olympic squads described him in interviews as jovial, charismatic, goofy and entertaining.

He lived to be liked, and on the national teams he was widely embraced. Known as a champion prankster, he pulled off a memorable stunt at the 2008 Olympics in Beijing. After catching one of the big, loud beetles squatting in the athletes’ village dormitories, he placed it at the bottom of a giant tub of pretzels in the U.S. team room, then maintained a straight face until someone finishing the snacks shrieked upon snatching the beetle, sending half the team sprinting for the door.

While none of those interviewed condoned Keller’s appearance at the Capitol — and he is not accused, most notably in the federal charges, of doing anything violent — his acquaintances also noted there was a melancholy side to him, a sense that he was going through the motions of swimming rather than reveling in the sport.

Dave Salo, who coached Keller in the lead-up to the 2008 Olympics, said he had a hard time squaring the swimmer he knew, whom he described as “nonconfrontational, quiet, relatively passive,” with someone who would twice travel across the country to participate in protests about the 2020 election.

“I was surprised that he would find the internal motivation to hike out to D.C.,” Salo said.

In a sport known for its rigor and discipline, others remembered, Keller could fall out of shape almost as fast as he could swim — packing on pounds after a competition like an actor preparing for a sedentary role, only to shrink back to racing shape as another Olympics beckoned.

So effortlessly did Keller glide along life’s surface that for a long time few people had any inkling of his personal struggles away from the pool. In the months before the 2004 Athens Olympics, for example, Keller endured a stretch of sleeplessness and malaise that culminated in what his coach at the time, Jon Urbanchek, described as an “emotional breakdown.”

Keller rebounded to deliver one of the signature moments of those Games, holding off the Australian star Ian Thorpe over the final 100 meters of their anchor legs to clinch the gold for the United States in the 4×200 freestyle relay. It was his second medal of the Olympics, and the fourth of five he would eventually claim in his decorated international career.

He later admitted it was a mistake to stick with swimming after his star turn in Greece. In a 2014 interview with NBC Sports, Keller said he regretted that he had not retired after Athens. Around this time, he told a different interviewer, he had entertained the idea of enrolling at Arizona State to study criminology. But unsure of his path, Keller chose to stay with what he knew.

“It’s not right, but I still probably hold some bitterness toward myself mostly, but also a little bit toward my sport, because I let myself get too deep into it,” Keller said at the time.

After earning a third freestyle relay medal — his second gold — at the 2008 Beijing Games, Keller walked away for good. Having finally earned his bachelor’s degree, he married and started a family. Once again, at least outwardly, he appeared to be moving forward with ease.

From Riot to Impeachment

The riot inside the U.S. Capitol on Wednesday, Jan. 6, followed a rally at which President Trump made an inflammatory speech to his supporters, questioning the results of the election. Here’s a look at what happened and the ongoing fallout: