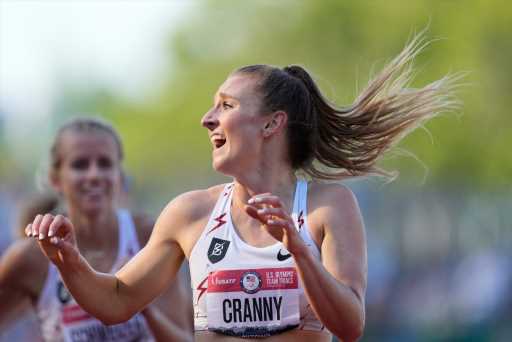 Before each season, Niwot track and field head coach Maurice Henriques handed out “Getting To Know You” forms for every athlete to fill out that included season-long and long-term goals. When Elise Cranny was a sophomore, she wrote: qualify for the Olympics.

Nine years later, Cranny received a text message from her former coach after the Olympic Trials in June. It was a picture of her sophomore year form. Nearly a decade later, her dream had become reality. Her goal of qualifying for the Olympics came true.

“I was reflecting a lot on that and the incredible team and coaches at Niwot,” Cranny said. “… They really opened my eyes to the world of running and the opportunities going into college.”

After establishing herself as an elite distance runner at Niwot, then building on that at both Stanford and Bowerman Track Club at the pro level, Cranny still goes back to her training roots in Colorado. At the Olympic Trials in Eugene this June, she surged down the stretch in the 5,000-meter race to punch her ticket to Tokyo with a first-place finish in 15 minutes, 27.81 seconds.

All the work, all the training, all the efforts her coaches invested in her, paid off with her first Olympic bid.

“When you talk about wanting to work with dedicated and committed individuals who are talented and disciplined at their craft, that’s what she is,” said Jerry Schumacher, head coach of the Bowerman Track Club. “She’s incredible to work with as a coach.”

Do you love watching the Olympics? Come talk about the Games with us on our exclusive Facebook group.

Do you love watching the Olympics? Come talk about the Games with us on our exclusive Facebook group.

Cranny’s Niwot roots remain strong all these years later, as evidenced by the support from her Cougars’ community that set her up for success.

“When I crossed that finish line at the Trials I was overwhelmed with gratitude for the support I felt from Colorado, from Niwot and even the number of messages I got from people I went to high school with, people I was on the team with back then, that’s just so special to me,” Cranny said. “These are from people you maybe haven’t seen in a lot of years but you can still totally feel the genuine support.”

As one of the most decorated girls distance runners in the country during her high school days, Cranny leans on her early success. And many of the runners who have followed in her footsteps cite Cranny as an inspiration for their own accomplishments, as the program has transformed into one of the most dominant in the state.

Just days after Cranny locked up her Olympic bid, the Cougars won Class 4A boys and girls team state titles for the second straight competition.

“They (Niwot) inspire me just as much, if not more,” Cranny said. “I’m definitely in correspondence with some of them and being able to follow them through state, following Niwot track in general and the domination they’ve had over the past couple years has been really exciting.”

Niwot senior Taylor James is following Cranny’s trail as another Stanford-bound runner. James was integral in the Cougars’ 4A title run and will leave the program as a 10-time individual state champion. Another Niwot standout, Princeton-bound senior Lucca Fulkerson, took first in the 3,200-meter race — the same one Cranny set a high school record in (10:17.48).

“She’s so impressive and I would love to be up there with her at that level someday,” Fulkerson said. “She’s such an inspiration.”

For high school standouts such as Fulkerson, the Olympian has solidified the standard for long-distance runners in the Cougars’ program.

“That adds another piece of motivation for me not only going to the Olympics and representing the U.S, but representing Niwot and Colorado and the community that made me who I am today,” Cranny said.