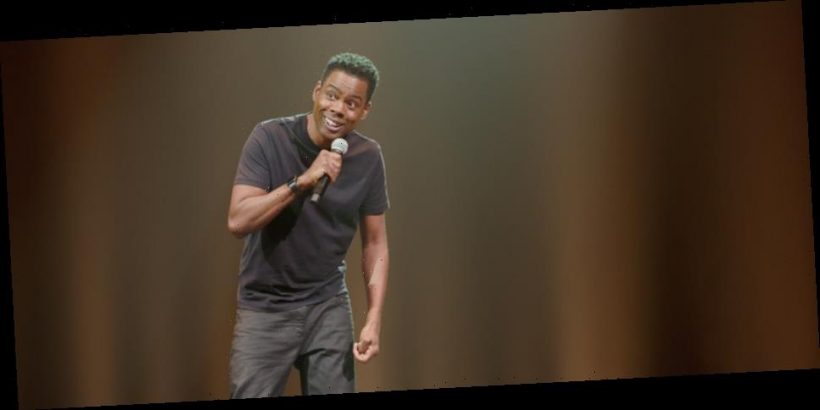 Chris Rock is back with a new Netflix comedy special! Well, okay, it’s not exactly new. Instead, Chris Rock: Total Blackout is an extended version of Rock’s 2018 Netflix stand-up special Chris Rock: Tamborine. In the Total Blackout trailer below, Rock himself tells us that the best way to describe this is as “a remixed version of a special.” The remix will feature about 27 extra minutes of material, including “never-before-seen jokes, interviews, and behind the scenes footage.”

Just what is Chris Rock: Total Blackout? It’s a “remix” of Rock’s Grammy-nominated 2018 special Tamborine, where “Chris Rock takes the stage with searing observations on race, fatherhood, and politics. The extended cut includes never-before-seen jokes, interviews, and behind the scenes footage.” Bo Burnham, director of Eighth Grade and a comedian himself, helmed the special, which was Rock’s first stand-up special in 10 years. The original Tamborine synopsis adds more insight:

Emmy and Grammy award-winning comedian Chris Rock, who redefined stand-up comedy with his hilarious and brilliant takes on relationships, race and society, comes to Netflix with Chris Rock: Tamborine, his first stand-up special in ten years. With his trademark laser-like observations, Rock covers the gamut of contemporary issues, with incisive and insightful commentary on life.

So imagine all of that but with more jokes. It’s an interesting idea – has there ever been an extended cut of a stand-up special? Rock himself says it’s the “first time in history” this has happened in the trailer, and who am I to argue with Chris Rock? And now here’s the part of the story where I tell you I haven’t watched Tamborine, so I can’t add much more insight into the matter. That said, you don’t need me to tell you that Rock is one of the funniest stand-up comics around and that his 1996’s special Bring the Pain remains a classic.

Total Blackout won’t be the last time we see Rock in 2021. He’s also set to appear in Spiral: From the Book of Saw, a reboot of the Saw franchise. Rock came up with the pitch for the film himself, and co-stars with Samuel L. Jackson. The film was originally set to open in October 23, 2020, but was moved up to May 15, 2020. However, the coronavirus got in the way, and now Spiral is slated to arrive on May 21, 2021. Fingers crossed that things will be back to some semblance of normal by then.