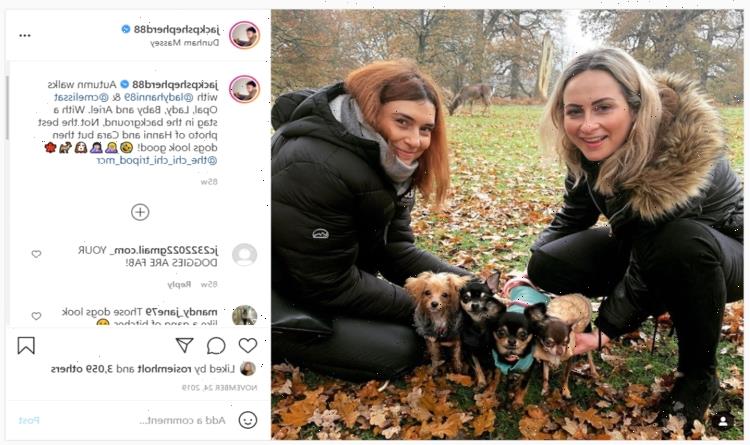 But what about the stars of ITV ‘s longest-running soap and their own pooches away from the cobbles? It turns out that the Wetherfield actors are huge dog lovers! Some are the real-life pets of their on-screen co-stars, while others were welcomed into their owner’s lives during the coronavirus pandemic. Let’s take a look at some of the casts very own pet pups:

Known for playing Kirk Sutherland for more than 20 years, Andy’s character adopted Peanut the Dachshund on the show.

In October 2020, the actor and his wife Nicola Willis got Rolo the puppy joining around 3.2 million households that welcomed a pet into the family during lockdown.

The pup even took on the challenge of climbing Rivington Pike in April, making it to the top with Andy and Nicola in tow.

The Coronation Street actor revealed that all of the pups had been given to the charity Guide Dogs to be trained and help people across the nation.

Charlie, who plays Imran Habeeb said that he hopes that his other retriever, Sarah, may go on to have a litter in the future.

He said: “Goodbye, babies. I’ll miss you all very dearly. Time for you to go out into the world and do some real good, just like @guidedogyogi and your other half brothers and sisters.”

In another post, he added: “We’re getting regular ‘pup-dates’ from their Puppy Walkers, for which I’m very grateful.

“Thanks to you all for taking on such a worthy and often overlooked responsibility in these dogs’ development.”

Preferring to keep her personal life private, Cherylee, who stars in the ITV soap as Izzy Armstrong, has shared with fans a handful of photos of her dog Bernard.

Her clever canine helps the actress who uses a wheelchair carry out daily tasks such as passing her dry clothes to fold up.

Cherylee posted on Twitter in 2019 that she was looking for an assistance dog, which Bernard answered her call.

Colin is a popular pup among the Coronation Street cast having appeared in several snaps with Julia Goulding, Lucy Fallon, and Jane Danson.

Billy also urged viewers of the show to consider adopting a dog, saying: “Huge thanks to the Dogs Trust for all your help and guidance. Adopt and give one of these little beauties their forever home.”

Colin has now been joined by another black and tan sausage dog called Jean.

Like her fellow co-star, Jane Danson’s Labrador, Millie, was also adopted from Dogs Trust in 2019, going on to describe the moment as the “best decision we ever made”.

Posting on Instagram, Jane said: “Us and our girl. We have recently welcomed this little lady from the fantastic Dogs Trust Manchester. We love her already. Thank you for all your help – what a great organisation.”

Jack and Hanni shared their tiny Chihuahua Lady back in 2018, who was an only dog until later that Christmas, a second fluffy friend named Opal joined the family.

Tina O’Brien (Sarah Barlow in the soap) introduced cocker spaniel Chase to her Instagram followers in 2016, saying “life just got even more nuts”.

The cheeky spaniel most hilarious antics to be shared online was when the pup knocked over the Christmas tree in 2018.

In lockdown, Tina doubled the trouble and welcomed a cavapoochon called Cookie into the family, who has become best friends with five-year-old Chase.

Sam’s character Chesney Brown will always be remembered among fans for his close friendship with Great Dane Schmeichel before the giant dog said farewell to the cobbles in 2011.

Sadly, Sam also had to say goodbye to his black Labrador, Bella, in 2019, penning the caption: “Earlier today, I said goodbye to my beautiful black lab.

“It’s very true when they say a dog is a man’s best friend. Sleep well Bella…..You were and will always be my girl.”

Sam and his wife now have two spaniels who join them on Scottish retreats and trips to the pub.