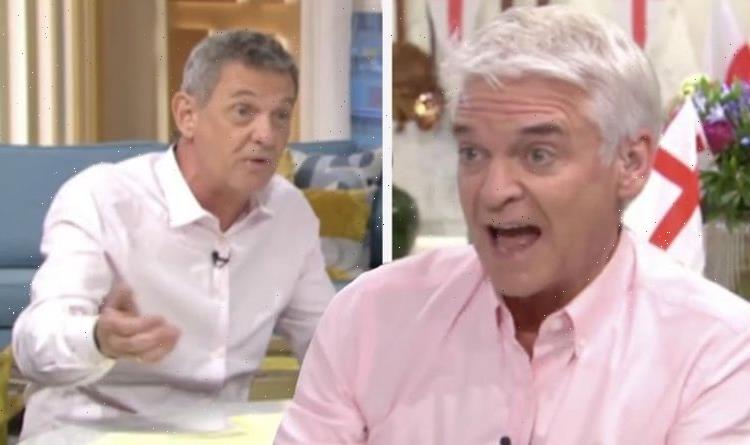 Phillip Schofield and Holly Willoughby were joined by Matthew Wright and Julia Hartley-Brewery to discuss the hot topics of the day on This Morning. After speaking about the Euro 2020 final, the conversation moved to whether a bank holiday would be given if England wins the match and then “freedom day”. Going abroad on holiday was also mentioned and Phillip argued the government “can’t lock people down” forever.

“Why are we obsessed with going on holiday in the middle of a global pandemic where we’ve had 200,000 infections in the past seven days,” Matthew argued.

“I’d like to go away but now doesn’t seem the right time. Good luck to anybody trying.”

“I went away last summer, I had Covid last year, why shouldn’t I go away?

“It’s an absolute nightmare trying to go; you still have restrictions and this huge cost, lots of young people can’t get double jabbed, there’s lot of family who haven’t been sitting at home on their laptops and been working in supermarkets.”

Matthew interjected: “You don’t have to go away! You’re making out you have to but there’s all this expense.”

“Why shouldn’t we?” Julia questioned and Matthew explained: “Dr Mike Ryan from WHO said yesterday that Boris’ decision to wind down restrictions with numbers going up has described it as ‘moral emptiness’ and ‘epidemiological stupidity’.

Phillip interjected: “How long does he think we are prepared to be locked down? I’d say to him the same as you say to these doom and gloom people, ‘you can’t do it to us anymore.’”

“He would say ‘unvaccinated people become a breeding ground for variants’ those variants that could one day overcome our vaccine regime and we’d be back to square one,” Matthew suggested.

“Every death is terrible,” Phillip continued. “Without question. But the numbers are so tiny – more people are dying from flu now.”

“We’ve still got disruption in businesses and school!” Matthew hit back. “When people go back and you have loads of people -”

“You’d still have disruption if you shut them down!” The presenter exclaimed.

Those watching This Morning at home took to Twitter to discuss.

“Yes we all want to go on holiday, but when it’s safe to do so. Lifting everything all at once is just madness. #ThisMorning,” one tweeted.

Another added: “Can they remember its not that we are all lucky enough to afford a holiday in uk let alone abroad after a year its been #ThisMorning.”

“I’m really not that desperate for a holiday, probably next year #ThisMorning,” a fan added.

Someone else mentioned: “Not fussed about a holiday that will come. I do care about people losing their homes as they were made redundant in August and still can not find work, the small independent business around me closing & those people who have not seen family in over a year!  #thismorning.”

It comes after travel restrictions ease for double-jabbed in England.

Grant Shapps, the Transport Secretary has confirmed that quarantine for British travellers returning to England from countries on the “amber” list will end on July 19 for those who have received two doses of coronavirus vaccine.

This Morning airs weekdays at 10am on ITV.