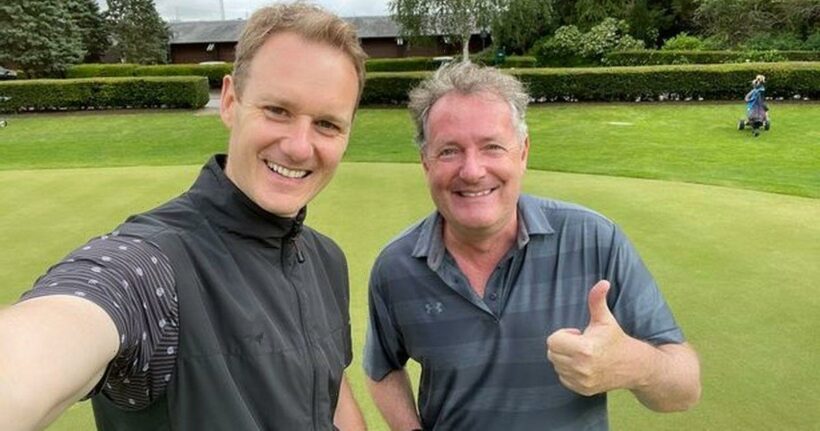 Piers Morgan has reignited his feud with rival broadcaster Dan Walker, labelling him “desperate and boring”.

The ex-Good Morning Britain host has had a long-standing feud with former BBC Breakfast presenter Dan – despite later being pictured golfing together, hinting they’d put their past behind them.

Now Piers has gone all out in his verbal war with Dan, labelling him a “mood-hoovering dullard” – and Dan quickly clapped back.

Things began when Dan was interviewing Mick Lynch, General Secretary of the RMT Union, about the rail strikes for Channel 5 News, writing on Twitter: “We live in the age of the jabby, confrontational interview & the RMT’s Mick Lynch has had a few of them.

“If you treat people with respect, you can still ask tough questions & get decent answers, allowing your audience to make their own minds up.”

But Piers soon noticed the subtle swipe as he responded to Dan, writing: “Is there anyone more deluded in world television than Desperate Dan… the world’s most boring interviewer.”

Dan then hit back: “Why is it ‘boring’ to let someone actually speak rather than shouting over them all the time?”, accompanied by three cry-laughing emojis.

Piers simply wasn’t having it and doubled down on his insults, writing: “Mate, I had to leave GMB for being too exciting/dangerous.

“You had to leave the BBC because even by their standards you’re a mood-hoovering dullard. But your pompous lectures on how to do interviews are bloody funny, I’ll give you that.”

Dan quickly retaliated with the famous GIF of Piers storming out of the Good Morning Britain studio, telling him: “You left GMB because one of your colleagues called you out. Your ‘exciting/dangerous’ response to that was [GIF].

“Next time I promise to spend at least 5 minutes on Thunderbirds.”

It comes as Piers ‘challenged’ Lynch over his Facebook profile picture of Thunderbirds baddie ‘The Hood’, with Mick replying to the broadcaster: “Do you think I look like the most evil person in the world, Piers?”

Dan, meanwhile, has responded to fan comments that suggest he has more “freedom” as a journalist at Channel 5 – telling them it’s “just not true”.

He explained: “A few people have mentioned this ‘freedom’ in regard to the Mick Lynch interview & it’s just not true.

“I have always valued journalism over sensationalism, whether at the BBC or not. I was never told what to say, or what not to say, at the BBC.”