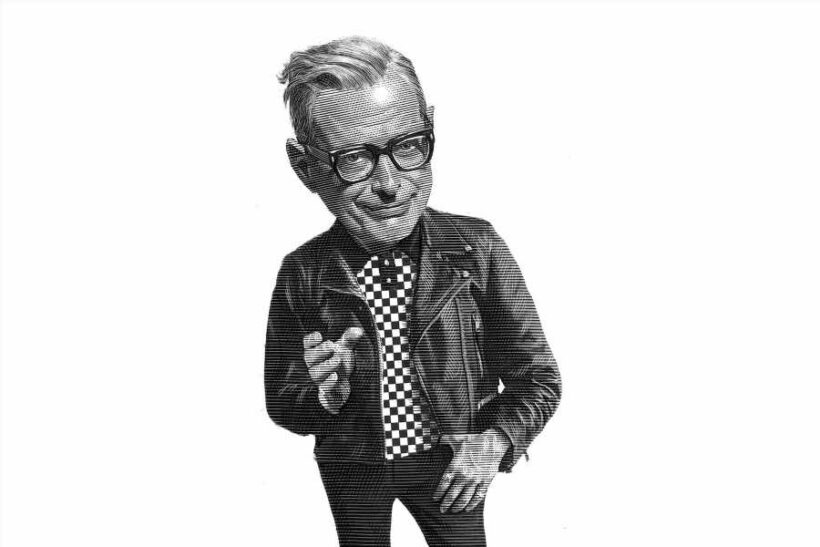 Jeff Goldblum logs onto Zoom exactly the way you’d hope: First, he’s just a voice (“I’m quite honored to do this interview,” he says), then he’s awkwardly charming (“Do I see myself at all? Oh, shit. … ‘Start video’”); then he smiles, and the conversation becomes delightful. “I am in my house in Los Angeles,” he says, sitting in front of a colorful mural of commedia dell’arte harlequins. “I’ve in been that same house for about 36 years now, up in the Hollywood Hills. Where are you?”

Goldblum has made a fruitful career out of being awkward and endearing. It’s what made the sarcastic magazine reporter character he played in The Big Chill likable, his anthropomorphic “Brundlefly” in The Fly desperately human, and his suave chaotician Dr. Ian Malcolm in the Jurassic Park movies so effortlessly cool. Outside of acting, his idiosyncrasies have helped him to become a welcome pitchman in TV commercials, a celebrated jazz pianist, and the subject of innumerable memes online. In his 69 years, Goldblum has lived many lives while maintaining his one unique perspective.

That singularly Goldblumian outlook serves as the beacon for his current TV series, The World According to Jeff Goldblum. On the show’s first season, which premiered on Disney+ in 2019, the actor indulged his interests in everything from RVs to coffee, ice cream to tattoos. And on the upcoming season, which launches Nov. 12, he explores monsters, fireworks, magic, and motorcycles, among other topics.

Watching the show, it becomes clear that Goldblum’s insatiable thirst for knowledge, a hallmark of his lovably quirky characters, reflects his off-camera mindset. In an interview for Rolling Stone’s Last Word column, he explained how the show broadened his outlook and reflected on how he achieved his worldview in the first place.

Is The World According to Jeff Goldblum just an outgrowth of your natural curiosity?
Well, the show has inflamed my already substantial curiosity. I wind up going places that I wouldn’t ordinarily go. I was in the Sequoia National Forest climbing one of those trees, talking to forest scientists and experts, and I have always highly esteemed scientists anyway. My dad was a doctor, and now I’ve gotten a chance to play scientists, too.

What have been your favorite scientific discoveries on the show so far?
We did an episode on dogs. I had to hide in a cement pipe while this dog who works with first responders, firemen, and people who attend the scene after an earthquake or when a building has collapsed [searched for me]. And these dogs can go over a terrain better [than people] and with their noses they can find survivors. So I put myself in the position of a survivor in a kind of a concrete pipe, and this dog found me, and the firemen followed suit. It was very touching and emotional. There’s plenty to learn about animals.

You once said about Jurassic Park that your approach to Dr. Ian Malcolm was that “scientists are cool.” Have you always felt that way?
There were things in the Michael Crichton book that made that character interesting and smart and not a cliché of somebody who’s socially stunted. My experience with scientists with whom I’d come in contact — even the chaoticians that I talked to seemed cool and smart and were interesting to talk to. I’ve always found people who are passionately interested in something and contributing something to be very attractive and cool to the nth degree.

You kept a pet fly on the set of The Fly. What did you learn from watching it?
Geena [Davis] and I were rehearsing every day before we got to the set. As we got to the set, there was a fly in the trailer and either she or I caught it and put it in a plastic bag for a little bit. I’d never have called it a pet; I don’t think it ever became a pet, but I did look at it without trying to harm it. No animals or insects were hurt on this movie or in the actors’ preparatory period. But if you really stop and look [at a fly] for some period of time and see what it does and how it moves, which I had to incorporate in some way, I think I learned a thing or two about its stillness and herky-jerky movements and what its experience might be.

In 1985, you told an interviewer, “I’m not mainstream. I’m special.” How did you learn to embrace being quirky?
I was lucky enough to study with a great [acting] teacher, Sanford Meisner, who said, “You shouldn’t copy anybody. You should try to find your own voice. It may take you a long time to do that, and a lot of continual digging, but it’s worthwhile.”

And more and more, I aspire to more self-trustfulness. I’m nothing if not disciplined and conscientious. So I played piano today, as I do every day, and I tell you, I played better today than I ever had before. It’s sort of interesting to me to keep my eyes on my own paper and keep developing and working on what I love and what seems to bring my insides to full life.

What excites you about the piano, and how does it complement the rest of your artistic sensibilities?
Well, I just love it. It’s mysterious what really turns you on and gets your juices going. Music has always done that [for me], including jazz. And finding out what gets you going has something to do with acting, of course, or anything creative. You’re the authority, finally, about what does it for you.

What music still moves you the most?
[Composer Samuel Barber’s] “Adagio for Strings,” that lovely piece of music that has been used in movies. It’s the saddest and one of the most moving pieces of music. David Lynch uses it in The Elephant Man. Oh, God. It’s just heart wrenching and music does that to me.

I’ve seen On the Waterfront many times and, yes, Kazan’s direction is spectacular, and Brando just grabs you in like nobody else can. But I’ll tell you, even in the back-of-that-cab scene, it’s Leonard Bernstein’s score that moves me — and I think it’s the only movie he ever wrote a score for. The themes in that just grab my insides and do something. It can mysteriously just hurt your heart immediately and inspire something. … And I was just looking at Vertigo again and the music is by Bernard Herrmann, who did Taxi Driver and Psycho and many of those Hitchcock movies. But Vertigo, especially, my God, that movie wouldn’t be the same without that score.

I listen to jazz and my bandmates turn me on to the stuff I should have known about for all these years anyway, so I’m catching up with Thelonious Monk, Oscar Peterson, Bill Evans, Keith Jarrett, and many people. And I’m crazy about it; I love it.

When you were making your breakthrough film, The Big Chill, the cast would get together and have dance parties that weren’t even for the movie. What’s the secret to that kind of bonding on a set?
Well, it’s a sort of a miracle when it happens. On that movie, [director] Larry Kasdan set us up for it. He was all about these people being friends for years before in the backstory and had actors had who’d never met each other. So he wanted us to rehearse for four weeks together and then live all together in this sort of isolated place in Buford, South Carolina. And sure enough, his methods worked, and we just had a great time. [Kasdan’s] wife, Meg, had chosen the music that was going to be in the film, and they had that tape going on the set all the time in rehearsal. So we were, sure enough, dancing. We connected thanks to all of that.

That’s the way it’s always been for me with acting pals: You get together, like the circus, with people who were roaming and only have a fleeting brush with each other, but it demands that you are intimate in the deepest and most spiritual way and have an interesting and passionate experience that may mean something to somebody else if it’s witnessed and filmed.

You’re known for asking the crews you work with to wear name tags. Why is it important for you to have a connection with everyone on set?
I like to get the call sheet with all the crew members on it and get a little bit interested in them and learn their names. I go over it as if I’m going over my lines. It makes me feel better. Robert Altman and Wes Anderson, who works in a similar way, would say that besides the resultant movie that we make, the important thing that we were doing [on a set] is having a kind of art experience by being together.

I don’t think the actor is necessarily any more important to part of the democratic community than any other person. I feel strongly that actors certainly are not entitled to act in a childish or discourteous way toward anybody any more than the dolly grip would.

What’s the most indulgent purchase you’ve ever made?
The other day I took my six-year-old, Charlie, to his piano lesson on Ventura Boulevard and next door to it was a caviar store. While Charlie was in the lesson, [my other son] River started to wander around and he said, “Hey, let’s go in there.” He’s only four and the guy working there said, “We only have three kinds of caviar right now. We’ll give you a sample of all of them.” I said, “Sure,” and so he gave me and River a sample and then I figured, I don’t like to be the kind of person who samples anything without buying — I don’t know why, I think it’s not nice. So I said, “OK, yeah, we’ll take a tin. Give me that middle line.” It was a little more than I’ve spent for food usually. So that’s indulgent.

You’re 6’4″. What should people know about the very tall?
I guess 6’4″ feels like the perfect height for me. I wouldn’t want anything else. It was nice being tall when I grew up in high school and had to hold my own in a difficult society. It was nice getting taller, because taller meant, “Watch out. I can take care of myself. I’m big.” That’s been fine and dandy.

I’m working on a part now that requires me walking on stilts. So I’m not too tall that I don’t have a part that the director has said, “You know what you need for this part? To be about a foot taller. You need stilts.” About an hour ago, I did my stilt practicing today. So I’ve been walking around on stilts.

As your career has gone on, more people have considered you a sex symbol. Is that ever a burden?
I don’t know that I am, but it’s never been burdensome. I’m as vain as the next fella. It’s nice to feel that there’s some interest. What can I say? I’m blushing.