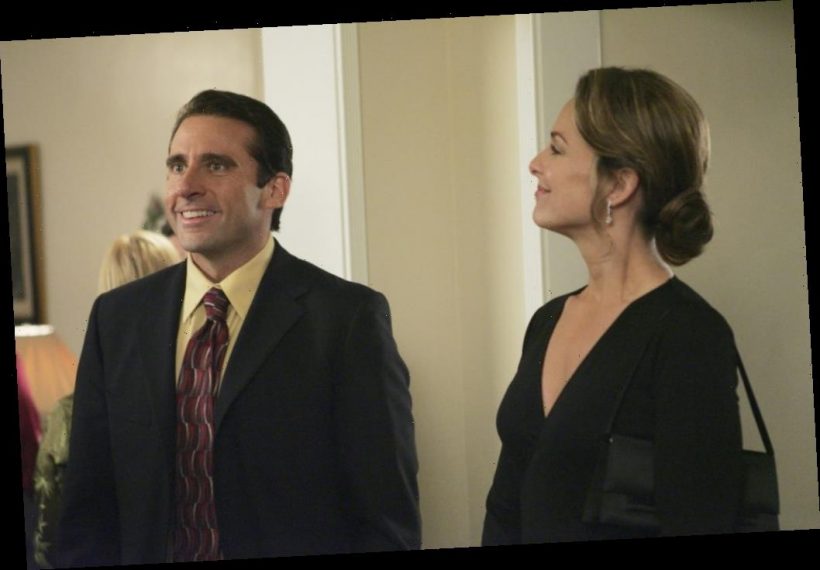 The Office fans love “Dinner Party,” and it’s a bizarre episode. Michael Scott (Steve Carell) tries to throw a dinner party, and it ends with him being heartbroken. Carell improvised a line during a dramatic scene, which made the rest of the cast break character.

Steve Carell tried to get ‘The Office’ stars to break

It was already hard for some actors to make it through scenes without laughing at how funny the scripts were. According to Angela Kinsey, who played Angela Martin, Carell would often take things a step further.

“I honestly think that Steve would drag things out like that to see when he could get all of us to break,” she said to her podcast Office Ladies co-host, Jenna Fischer, who played Pam Beesly.

Fischer admitted that he was often successful. “He’s a little sadistic that way. He would be like, ‘Oh, you haven’t broken yet? How about this?” Kinsey added.

Who wrote the ‘Dinner Party’ episode of ‘The Office’?

“Dinner Party” stands out from the other episodes of The Office for multiple reasons. Michael gets Pam (Fischer), Jim Halpert (John Krasinski), Angela (Martin), Andy Bernard (Ed Helms), and Dwight Schrute (Rainn Wilson) to the home he shares with Jan Levinson (Melora Hardin) for a dinner party. But the night spirals out of control because of his terrible relationship with Jan.

Gene Stupnitsky and Lee Eisenberg wrote the episode. The script was so good that it didn’t go through rewrites. But some moments were coming off as too dramatic for the comedy show. That’s when Carell was asked to improvise.

The script for the episode was impressive, but Carell still improvised. Office Ladies had Fischer and Kinsey talk about the episode and pointed out a line that had everyone laughing. It happened in the scene where Michael and Jan argue about not having kids.

“Guys, Steve improvised the line ‘Snip snap, snip snap! You have no idea the physical toll three vasectomies has on a person,’” Fischer said. Kinsey said, “I mean, you try not laughing with Steve Carell in front of you improvising stuff like that. We were all a goner!”

Director, Paul Feig, talked about how that line actually solved a problem in the scene. “It was a pretty dramatic scene of them like talking about having kids and all this, and so we did several takes of it. It was really good but very dramatic,” Feig said.

The director told Carell to do a take with more humor. That’s when the actor improvised that line. “That scene is so funny because it’s so heartbreaking and cringy, but also hilarious,” he said.

The line certainly makes a dark moment lighter. The jokes in “Dinner Party” are welcomed, given the awkward situation.