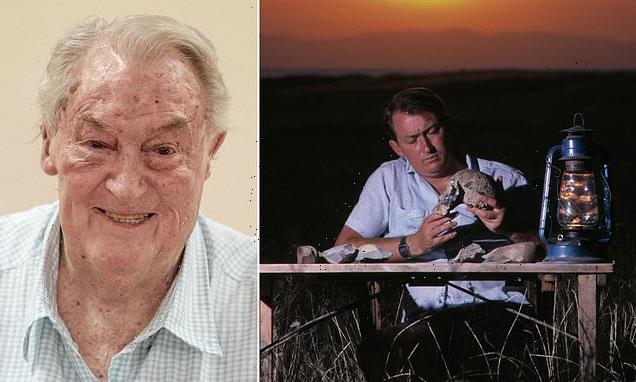 The fearless fossil hunter who saved Africa’s living treasures: TV star, ladies’ man… and a swashbuckling adventurer who lost his legs in a plane crash. Richard Leakey – who has died at 77 – was like a real-life Wilbur Smith hero, writes GRAHAM BOYNTON

On a June morning in 1993, Richard Leakey, the then controversial head of the Kenya Wildlife Service , crashed his single-engined Cessna 206 into a cattle field in the bush.

His four passengers were relatively unhurt but Leakey was seriously injured.

The aircraft’s engine had been thrust back by the impact, snapping both his legs like twigs and driving the African soil into his open wounds.

Leakey remained conscious and with typical brio was able to direct the gathering villagers to call for help.

I was in Kenya visiting Leakey that week, in my capacity as a journalist covering East African wildlife issues, and he’d invited me to fly with him to visit a national park.

Fortunately for me, I became tied up in the capital Nairobi, and in the following years we often joked about my lucky escape.

It came to mind again yesterday when I read the news that Leakey had died at the age of 77. 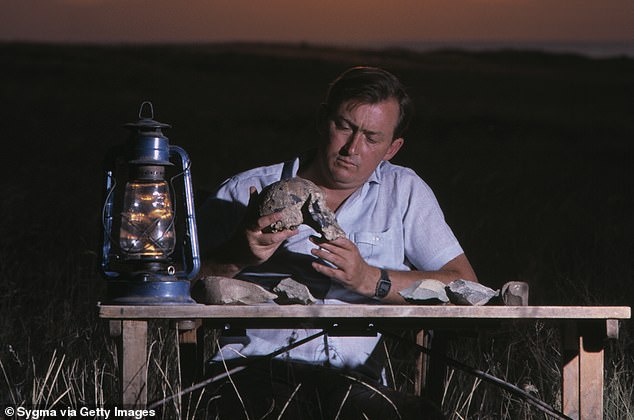 Renowned anthropologist Richard Erskine Leake, pictured during the the 1970s, has died at the age of 77

But what a life he had: in a career spanning more than half a century Leakey transformed himself from a fossil hunter, who became a bestselling author and television star — and made a seminal documentary on human evolution for the BBC — to a pioneering conservationist with the hide of a rhinoceros.

At the time of his plane crash, Leakey was pursuing an anti-corruption campaign in a country that was riven with it and where inconvenient critics were, as he jocularly put it, ‘terminated with extreme prejudice’.

He was convinced the Cessna had been sabotaged but, although he had many high-level political enemies who wanted to see him dead, nothing was ever proved.

Because he was determined to keep his hands on the tiller of the wildlife service widely known as KWS, he stubbornly refused to be transferred to a European hospital.

So, for 12 terrible days Leakey stayed in a private ward at Nairobi National Hospital, protected by 24-hour armed guards, as surgeons tried to stave off septicaemia.

Finally, he was persuaded to seek a second opinion and Professor Christopher Colton, a British trauma specialist who had recently operated on Prince Charles, was flown to Nairobi.

When he arrived at the hospital, Professor Colton said he could smell the infection from the end of the corridor. Gangrene. In his opinion, Leakey was dying.

Reluctantly, the 6ft 4 in Leakey allowed himself to be flown to the Queen’s Medical Centre in ­Nottingham, where — after four months and 14 operations — both legs were amputated below the knee.

Throughout all this, Leakey, a notorious 16-hour-a-day workaholic, maintained his exacting work schedule, continuing to run KWS from a distance.

According to one of his close friends, Georgiana Bronfman, ‘he had faxes and telephones installed and worked the whole time he was in hospital’.

Bronfman — the ex-wife of Edgar Bronfman Sr (head of the multinational drinks conglomerate Seagram) and now married to the actor Nigel Havers — said it was Leakey himself who decided on the second amputation because he didn’t have the patience to go through a time – consuming r­ehabilitation programme.

She said: ‘Richard’s attitude was, “Take off the leg and let me get on with my work.” ’ Leakey later told me he had taken the amputated legs with him to Nairobi.

‘I’d like to bury them at Lake Turkana,’ he said, referring to the stretch of water in Kenya where he’s found many of the famous fossils with which he was so strongly associated. 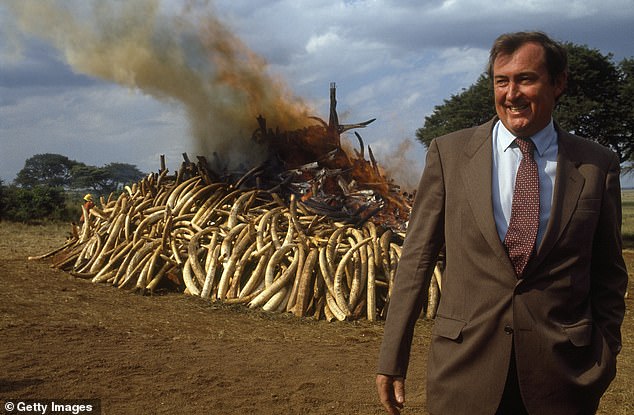 Dr Richard Leakey, pictured with ivory worth 3 million US dollars, confiscated from poachers by Kenyan authorities in 1989

He later changed his mind, fearing that at Turkana his enemies ‘might urinate on them’, and buried them instead at his home in the Ngong hills.

Although Leakey’s death this week was understandably greeted with a tide of grief from friends and colleagues across the world, it came as no surprise.

That he had lived to the relatively ripe age of 77, having survived two kidney transplants and a liver transplant, as well as the amputation of his legs, is testament both to his iron will and to his cavalier attitude towards physical setbacks.

In recent years, skin cancer had ravaged his once handsome features.

He was constantly having tumours cut from his face to the point that, when I saw him in his Nairobi office last year, his skin was so damaged I found it hard to look at him.

But the man himself didn’t give a damn and carried on as if nothing had changed.

For someone who had traded on his looks in his youth — he was a notorious ladies’ man — this was further confirmation of his steely determination not to be distracted from his various missions in life by mere mortality.

His two quite diverse missions centred on his search for the origins of mankind and his determination to preserve Kenya’s fast disappearing wildlife populations. 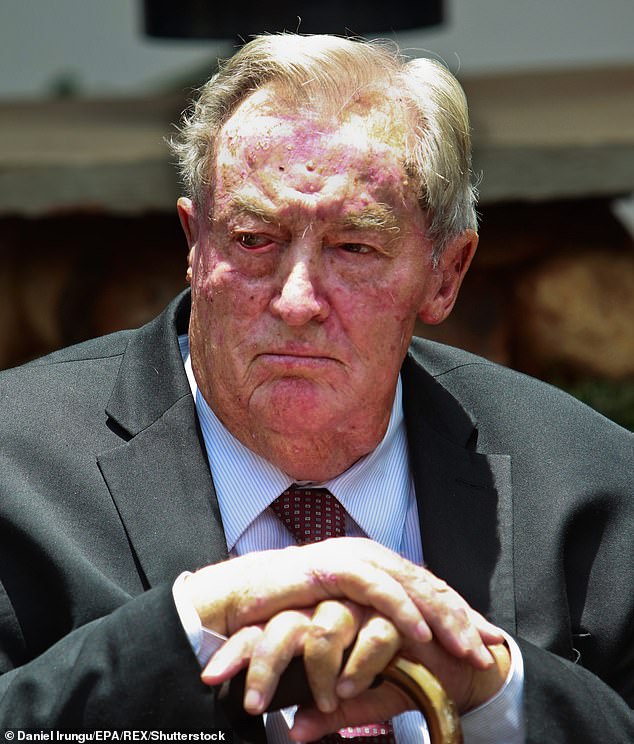 The son of famed British palaeoanthropologists Louis and Mary Leakey, his avowed intention to keep out of the family business was swept aside in his teens when he began leading fossil-hunting expeditions to Koobi Fora on the shores of Lake Turkana.

It was on the shores of another lake, Lake Natron, in 1964 that he met an archaeologist called Margaret Cropper, who was to become his first wife.

In 1970, a year after they divorced, he married a palaeoanthropologist called Maeve Epps.

In the late 1960s and early 1970s his finds in the harsh, inhospitable landscape of Kenya’s Rift Valley included Skull 1470, a two-million-year-old relic of a breed of early man known as ‘Homo habilis’, which was found broken into 300 fragments.

In two books written with science writer Roger Lewin — Origins (1977) and People Of The Lake (1978) — Leakey argued that his discovery proved that Homo habilis evolved into Homo erectus, the direct ancestor of Homo sapiens, or modern human beings.

His find saw him ending up on the cover of Time magazine and becoming something of a cult figure, the first ‘pop paleo’.

His sudden fame did not, however, go down well with the scientific establishment.

After his presentation of Skull 1470 to the Zoological Society of London, the secretary, Lord Zuckerman, responded scathingly: ‘May I first congratulate Mr Leakey, an amateur and not a specialist, for the very modest and moderated way he gave his presentation.’

Typically, he shrugged off the criticism and in 1977, published Origins with Roger Lewin, a bestseller that introduced palaeoanthropology — a branch of anthropology concerned with the origins and development of early humans — to a broad audience.

Three years later he made The Making Of Mankind, a major BBC documentary about human evolution.

Leakey’s segue into wildlife conservation took place formally in the late 1980s, when the Kenyan president Daniel arap Moi appointed him head of the country’s corrupt, bankrupt Wildlife Conservation and Management Department, which he was later to rename the Kenya Wildlife Service.

It put him in charge of 52 national parks across the country. At the time, the parks were slaughterhouses, awash with poachers and staffed largely by unmotivated incompetents. 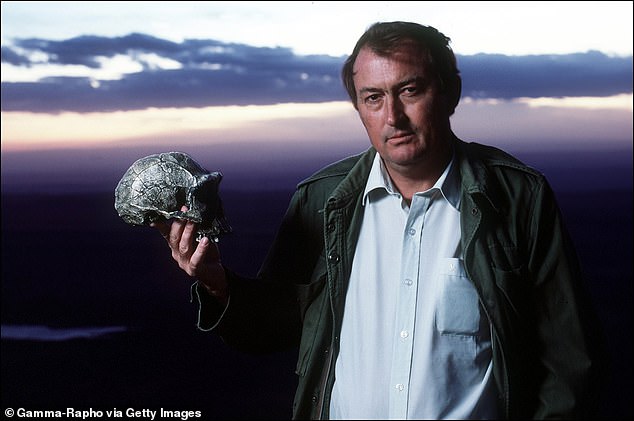 Over the previous two decades, the country’s elephant population had crashed from more than 100,000 to barely 20,000, and conservationists feared that extinction beckoned.

That Leakey arrested the decline and set up an outstanding conservation and policing programme is now a matter of public record.

How he did it — by turning the KWS into a paramilitary unit, hunting down the poaching gangs and introducing a highly controversial shoot-to-kill policy — reads like a 20th-century African thriller.

As one conservationist told me: ‘If Richard Leakey hadn’t been around then we’d have probably lost all our wildlife by now.’

Along the way in both careers, Leakey’s abrasiveness made him many life-long enemies.

In the palaeoanthropology arena he engaged in bitter wars with Don Johanson, the discoverer of the famous australopithecine fossil known as Lucy.

At the same time, his former protege and academic at the University of California, Berkeley, Professor Tim White, refused to speak to him for 40 years.

One American academic once told me that the day Leakey gave up palaeoanthropology for wildlife conservation ‘was like the lifting of the siege of Sarajevo’ for the community.

In the war zone that is African wildlife conservation politics, Leakey’s uncompromising militaristic approach to saving animals was often seen as harsh, simplistic and short-sighted.

In the late 1980s, he o­rchestrated the ritual burning of millions of dollars’ worth of elephant ivory and rhino horns at events arranged for prime-time American television audiences.

A large community of mainly southern African c­onservationists regarded these eco-­bonfires of 12 tons of ivory from the KWS storerooms as a criminal waste of assets that could have been sold to raise funds for conservation.

His response was to dismiss the southern Africans as bloodthirsty, pro-hunting barbarians. Their mutual antipathy remained undiminished.

In the end, Richard Leakey not only survived but triumphed in the African theatres of politics, wildlife conservation and palaeoanthropology because he was a true African.

In Africa, you fight to the death for your identity. Which is precisely what Richard Leakey did.