Right about now is the perfect time to Google "career-ending moves at work Christmas party" – you'll find it educational if you do.

It is not just increased emphasis on interpersonal relationships, post #MeToo, that may (but shouldn't) make knowing where "the line" is trickier – there are plenty of evergreen, unbreakable office party rules.

Once the corks are popped among colleagues, employees' recollection of what not-to-do has been demonstrated by history to become a little fuzzy.

Examining these questions may improve your chances of having no worse a dilemma the next day than "how do I get back in there to pick up my phone/wallet/Spanx/clip-in hair extentions". 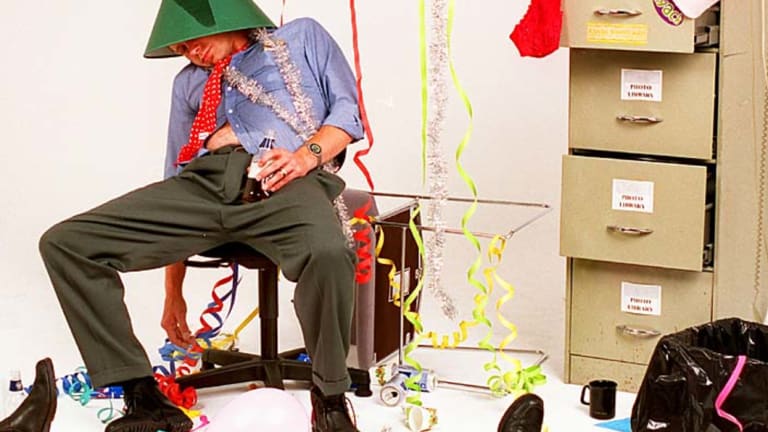 May a lamp on your head at the office Christmas party be the extent of your drunken behaviour.Credit:Julian Kingma

What have employees been sacked for after work Christmas parties?

According to workplace lawyers Slater and Gordon:

As if it needs saying, all of these are strictly don't do.

Always have front of mind that time-consuming employee training module you did in June about sexual harassment, bullying and discrimination – legally, the same standards of behavior apply at work functions as they do in the actual office.

If the rules ever did bend at the work Christmas party, they don't flex any more.

For example, Professor Beth Gaze, co-director of studies, employment and labour relations law, Melbourne University, says large employers would view defending an unfair dismissal case (resulting from someone being let go for being a sexual harasser at the office party) as preferable to defending a claim from an employee seeking damages for workplace sexual harassment (which are uncapped).

According to Georgiardis lawyers, sexual harassment at the work Christmas party is defined as:
"If someone makes an unwelcome sexual advance, requests sexual favours or engages in unwelcome sexual conduct towards you.

"This must have occurred in a manner that a reasonable person would have anticipated would cause you to be humiliated, offended or intimidated. This can include unwanted sexual contact, repeated unwelcome propositions, and comments of a sexual nature."

Sacking because of violent behaviour is very difficult to challenge.

What is deeply average, but not necessarily sackable?

Behaviour that may be a bit gross and possibly offensive to some but that doesn't actually harm anyone emotionally or physically.

A NSW police officer received a warning after showing off his party trick by opening people's beers with his genital piercing.

Can you get fired for being 'too drunk' at the work Christmas party?

The good news for those planning to go way over the top is it's unlikely that "being too drunk", per se, is reason in itself to have you sacked. If more serious actions are a result of that, even the question of whose responsibility it is for the behavior appears frustratingly murky.

In 2015, a company sacked a team leader in the construction industry (who the court heard had consumed 10 beers and a vodka) ostensibly for telling the company director and a senior manager to "f— off" and others to "suck my b—s", and also for sexually harassing colleagues.

The man won his unfair dismissal case when the Fair Work Commission ruled: "It should have been obvious at the function itself that alcohol was not being served responsibly, given that from a certain point persons were able freely to help themselves to beer and that [the employee] at an early stage presented himself to a number of persons as intoxicated."

It also found the worst of the man's behavior happened after the party's official closing time of 10pm and at another venue.

If drunkenness as the sole offence, Professor Gaze says it is unlikely you would be sacked.

What's the takeout for employers?

The message for employers is that it is your responsibility to ensure a safe work environment, even at the silly season party, and to be mindful of the amount of free alcohol on offer. Employers are advised to reiterate that the company's usual sexual harassment policies (which should be based on the Australian Human Rights Commission's guidelines) apply at the work function as much as at work.

The requirement on employers to have adequate polices to prevent or address sexual harassment, educate the workforce of those and have someone implementing them from the top, and to have adequate systems in place to address claims exists as much at the party as within the office walls.

What's the takeout for employees?

"People need to be aware that they are in a work situation, and these are professional relationships," says Professor Gaze. "They need to be quite confident before they step over that line (into a sexual advance, phsyical or verbal), they need to be sure there is that consent, rather than assuming it."

She says that given you are in a social situation with workmates, it is wise to be "even more cautious than usual" about obtaining consent, as there is often alcohol involved (which is not usually present in the workplace relationship).

Has "the line" moved after #MeToo? "I don't think the rules have changed," says Professor Gaze. "What has changed is because of #MeToo, women now, I think, are more ready to stand up and say, 'This is not OK and I don't have to put up with it'."

For employees attending office Christmas parties, and hoping to refrain from severe embarrassment or ending up as a case law example for the next generation of workplace law students, the best line of advice is this, and thank you to a UK law firm for the wisdom: "Don't start a fight, call someone mean things or be an idiot."