Michelle Obama flashes a smile on the cover of Good Housekeeping, as she dishes about having to ‘wake up long before Barack’ to get ready for events while he just had to ask ‘tie or no tie’

Michelle Obama is modeling a cozy off-the-shoulder sweater and a bright smile on the cover of Good Housekeeping, as she opens up about having to ‘wake up long before’ her husband to get ready for public events.

For the magazine’s January issue, the 54-year-old former first lady answered questions from Good Housekeeping readers, revealing how she is ‘thankfully’ getting more — and ‘more regular’ — sleep now than when she was FLOTUS.

‘I’ll always be grateful for the opportunity that living in the White House afforded us, but it probably won’t come as a surprise to anyone that sometimes it was a real challenge to keep up with the pace,’ she said. 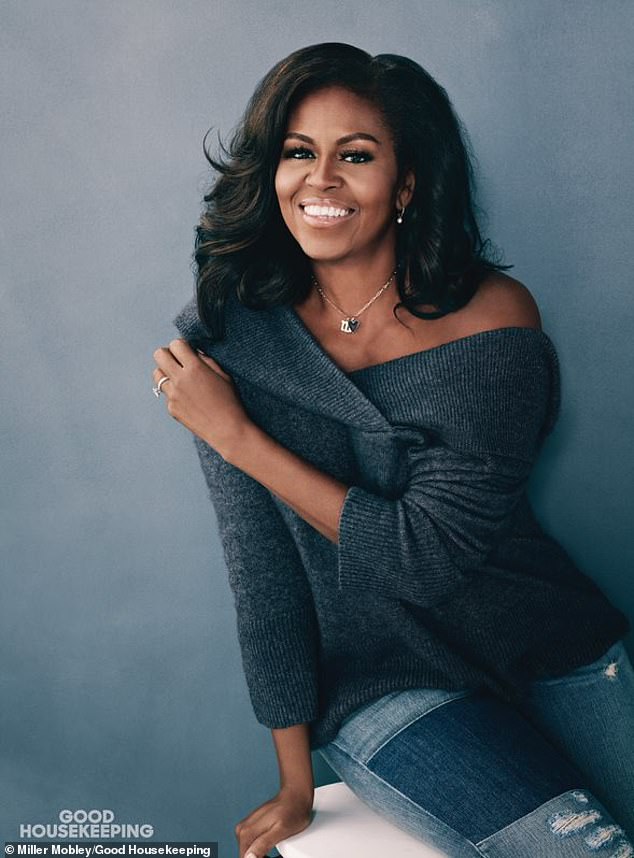 All smiles: Michelle Obama dons a cozy off-the-shoulder sweater and distressed patchwork denim in a new shoot for Good Housekeeping 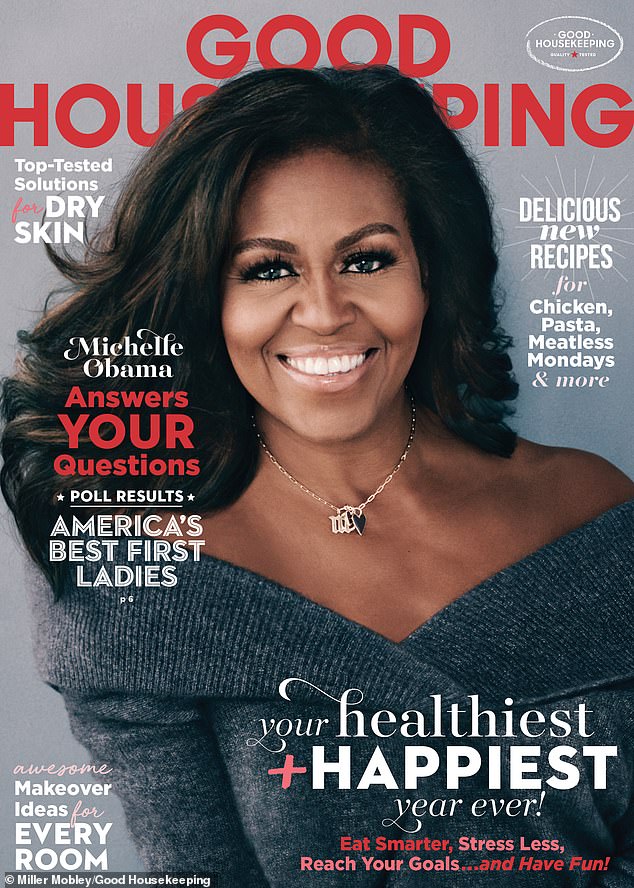 Cover star: The 54-year-old is featured on the cover of the magazine’s January issue

‘We’d be launching an initiative, or crisscrossing the country for campaign events, or visiting a community that was hurting from a tornado or a senseless shooting—sometimes all in a two- or three-day span.

‘Then, on top of the demands of our schedules, I’d usually need to wake up long before Barack to get my hair and makeup done and dress for a public event,’ she added.

‘I laugh about how easy it was for Barack to choose his wardrobe — tie or no tie? “What do you think, honey, should I roll up my sleeves?” These days, I’m more in control of my time.’

Michelle also opened up about the ‘universal’ experiences she and her eldest daughter Malia went through when they were high school students.

‘There’s a lot that’s universal. Malia and I were talking recently about all the little things we’d stress over in junior high and high school — whether we’re wearing the right clothes, a snarky comment somebody made about us, the boys we crushed on, and on and on and on,’ Michelle explained. 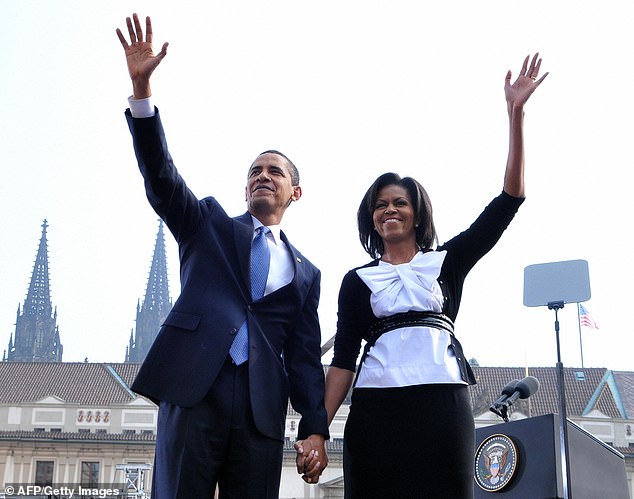 Looking back: Michelle (pictured in 2009) opened up about how she had to get up much earlier than her husband, Barack Obama, to get ready for public events when she was FLOTUS 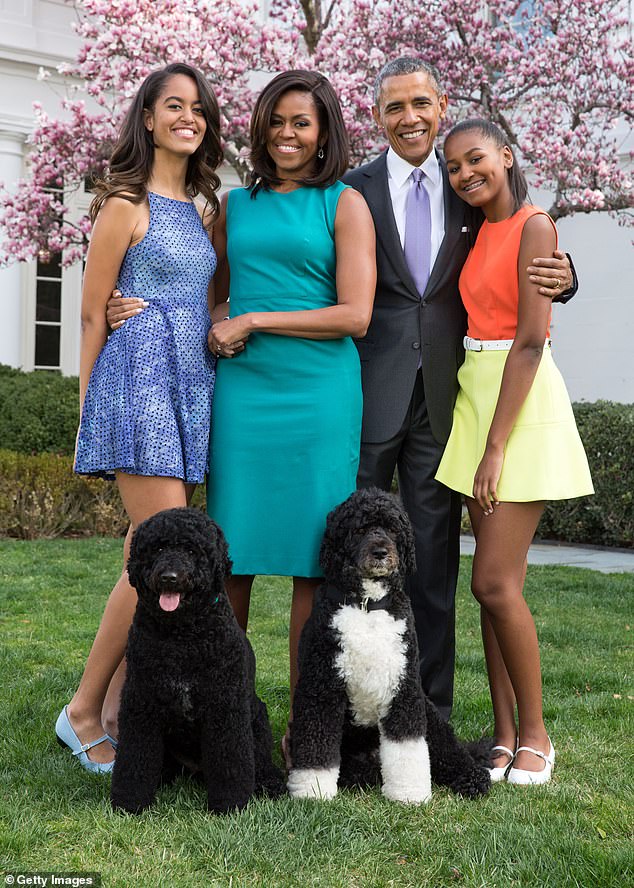 Then and now: Michelle also spoke about how her adolescence compares with her daughters Malia and Sasha’s experiences, noting that many teens’ worries are ‘universal’

‘We laughed about how many hours were spent inside our heads, hoping a boy would ask us to dance, or stewing over a big test, just doing everything we could to avoid even the most minor embarrassments.’

Michelle admitted that when she was a teenager, she wasn’t sure if other girls worried about the same things that she and her friends did.

‘When I was younger, I often wondered whether this kind of obsessive thinking was unique to me and my girlfriends, but I realize now that it was something every girl feels,’ she said.

Michelle’s daughter Malia, 20, is a sophomore at Harvard University, while her youngest child Sasha, 17, is finishing out her senior year of high school in Washington, D.C.

While she is keenly aware of the trials and tribulations teenage girls face, she believes young women today have more advantages. 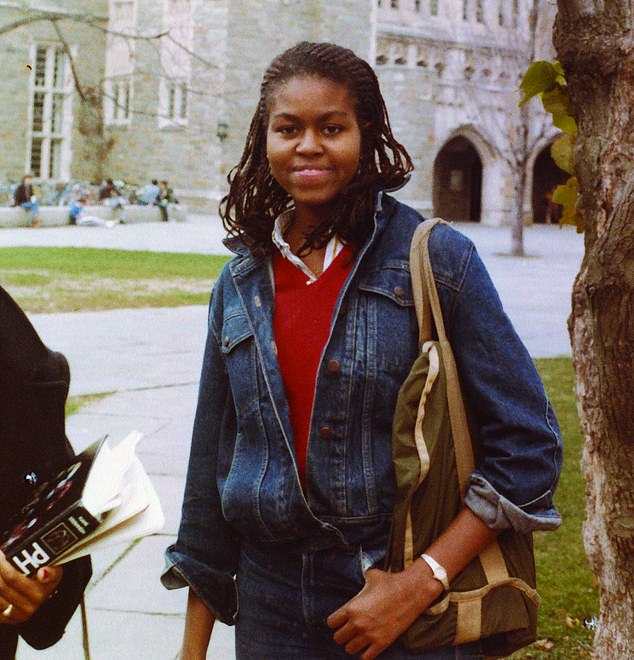 Candid: The former first lady, who grew up on Chicago’s South Side, admitted that she had ‘many doubts’ throughout her life 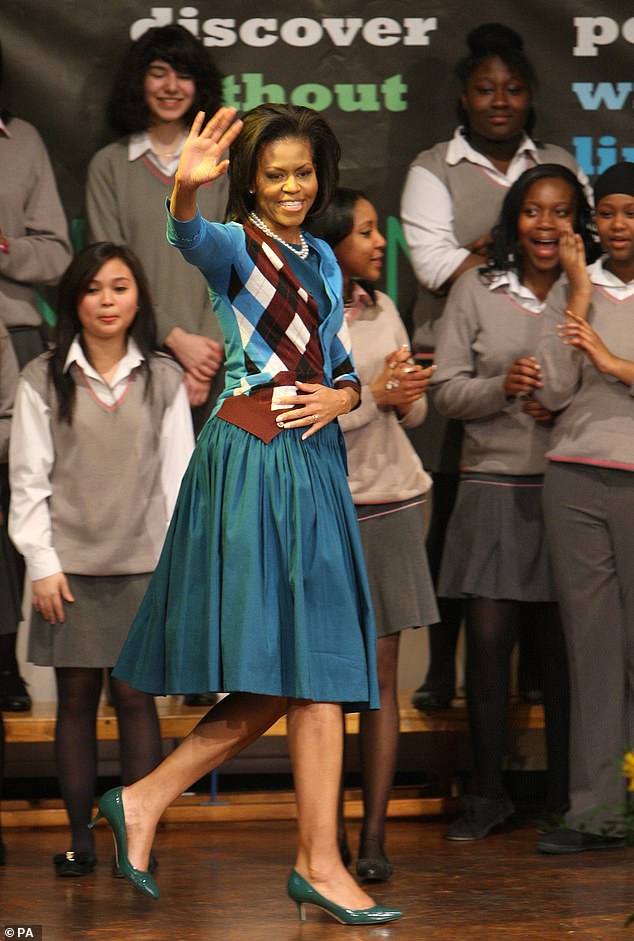 Role model: Michelle (pictured in 2009) said interacting with children and young people when she was first lady always made her ‘feel good’

‘What’s inspiring to me is that so many of the young women I’ve met…are triumphing in incredible ways,’ she said. ‘Unlike my generation, they’re not as held back by the societal belief that girls and boys can’t do the same things. They’re charging forward in sports and math and science and technology.

‘They’re speaking up and speaking out,’ she added. ‘They’re confident, unconcerned with old stereotypes, and there’s no telling what they’re going to accomplish in the years ahead.’

Michelle, who has been on tour promoting her New York Times bestseller, Becoming, revealed in Philadelphia last week that Sasha is interested in becoming a food critic.

She told Good Housekeeping readers that the ‘best advice’ she could give is for everyone to just ‘be themselves,’ but she understands that’s easier said than done, ‘particularly if you’re entering a new environment.’

‘I’ve had many doubts through my life,’ said Michelle, who grew up on Chicago’s South Side before attending Princeton University and later Harvard Law School. 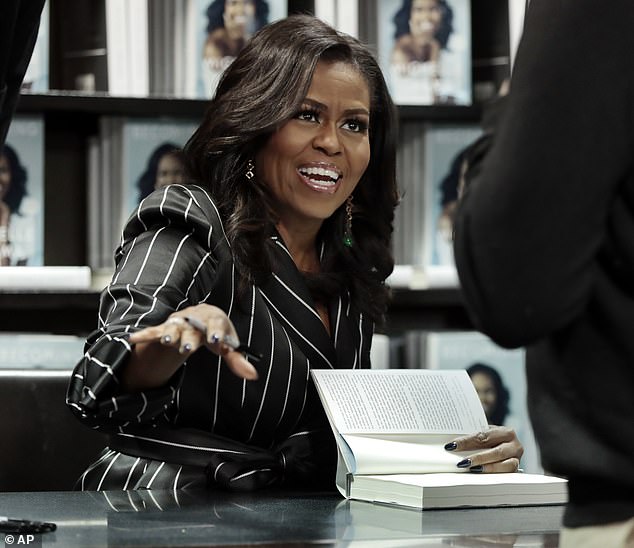 Busy: The author has been on tour promoting her New York bestseller, Becoming. She is pictured signing book sin New York on Friday 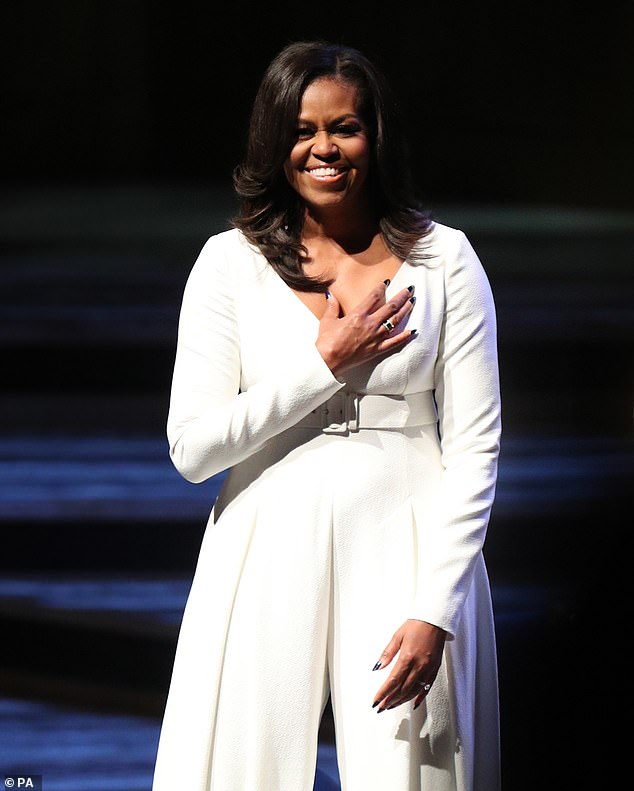 International tour: Michelle held a discussion at the Royal Festival Hall in London on Monday

‘They cropped up when I went to a high school across town and a college across the country, when I was a young lawyer in a high-rise law firm, when I took a leap of faith and allowed our family to venture into a Presidential race,’ she explained.

‘In all those moments, a chorus of doubts rang out inside my head: Do I really belong here? Am I good enough? But after a while, I realized that I had every reason to be in those environments.

‘I just had to trust my instincts and be myself — and then the rest would take care of itself.’

As for her time in the White House, she said it is ‘impossible to single out one day’ as the most fun or memorable, but she noted that interacting with children and young people always made her ‘feel good.’

‘We made sure that kids — ordinary kids, not just the kids of a donor or a Congressman — had access to folks like Justin Timberlake, Janelle Monáe and Smokey Robinson talking about the doubts and struggles they fought through, giving their time to inspire young people,’ she explained.

‘I’d walk away from those events so hopeful. Who knows what dreams these kids could have for themselves after that?’