Not lovin’ it! Shocking surveillance footage shows McDonald’s customer abusing staff and trashing the store after she received the wrong drive-thru order

Police are hunting a woman who assaulted a McDonald’s employee after a mix-up with her drive-thru order.

The violent incident occurred at the fast-food franchise in downtown Indianapolis back in August, with police releasing surveillance footage of the altercation on Tuesday in a bid to identify the culprit.

The five-minute clip begins with the woman – who sports bright red hair and is clad in a pink shirt – walking into the establishment with a bag of food and a receipt. She is not wearing a face mask, despite requirements to do so.

Footage shows the woman subsequently speaking to an employee at the counter, gesturing to her receipt and appearing to explain that there has been a mix-up with her order at the drive-thru.

However, the conversation quickly deteriorates, with the woman soon seen leaning over the counter and shouting in the worker’s face. 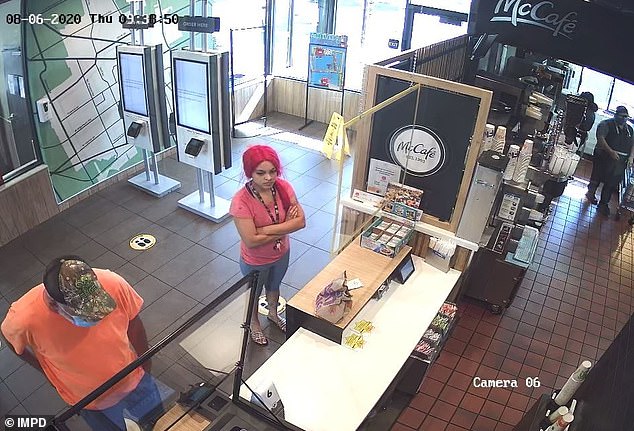 She’s not lovin’ it! Police are hunting  a woman who assaulted a McDonald’s employee after a mix-up with her drive-thru order. She is pictured in a pink t-shirt 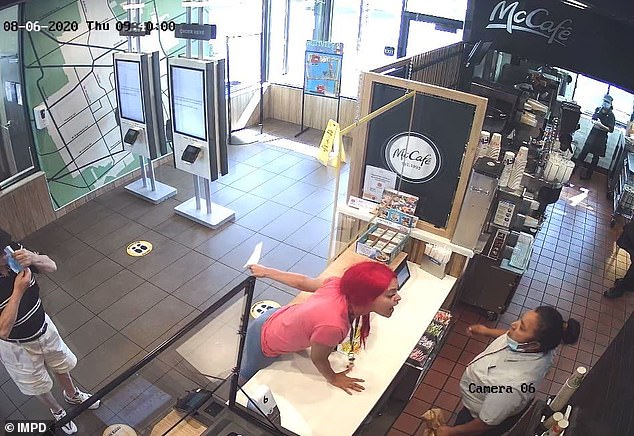 The employee appears to swat the woman out of the way – sending the hungry customer into a fit of rage.

The customer begins screaming at a group of employees huddled behind the cash register, before she throws a metal straw dispenser at them.

An elderly patron attempts to intervene and diffuse the situation.

However, his words are of little comfort to the enraged redhead who begins to pelt yellow ‘Cleaning In Progress’ signs over the top of the till into the kitchen. 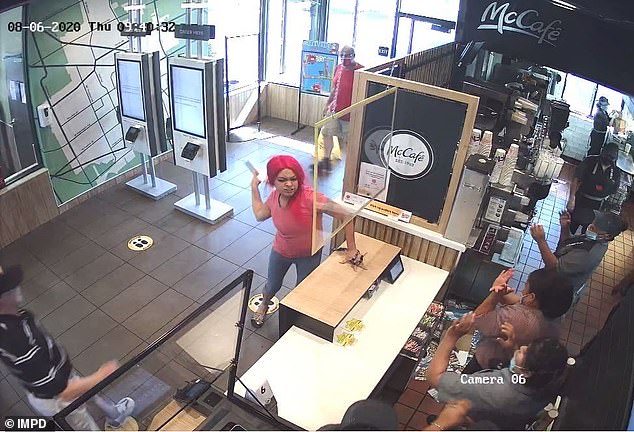 After a four minute temper tantrum, the woman storms out of the premises empty-handed – but not before she manages to destroy every piece of signage she can get her hands on.

One employee was left with a laceration to the face.

Police were called to the restaurant, but the woman had left the scene by the time they arrived.

Surveillance video shows her driving off from the McDonald’s in a silver sedan.

Police are offering a reward of up to $1,000 for information that leads them to identify the offender.

Anyone with information about this incident should call Crime Stoppers of Central Indiana at 317.262.8477 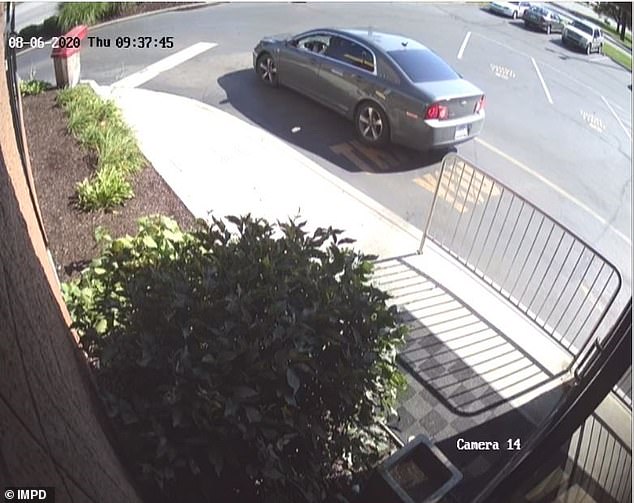