A RAGING Donald Trump has torn into Senator Toomey and praised the Pennsylvania judge who threw out his campaign's "stitched together" lawsuit.

The president's campaign praised US District Judge Matthew Brann's dismissal for "helping us in our strategy to get expeditiously to the US Supreme Court". 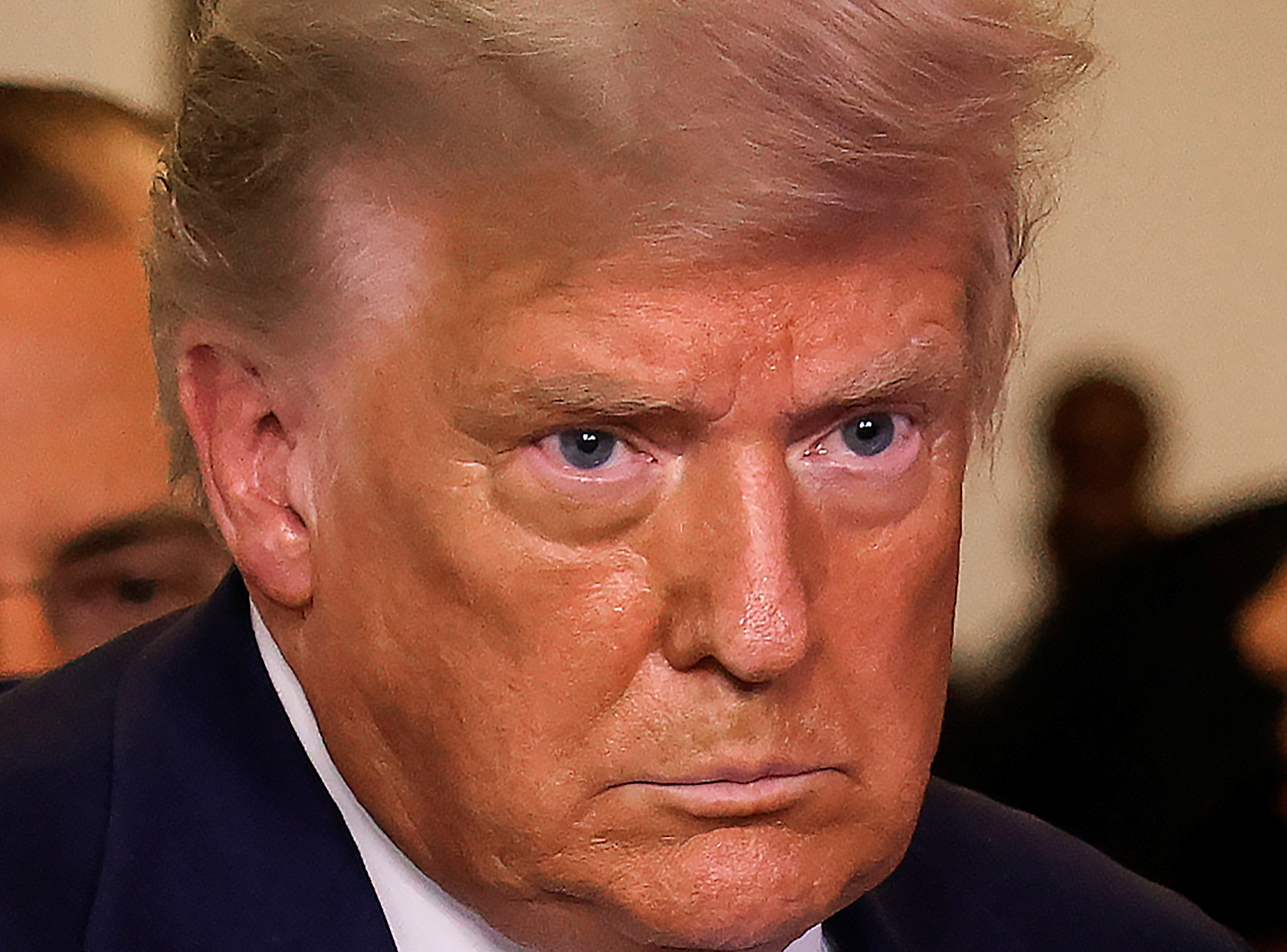 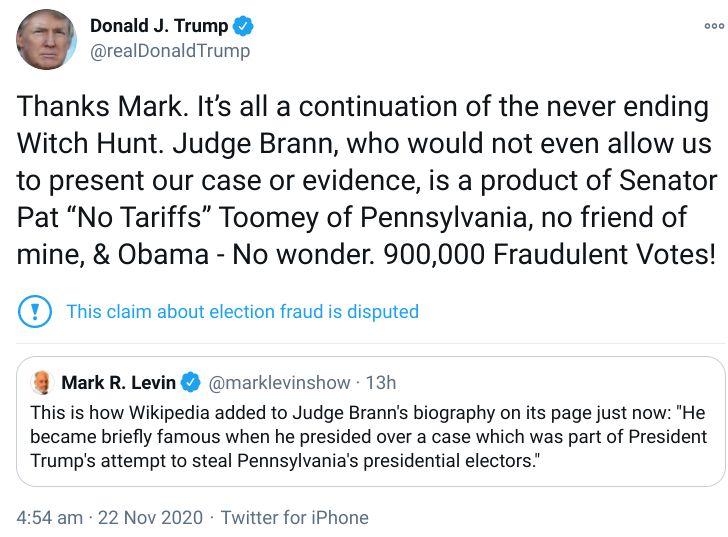 It reads: "Today's decision turns out to help us in our strategy.

"Although we fully disagree with this opinion, we're thankful to the Obama-appointed judge for making this anticipated decision quickly, rather than simply trying to run out the clock.

"We will be seeking an expedited appeal to the Third Circuit."

The statement added: "We are disappointed we did not at least get the opportunity to present our evidence at a hearing.

"We hope that the Third Circuit will be as gracious as Judge Brann in deciding our appeal one way or the other as expeditiously as possible.

"This is another case that appears to be moving quickly to the US Supreme Court." 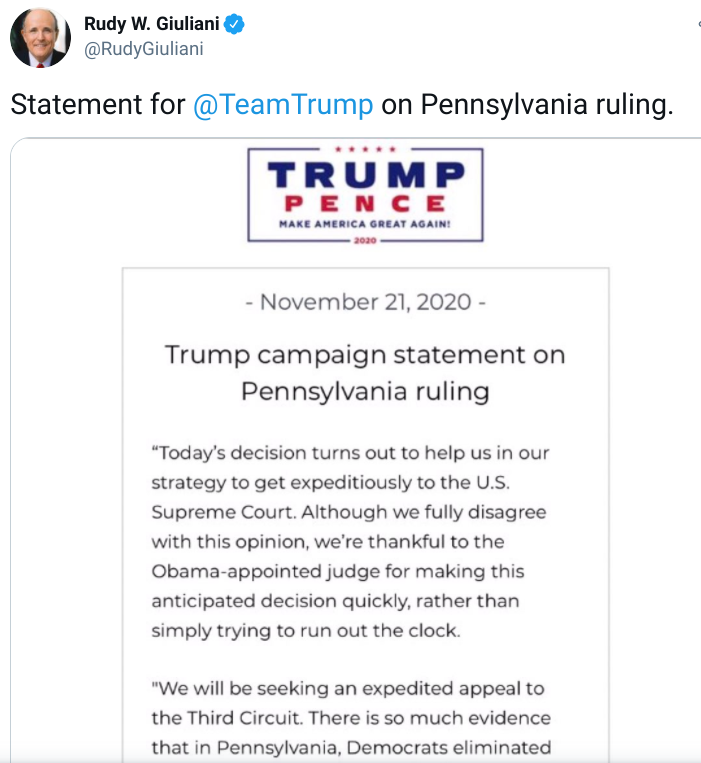 The statement coincided with Trump's rage on Twitter about a so-called "witch-hunt".

He seethed: "It’s all a continuation of the never ending Witch Hunt.

"Judge Brann, who would not even allow us to present our case or evidence, is a product of Senator Pat 'no tariffs' Toomey of Pennsylvania, no friend of mine, and Obama – no wonder. 900,000 Fraudulent Votes!"

Trump was responding to a tweet from Mark Levin, author and Fox News presenter of show Life, Liberty & Levin.

Levin tweeted that "Wikipedia added to Judge Brann's biography on its page just now: 'He became briefly famous when he presided over a case which was part of President Trump's attempt to steal Pennsylvania's presidential electors'."

Several other key Republican politicians slammed Trump, telling him to accept defeat as he continues to fight the election results.

Republican Rep Fred Upton of Michigan insisted the election is "over," fighting Trump and his teams' claims.

“You know what? The voters have spoken,” Upton told CNN's Inside Politics.

“No one has come up with any evidence of fraud or abuse."

Republican Gov Chris Christie of New Jersey told ABC that Trump needs to accept Biden as the winner – and called his legal team "a national embarrassment."

Speaking with CNN, GOP Gov Larry Hogan of Maryland said the US is "beginning to look like a Banana Republic."

“Frankly I’m embarrassed more people aren’t speaking up," Hogan said of Trump and his team trying to fight the results.

The furor comes as the judge appointed by Barack Obama dismissed the Trump campaign’s bid to throw out millions of mail-in votes in Pennsylvania – and slammed the "meritless” lawsuit in a scathing decision.

US District Court Judge Matthew Brann, who Obama appointed to the federal bench in 2012, ruled on Saturday that Trump’s campaign failed to prove that Republican voters' rights were violated in the November 3 election. 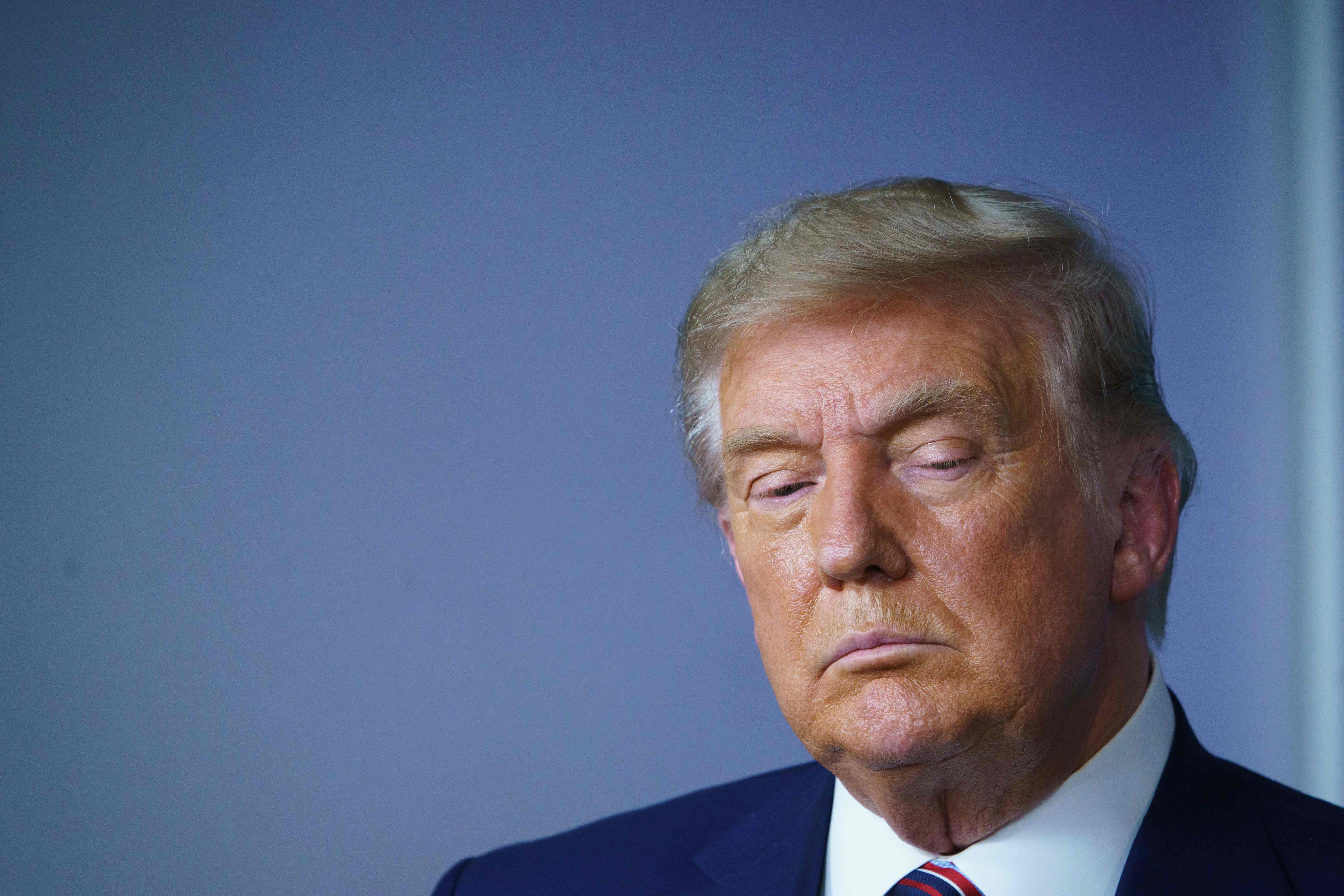 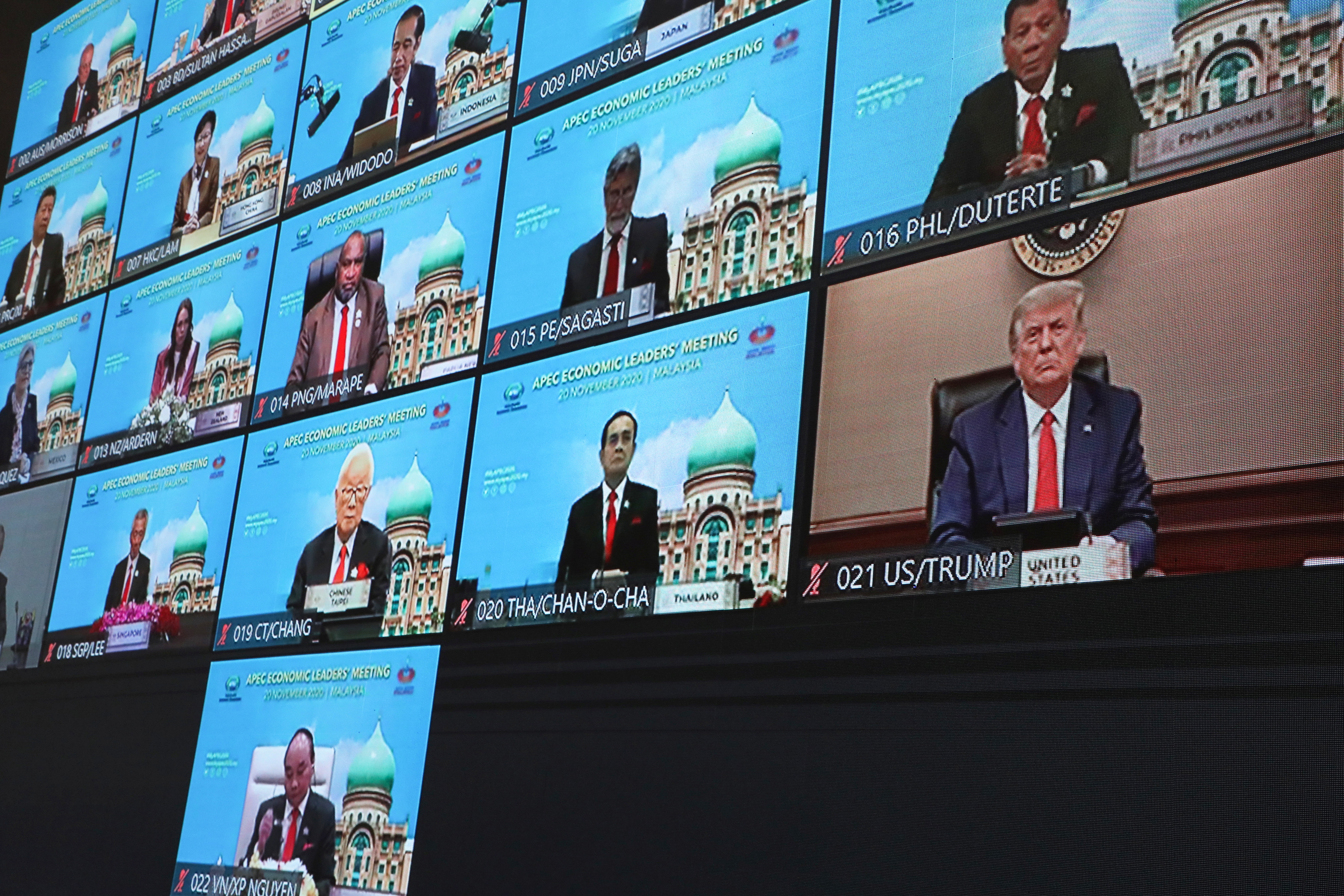 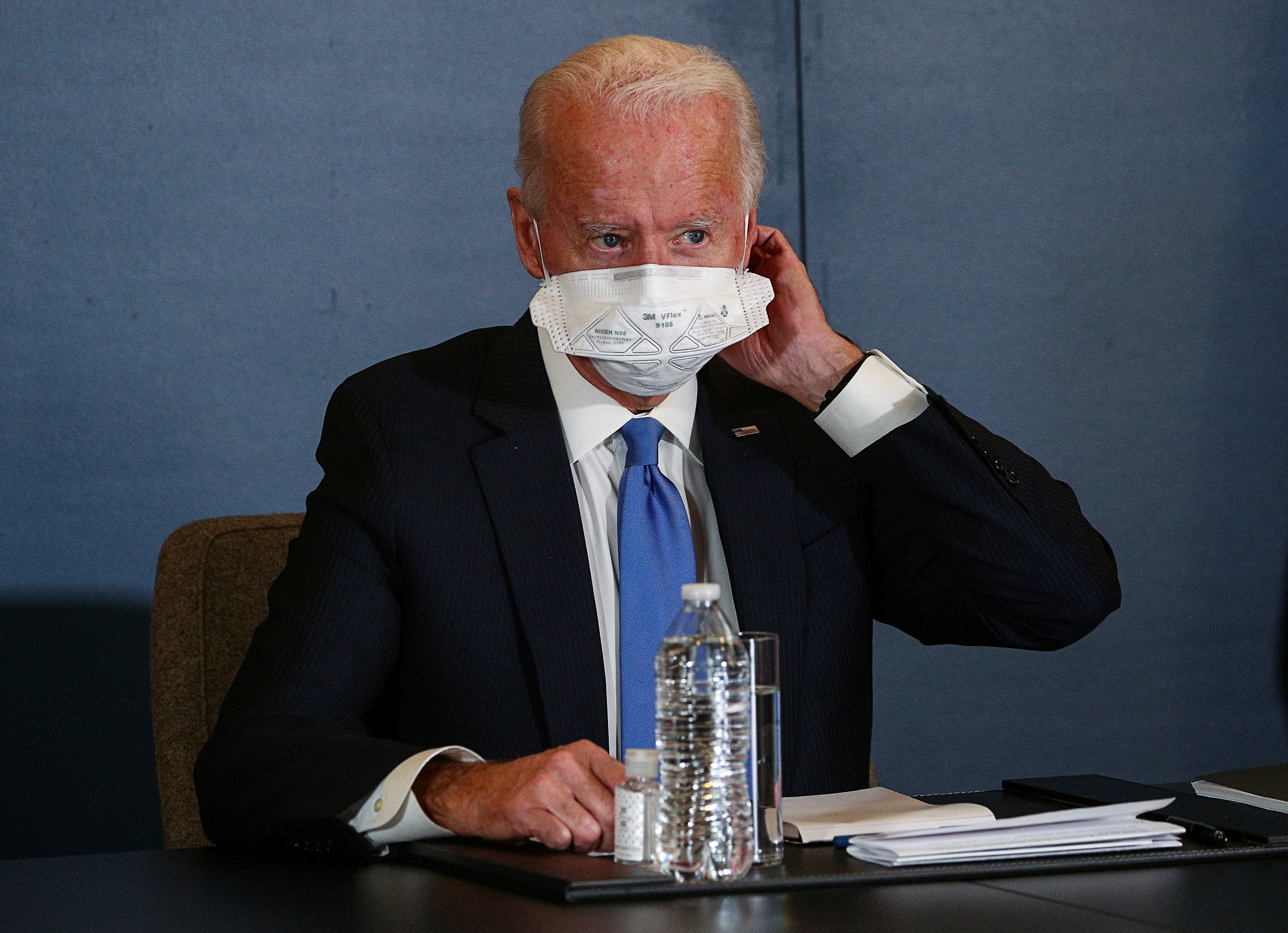 “This Court has been presented with strained legal arguments without merit and speculative accusations,” Brann wrote.

The judge added that he “has no authority to take away the right to vote of even a single person, let alone millions of citizens” and attacked the "stitched-together" lawsuit as "Frankenstein's monster."

Trump lost the election to Democrat Joe Biden, who served as vice president in the Obama administration.

"The Media is just as corrupt as the Election itself!" Trump tweeted after the judgement was published.

He also called on Republican state officials to reject the vote and appoint Trump friendly electors to hand him the victory in swing states.

"Why is Joe Biden so quickly forming a Cabinet when my investigators have found hundreds of thousands of fraudulent votes, enough to 'flip' at least four States, which in turn is more than enough to win the Election?" Trump tweeted.

"Hopefully the Courts and/or Legislatures will have the COURAGE to do what has to be done to maintain the integrity of our Elections, and the United States of America itself. THE WORLD IS WATCHING!!!" 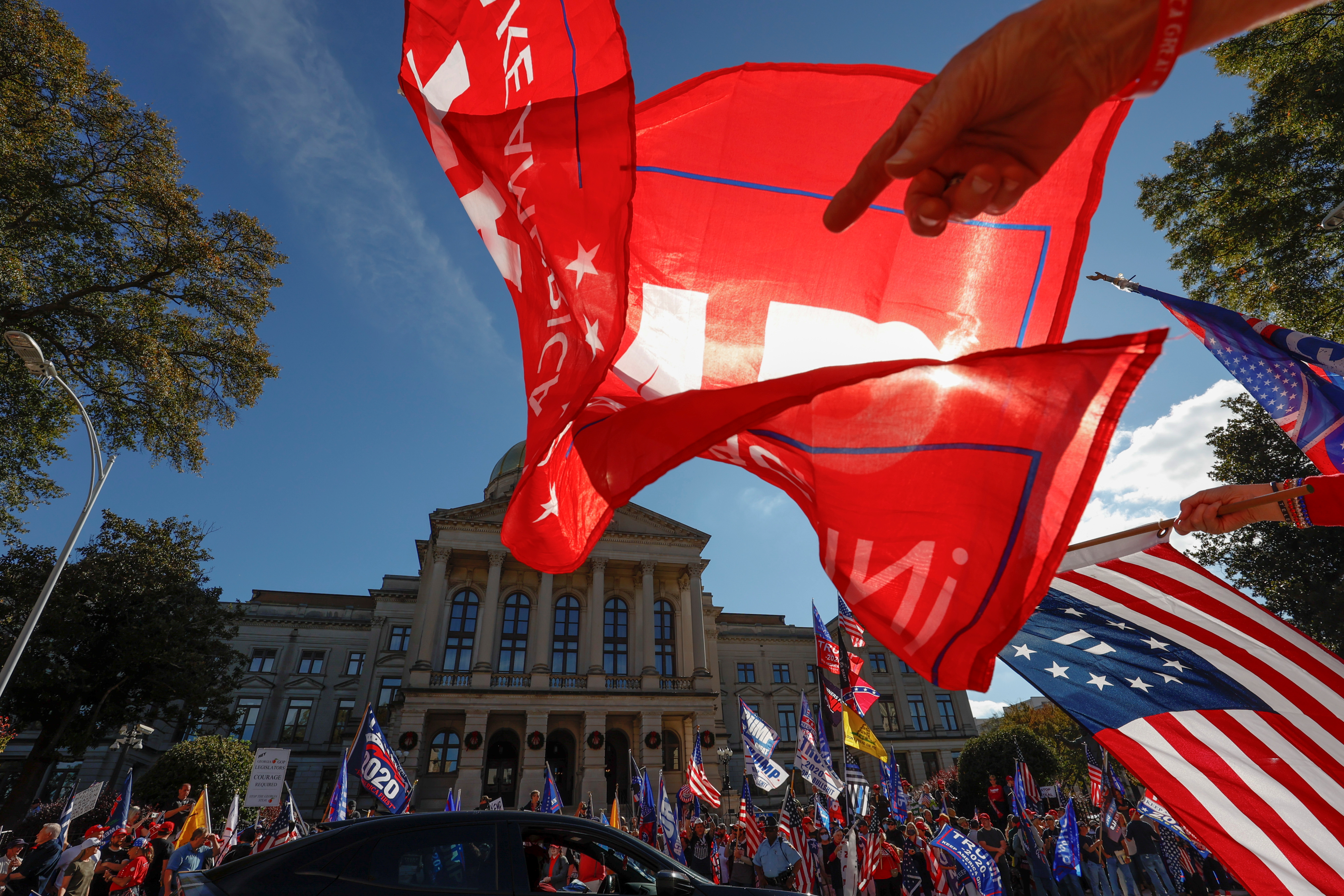 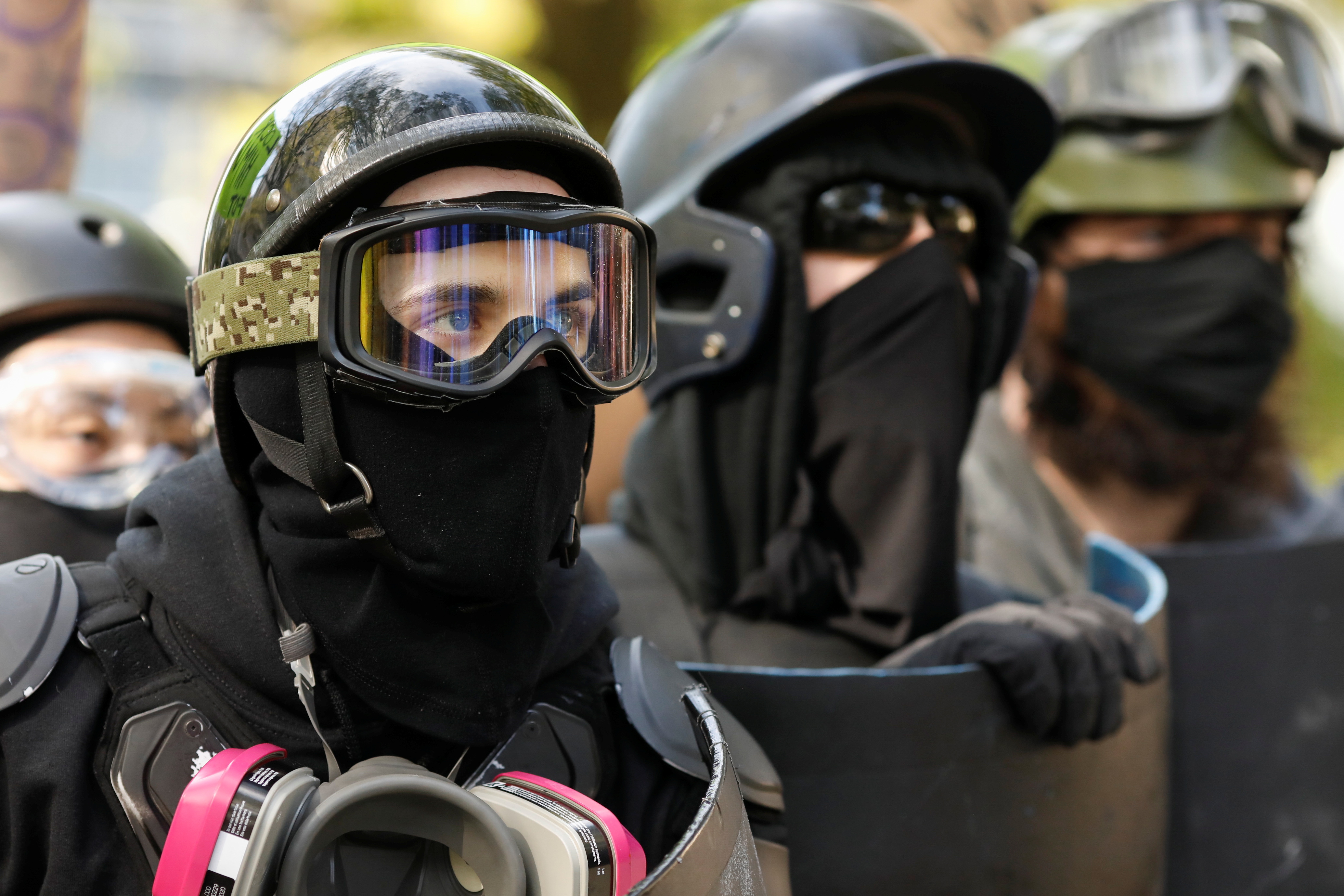 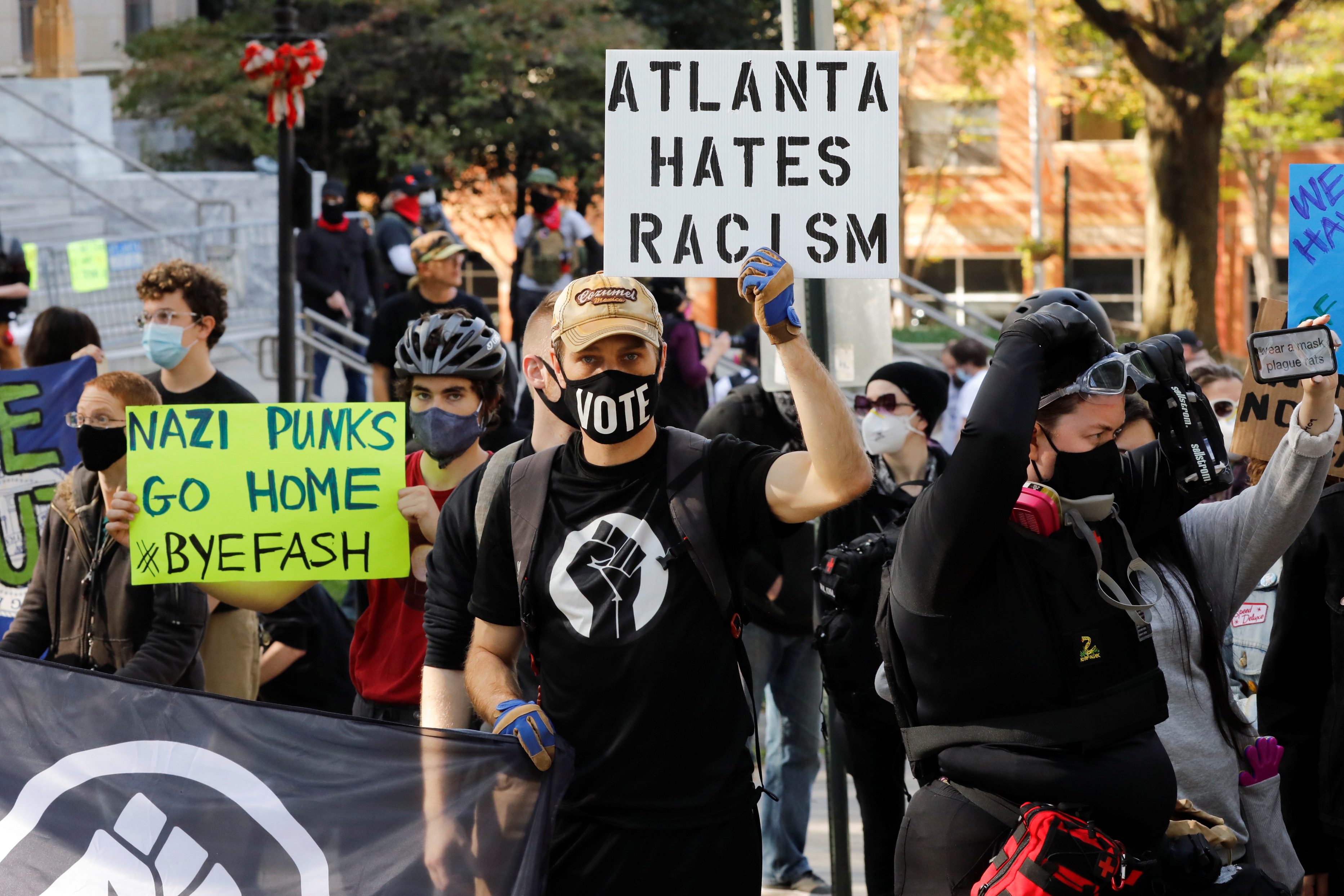 The Pennsylvania lawsuit, spearheaded by Trump’s personal lawyer Rudy Giuliani, argued that the Constitution's guarantee of equal protection was not upheld when counties in the state took different approaches to notifying voters of problems with their ballots before the vote.

However, the judge called some of thearguments made by Giuliani in court "unhinged."

Reacting to the defeat, Trump lawyer Jenna Ellis thanked the judge, claiming the decision helps their strategy to get the case "expeditiously to the Supreme Court."

She said the campaign would quickly appeal the decision to the Third Circuit court.

He went on to congratulate President-elect Biden on his victory.

Before the hearing, Pennsylvania Secretary of State Kathy Boockvar said in a legal brief that the Trump campaign's attempt to throw out millions of votes over alleged isolated incidents was far too extreme.

"There is no justification on any level for the radical disenfranchisement they seek," lawyers for Boockvar wrote in the brief.

Pennsylvania Attorney General Josh Shapiro said on Twitter following the ruling: “I’ve been telling everyone who will listen: these suits are baseless." 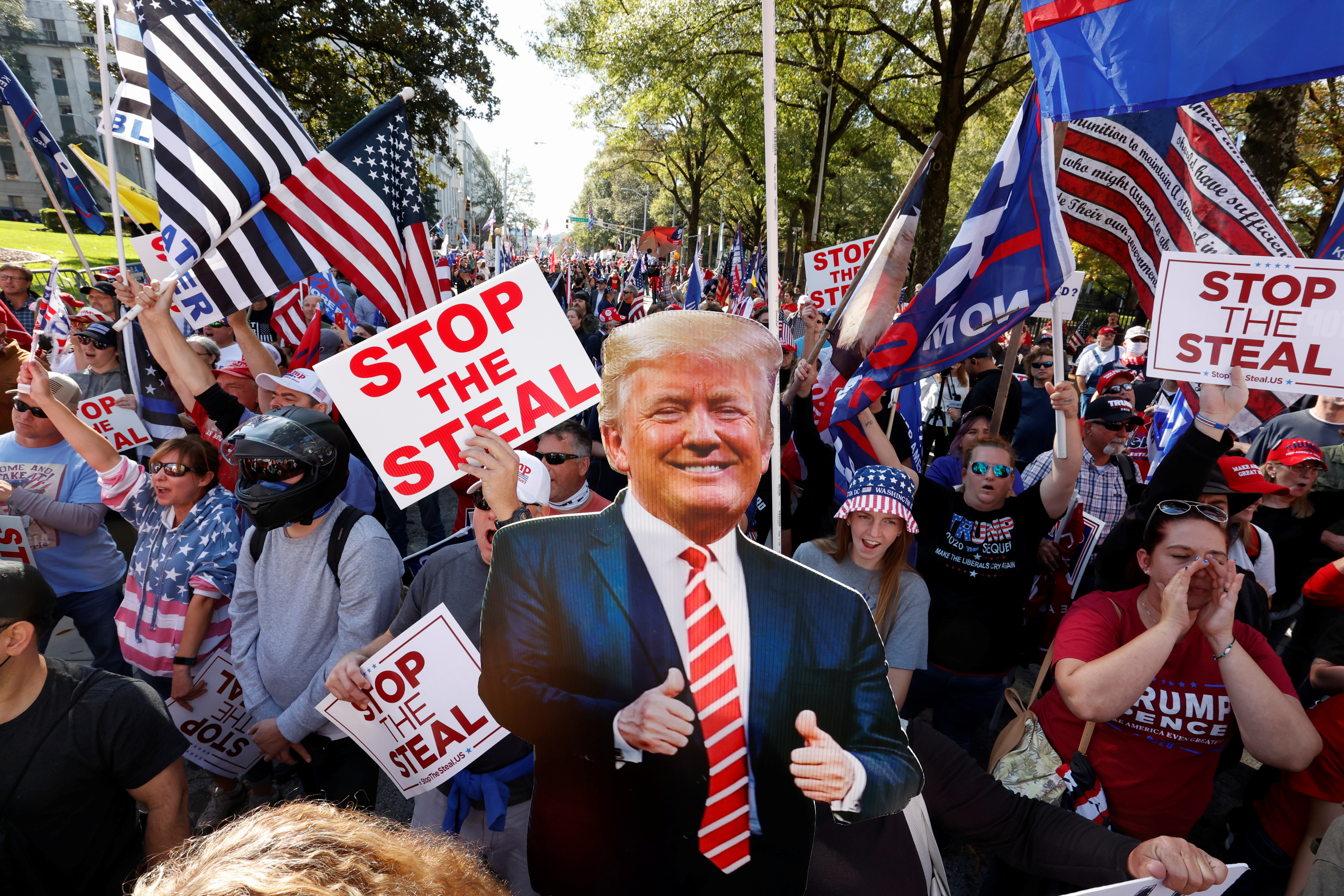 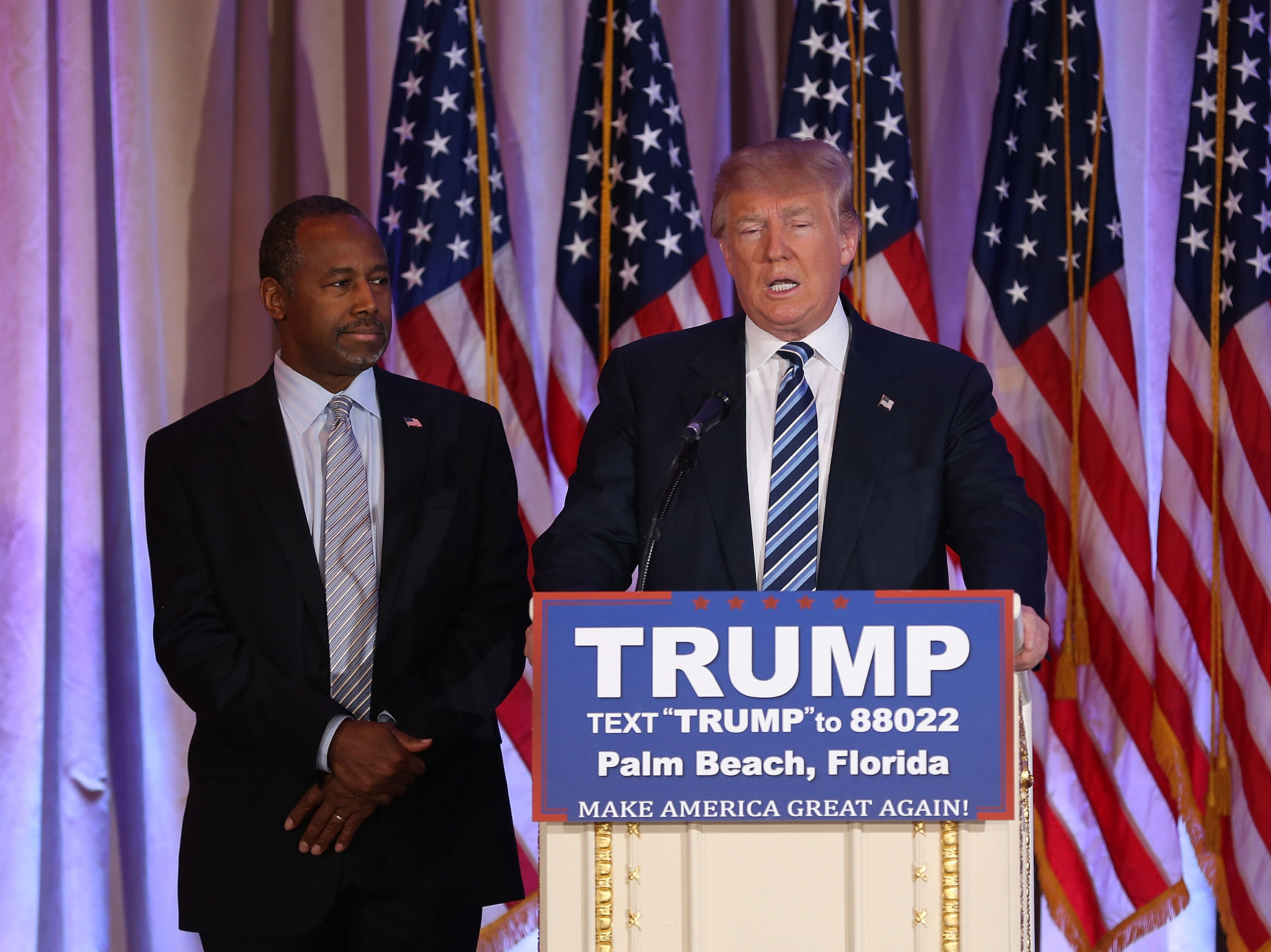 The lawsuit is one of dozens filed by Trump and his allies in the aftermath of the election.

They are also seeking to invalidate or change the results through recounts and direct pressure on lawmakers in several states.

The campaign has not provided evidence for its claims of widespread and coordinated electoral fraud.

Elections officials across the country have repeatedly said there is zero evidence of fraud that would alter the outcome of the presidential election.

A manual hand recount and audit in Georgia confirmed Biden on Friday as the winner in the southern state by more than 12,000 votes, making the former veep the first Democratic presidential candidate to win Georgia in nearly three decades.

Georgia Secretary of State Brad Raffensperger, a Republican, said on Friday that the numbers "reflect the will of the people.

"I believe that the numbers that we have presented today are correct," Raffensperger said.

Hundreds of supporters gathered at the statehouse in Atlanta on Saturday, with video posted online showing speakers denouncing the media for calling Biden the election winner, as well as state Republican leaders for certifying the results.

Police in riot gear were deployed to separate them from counterprotesters who gathered nearby.

In Michigan, Republicans on Saturday asked state authorities to wait to certify Biden’s victory for 14 days to allow for an audit of ballots in Wayne County, which includes the majority-Black city of Detroit.

The letter cited allegations of “irregularities” that have not been substantiated. Biden won 154,000 more votes than Trump in Michigan.

That effort faces long odds. A spokesperson for Michigan’s top election authority said state law does not allow for audits before the vote is certified, which is due to take place on Monday.

Allegations of widespread fraud have been found to be baseless, the spokesperson said.

Two leading Republican Michigan lawmakers who came to Washington at Trump’s behest said after meeting him on Friday that they had no information that would change the outcome of the election in the state.

In Wisconsin, an official said that poorly trained observers for the Trump campaign were slowing a partial recount by challenging every ballot and raising other objections.

“Observers are disruptive. They are asking question after question, telling the tablulators to stop, stop what they’re doing and that is out of line, that’s not acceptable,” Milwaukee County Clerk George Christianson told reporters.

Trump’s accusations have continued to inflame his hard-core Republican base.

The General Services Administration, run by a Trump appointee, has not recognized Biden’s victory, preventing his team from gaining access to government office space and funding normally provided to an incoming administration ahead of Inauguration Day on Jan. 20.

Critics say the delay and Trump’s refusal to concede have serious implications for national security and the fight against the coronavirus, which has killed nearly 255,000 Americans.